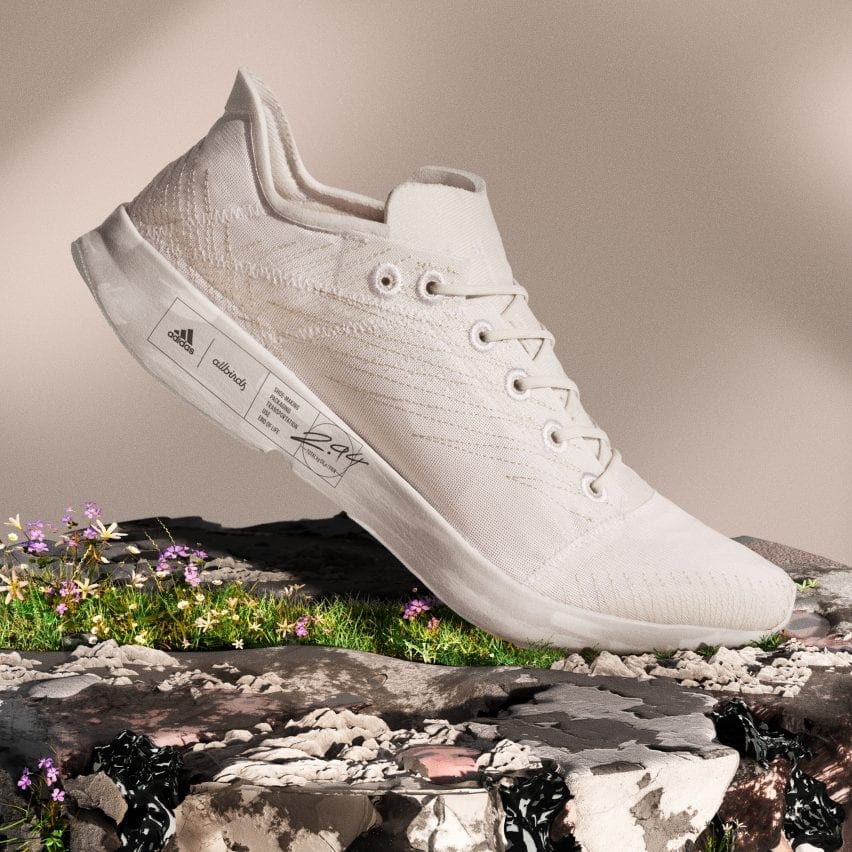 The race to tackle carbon emissions is being hampered by underinvestment in new plant-based materials, according to Hana Kajimura of Allbirds, which has launched a low-carbon trainer with Adidas.

“We lament how natural materials maybe don’t perform as well as synthetics,” said Kajimura, head of sustainability at the New Zealand footwear brand.

“But this is just because of the lack of investment and innovation in this space.”

The new collaboration with Adidas, called Futurecraft.Footprint, is the latest in a series of moves by the sneaker industry to reduce the carbon footprint of its products. The two brands believe it is the lowest-carbon trainer ever made.

Last year, Belgian brand Norm managed to whittle the footprint of its unisex 1L11 shoe down to 6.5 kilograms of carbon dioxide equivalent (CO2e) by using recycled plastic while Nike’s lowest-carbon trainer to date, the 2020 Space Hippie, weights in at 3.7 kilograms of CO2e.

The new Futurecraft.Footprint pushes this even lower to 2.94 kilograms of CO2e.

By contrast, the average sneaker emits around 13.6 kilograms of CO2e throughout its life and is constructed from 65 distinct components – most of them plastic.

But to create a zero-emission trainer, Kajimura believes the industry needs to invest in developing plant-based materials that are capable of storing carbon while rivalling the performance of petroleum-based plastics.

“We’ve been innovating on synthetics for decades, since the 1800s when we discovered and started drilling for oil,” she said.

“And we just haven’t placed that same amount of investment on natural materials and really figuring out how to increase their performance.”

Sneakers responsible for 1.4 per cent of all global emissions

Sneaker production is responsible for 1.4 per cent of all global greenhouse gas emissions compared to the 2.5 per cent that is contributed by air travel.

To mitigate this, Adidas has committed to going climate neutral by 2050 in line with the targets set out in the Paris Agreement.

So far, the brand has created an endlessly recyclable trainer and one made from recycled ocean plastic but has not revealed the carbon footprint of these products.

Now, the company has teamed up with footwear brand Allbirds, which has created its own carbon footprint calculator and has been declaring the emissions of all its shoes since last April.

The brand was also among the initial signatories of the B Corp Net Zero 2030 pledge, committing itself to reaching net-zero emissions 20 years ahead of the Paris targets.

Adidas and Allbirds worked together over the course of a year to develop the Futurecraft.Footprint trainer, which will be available in limited quantities from the end of 2021.

According to the brands, the sneaker emits 63 per cent less carbon throughout its life than a comparable running shoe such as the Adizero RC3, which emits 7.86 kilograms of CO2e.

“What’s really exciting about this project is that we were able to get from 7.86 to 2.94 kilograms in 12 months with stuff that’s completely available today,” Kajimura said.

“It basically proves that maybe we can’t get to zero with what exists today but we can get the majority of the way there. And if we can do that with this one shoe, imagine what that could do for the industry.”

According to Kajimura, simplifying the trainer as much as possible and reducing its components down to seven had the single biggest impact on its carbon footprint.

Among other things, the design cuts out the many layers of polyurethane (PU) foam that are normally used in trainers to support the runner’s foot and replaces them with a strategic embroidery pattern on the shoe’s upper.

The final Futurecraft.Footprint trainers weigh only 154 grams, around as much as a bar of soap.

“That really plays out across every element of the carbon footprint,” she said. “It doesn’t just help with the materials aspect but it means fewer transportation emissions and less energy use.”

The lining, laces, embroidery and 70 per cent of the upper are made from recycled polyester and a portion of the shoe is already made from natural and plant-based materials.

Tencel, a type of cellulose fibre derived from wood pulp, was used to form the remaining part of the upper, while 10 per cent of the outsole is made from natural rubber and the midsole, sock liner and tongue consists of between 18 and 28 per cent of a sugarcane-based bioplastic called SweetFoam.

But a significant part of the shoe is still made from virgin, petroleum-based plastics, such as the thermoplastic polyurethane (TPU) used to form more than 80 per cent of the midsole.

Senior Adidas designer Florence Rohart says this is currently still necessary to guarantee the performance of the running shoe.

“We want to have a shoe that allows runners to perform to their highest level,” she said.

“So having good durability, good responsiveness, [a structure that is] lightweight but strong enough – these are elements of designing for performance that define how low we can go.”

In the future, to get all the way to zero and beyond, Kajimura says more money needs to be poured into ensuring that natural, plant-based materials can fulfil these same performance requirements.

“It really requires innovation and it requires really focused investment in natural materials,” she said.

“To balance out whatever emissions are created in other parts of the shoe, the materials have to be carbon negative and act as carbon sinks.”