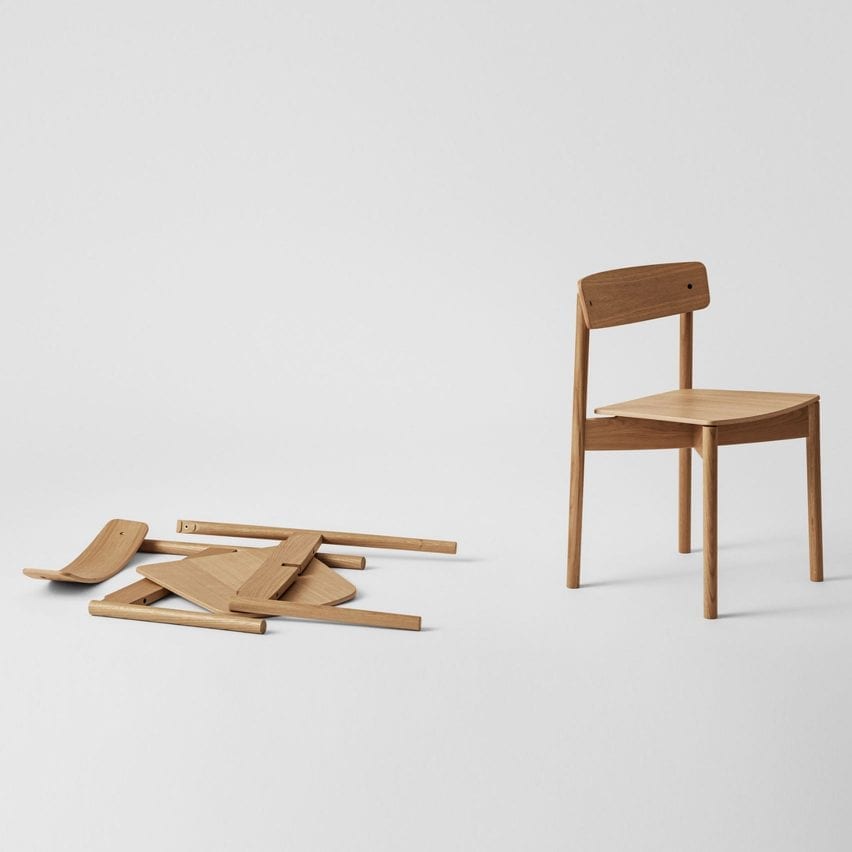 Danish furniture brand Takt is using design to eradicate carbon emissions from its products, according to founder Henrik Taudorf Lorensen.

By driving down CO2 emissions generated throughout the lifecycle of its products, the brand believes it can achieve net-zero emissions decades ahead of its former targets.

“We’ve committed to 2030 but I think we’ll be net-zero in two to three years,” Lorensen told Dezeen. “We’re at the point where we just need to get it documented and signed off.”

The company has signed up to the B Corp Net Zero 2030 pledge and committed to reaching net-zero 20 years ahead of the targets set out in the Paris Agreement.

“That’s the minimum we have to achieve,” Lorensen said.

All Takt’s products are made from FSC-certified wood as well as being flat-packed to reduce transport and packaging emissions.

The company claims it is the only design brand to consistently have all of its products certified with the EU Ecolabel and is also accredited as a B Corporation – an international certification for businesses with a social and environmental conscience.

“I think it proves to our customers that there’s a reality behind the promises,” Lorensen said.

Takt is basing its decarbonisation strategy on The Oxford Principles for Net Zero Aligned Carbon Offsetting.

These set out that a business must first reduce its emissions to as close to zero as possible before offsetting any residual emissions through projects that actively remove carbon from the atmosphere.

According to Lorensen, Takt got a head start on its net-zero goal by focusing on its products rather than its operations first.

“It’s not that difficult to look at the energy bills for your headquarters and see what the impact of that is but actually mapping out your products is potentially the hardest part,” Lorensen said.

A full assessment of Takt’s headquarters in central Copenhagen will be undertaken in the near future but Lorensen believes any emissions discovered in the process will be negligible.

“We know our headquarter operations run on renewable resources, so I feel we are quite close [to reaching net-zero],” he said.

Takt has created its own calculator to work out the carbon footprint of its products.

This is based on supplier data about how much CO2 is emitted at every stage of a product’s lifecycle, from the sourcing and refining of the raw materials to estimates of any emissions associated with its transport, maintenance and ultimate disposal.

“I have a background as a scientist, so it was important to me to start measuring things,” Lorensen said. “The starting point was to get a grasp of the impact of the choices we’re making.”

For example, using FSC-certified wood for the Cross Chair designed by Pearson Lloyd reduced CO2 emissions from its materials by half.

Designing the product for self-assembly had a similar impact on the carbon footprint associated with the chair’s transport, according to Lorensen.

“If we hadn’t packed our furniture flat, it would have multiplied the CO2 footprint of the transport by seven or eight times,” he explained. “So those initial learnings were important.”

This data is made available to the public via Takt’s website, much like a nutrition label is displayed on food items, to help customers gain a sense of what materials and processes are associated with the most emissions.

Internally, the calculator is used by the Takt team to continually drive down the CO2 footprint of its designs.

“It’s just tremendously useful once you get into it and really starts to make a culture change in terms of how we are developing new products,” Lorensen said.

“Now that we have this mapped out, we can actually calculate what the expected CO2 footprint will be of a product when we see the first drawing. And we can already start to reengineer the products at that point.”

Beyond the production stage, data about lifetime emissions also helps Takt to address other carbon hotspots in the lifecycle of its products.

Lorensen is looking at the company’s packaging in particular, which he says can often make up the largest single contributor to a product’s carbon footprint outside material sourcing and refining.

This is due to Takt’s use of recycled cardboard, which has to be skinned, boiled and re-pressed in an energy-intensive process.

“Cardboard is not a big sinner in terms of carbon but once you decrease the other variables, that does pop up as the next one,” Lorensen said.

“I think it’s almost like a continual race – once we find a good solution to decrease those packaging emissions, there’ll be something else that pops up.”

Once a product’s footprint is reduced as much as possible, Takt offsets any remaining emissions by investing in carbon removal projects via Finnish marketplace Puro.

These projects pull CO2 from the atmosphere and sequester it in wood building elements for a minimum of 60 years.

The platform counts only the carbon that is actively removed and stored in the building elements, rather than any theoretical savings that are made by replacing more polluting materials such as concrete.

“What differentiates Puro is they calculate the net negative impact of the stuff they’re selling and they don’t take in all kinds of side effects,” said Lorensen. “This is important so we don’t overstate the impact.”

Takt’s commitment to offsetting all emissions created by its products has the added benefit of giving the design team a financial incentive to minimise their carbon footprint as much as possible.

“We call it our own little carbon tax,” Lorensen said.

“It’s almost like a concrete cost that sits there. And if we make smarter choices, we can minimise that cost,” he added.

“I think it’s so important to understand that with sustainability, there’s no end goal. It’s an ongoing process.”

The post Furniture brand Takt will be "net-zero in two or three years" says founder appeared first on Dezeen.