Iconic moments from the Euros celebrated on beer mats by David Shrigley, Pentagram and more 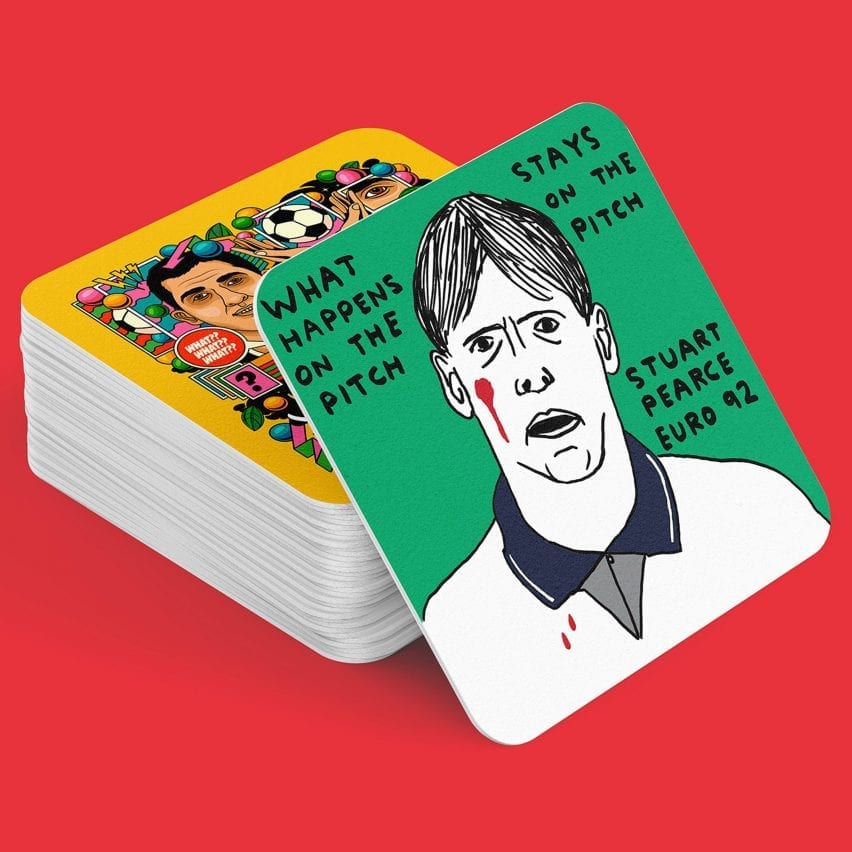 Each beer mat shows a different moment from the history of the UEFA European Championship – commonly known as the Euros – from strange goal celebrations to bizarre occurrences.

The competition takes place every four years between the senior men’s national teams from countries that are members of the Union of European Football Associations (UEFA).

The Weird Euros project is a follow-up to Weird World Cup, a project initiated three years ago by graphic designers Gordon Reid, founder of Middle Boop, and Callum Stephenson.

The pair came up with the concept while watching a game and discussing their favourite World Cup moments. Working with some of their favourite designers, they created a collection of beer mats that ended up raising £20,000 for charity.

This time around, they have pulled together an even more impressive list of collaborators.

“We definitely had more of a strategy this time round,” Reid told Dezeen.

“We were very strict about who we invited as we wanted to make sure we had artists that represented all or most of the key countries from the Euros, had varied styles and all created work with a witty and dry sense of humour.”

Pentagram partner Astrid Stavro has created a matching pair of designs, calling either heads or tails, to mark a semi-final in 1968 that was decided by a coin toss.

David Shrigley’s design features England defender Stuart Pearce, who was left with a bloodied cheek after being head-butted at Euro 92.

“It was a total surprise when he popped up with that illustration and it’s amazing,” said Reid.

Israel Kujore’s design pays tribute to a goal celebration by Italian centre-forward Mario Balotelli. After scoring a penalty that would take his team through to the final of Euro 2012, Balotelli took off his shirt and flexed his torso like a bodybuilder.

“An absolute no no was to pick any moments that were great goals or iconic celebrations,” said Reid.

“What makes them a bit different are those moments that people all over the world would have seen and vaguely remembered as being weird and/or funny.”

“There are so many and the more we dug, the more moments we found,” he added.

“Artists helped a lot this time too; there were a few times where I’d thought I’d exhausted our list and then someone would come up with a corker.”

Other highlights include Ben Tallon‘s image of Paul the Octopus, who correctly predicting several results in Euro 2008, and Mina Owen‘s depiction of David Beckham skying a crucial penalty kick in Euro 2004.

“The illustration of that moment is executed perfectly,” said Stephenson. “The beer mat takes me back to that penalty shootout horror show, but the illustration makes me smile and remember the moment in a funnier light.”

Reid and Stephenson have teamed up with the Adidas Football Collective on the project, allowing them to raise money for a range of grassroots football charities including Goals 4 Girls and FC Not Alone.

“The aim is to open up the game to everyone, everywhere, and use football as a catalyst for change in local communities,” added Reid.

“We believe that, through football, we have the power to change lives,” he added. “Working with Adidas Football Collective, we believe they are the driving force for that change. Their work will create opportunities and tear down barriers, opening up the beautiful game to everyone.”

The post Iconic moments from the Euros celebrated on beer mats by David Shrigley, Pentagram and more appeared first on Dezeen.