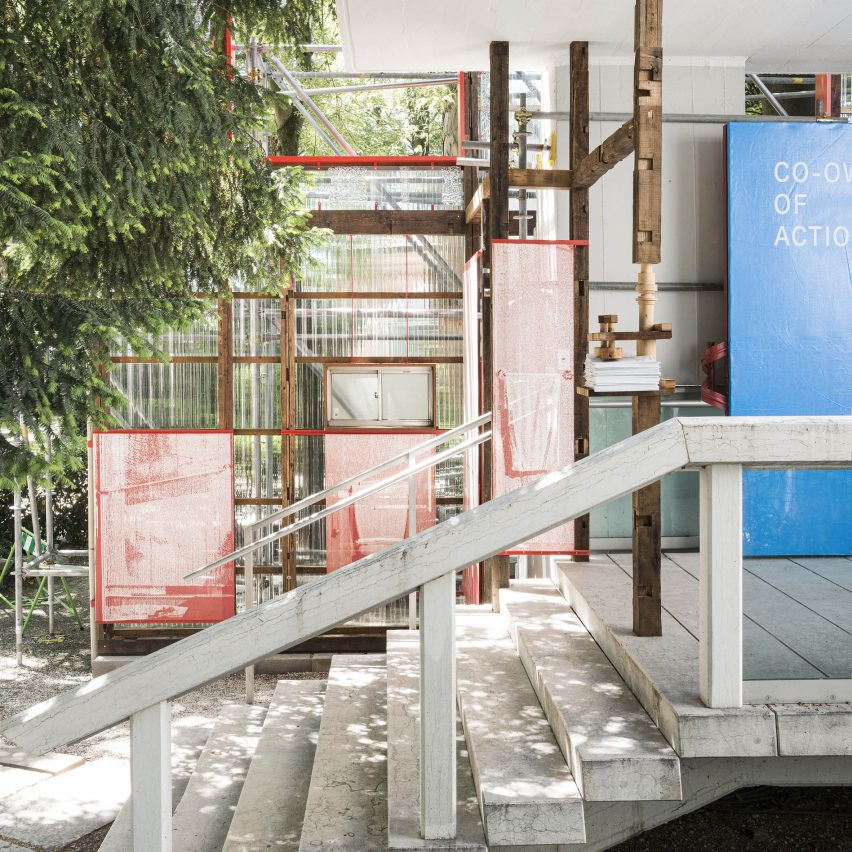 Japan has sent the dismantled remains of a 65-year-old house as its contribution to the Venice Architecture Biennale, staging an exhibition that explores the potential for material reuse.

Titled The Co-ownership of Action: Trajectories of Elements, the exhibition on the terrace of the Japanese Pavilion features benches made from the old house’s roof and screens constructed from its exterior walls.

Inside, yet-to-be-reused elements of the house are lined up on display as if in a warehouse.

Prompted by the 2021 Venice Architecture Biennale theme, How will we live together?, curator Kozo Kadowaki and his team wanted to explore sustainable alternatives to two waste-generating architectural practices: house demolitions and international exhibitions.

The team’s answer was to rescue materials from the scrap heap in a way that honoured and documented their past, while also giving them a future. It sees this as a “co-ownership of architectural production” generated through movement and reconstruction.

“Over the past few years, while participating in the Salone del Mobile Milano and other international events, I have been questioning the way international exhibitions should be held, especially when people have the tools such as Instagram and Facebook to communicate with the world whenever they want,” said Nagasaka, who is the founder of Schemata Architects.

“Of course, it’s important to actually see the works to scale with our own eyes, but in this day and age I personally think it is more suitable to inquire individually if you find specific works you are interested in, and you can visit the place where the works were actually created and have one-on-one conversations with artists or designers,” he added.

It was while considering these questions that the curator invited Nagasaka to participate in the Venice Biennale exhibition, commissioned by The Japan Foundation.

“As a member of the participants, I told him that if I were to be involved, I would like to create an exhibition that would make people understand the meaning of moving,” Nagasaka said. “This idea was well received and shared by everyone.”

“In addition, we all agreed that if we were going to use new materials, we should make an exhibit using scrap materials that were being destroyed and thrown away.”

The materials they found to rescue are from the 65-year-old Takamizawa residence, a house that was set for demolition in front of Kadowaki’s own home. They named it after the property’s first owner.

The building contained layers of material from different periods generated by decades of renovations and expansions — developments that are documented as part of the Co-ownership of Action exhibition.

The materials also have a future after the biennale, as there are plans for them to be used as part of a community facility for residents of an apartment complex in the suburbs of Oslo, Norway.

As well as the exhibition space in the courtyard and the material storage area inside, the Japanese Pavilion incorporates a workshop, which the team is using to explore the potential to reuse wood for furniture production.

Having devised a lathe process using a circular saw, they have shaped wood posts from the house into interesting forms, while leaving parts of them raw and untouched.

“The aged posts and beams, the distortions and scratches on them, all appear as rich expressions,” said Nagasaka.

The Co-ownership of Action: Trajectories of Elements will be on display in the Giardini as part of the Venice Architecture Biennale, which takes place from 22 May to 21 November 2021. See Dezeen Events Guide for all the latest information you need to know to attend the event, as well as a list of other architecture and design events taking place around the world.

Photography is by Alberto Strada.