Valdís Steinarsdóttir makes jelly clothing that can be melted and remade 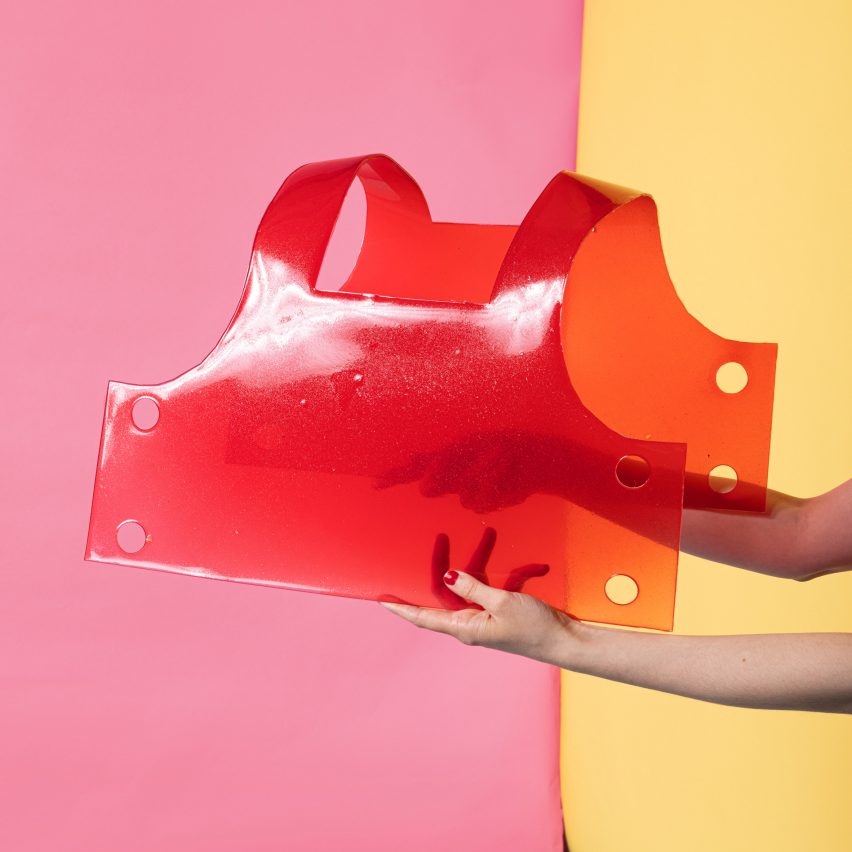 Icelandic designer Valdís Steinarsdóttir has created a range of translucent, gelatinous garments that are cast into moulds rather than cut from a pattern in a bid to eliminate waste.

The vest tops, which are being presented as part of the DesignMarch festival in Reykjavík, are made using either gelatin or agar – a gelling agent derived from red algae.

Once worn down or no longer needed, they can be melted down to create new garments using the same material as part of a closed-loop system.

“This method of making clothes definitely challenges us to stop and rethink our current manufacturing methods,” Steinarsdóttir told Dezeen.

“It proposes a technique that eliminates excess scraps and synthetic materials.”

Every year, the fashion industry produces more than 60 billion square metres of textile waste as sewing patterns are cut from large rolls of fabric.

Designers like Royal College of Art graduate Danielle Elsener have attempted to tackle this issue by creating zero-waste pattern masters that maximise the number of elements that can be cut from a given piece of fabric.

But Steinarsdóttir has circumvented the issue entirely by using a liquid-based material, made by mixing one of the two gelling agents with water, natural dyes and sugar alcohol to create different levels of flexibility.

This is then cast directly into a mould in the shape of the finished garment. The process generates no waste and only uses the exact amount of material that is needed to produce a given garment.

The material is left to cure and solidify for around a day and needs no seams or stitches to hold it together.

“With the right treatment, I get a result that is very plastic-like,” Steinarsdóttir said.

“I find it exciting to use natural materials to replace synthetic ones but still keep the plastic-like texture and feel, to make something that’s in fact natural but looks unnatural.”

According to Steinarsdóttir, the finished vest tops are durable and can last for “quite some time”.

But if the wearer grows tired of them or starts to notice wear and tear, the material can simply be heated to a certain temperature, reliquefied and re-cast into a fresh item.

“I would like people to be able to use the material as often as possible and take responsibility for treating the material in a way that will make it last,” she said.

“If you then feel that the material has reached the final stage in its life cycle, you can let it biodegrade.”

By adding different patterns to the mould, any desired texture can be transferred onto the jelly clothing in the process of curing.

The moulds themselves were designed to be adapted for multiple applications.

“The mould used to form the clothing is modifiable so you can adjust the size and shape of the clothing you are making,” the designer explained. “I think of the mould like a puzzle, so you can take out or add pieces to it.”

Steinarsdóttir is currently experimenting with symbiotic cultures of bacteria and yeast (SCOBY) to achieve a similar result. She also hopes to collaborate with fashion designers to find more uses for the material beyond just tops.

“It will be interesting to see what items of clothing will come out of such collaboration,” she said. “I believe there are many possibilities left to explore using this method of production.”

Previously, the designer has repurposed waste animal skin and bone from the meat industry to create bioplastic packaging and a series of jet-black vessels.

Both dissolve in hot water and biodegrade within a matter of weeks.

DesignMarch is Iceland’s largest design festival, taking place from 19 to 23 May 2021 in various locations across Reykjavík. See Dezeen Events Guide for an up-to-date list of architecture and design events around the world.

The post Valdís Steinarsdóttir makes jelly clothing that can be melted and remade appeared first on Dezeen.