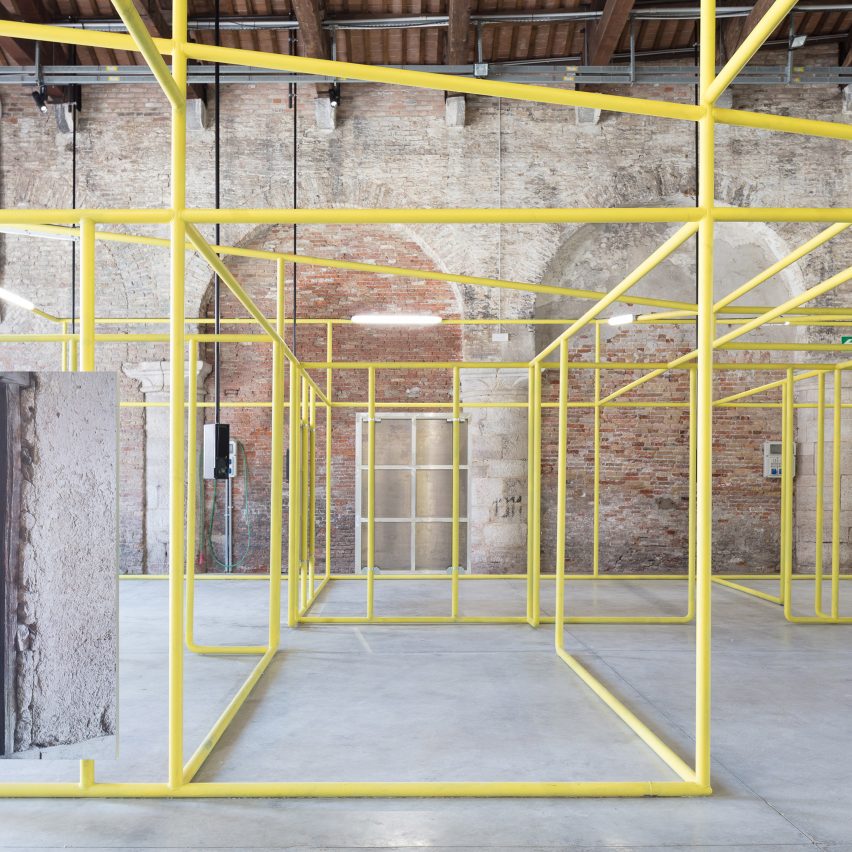 A full-scale replica of a house in an Uzbek mahalla aims to highlight a historic and endangered form of community living in the Republic of Uzbekistan’s first contribution to the Venice Architecture Biennale.

Called Mahalla: Rural Urban Living and curated by Emanuel Christ and Christoph Gantenbein of Swiss practice Christ & Gantenbein with Victoria Easton, the pavilion grew out of a project led by the team at ETH Zurich researching and documenting mahalla.

Broadly describing a particular type of neighbourhood, community or district, mahalla are areas centred on communal or family ties with their own distinctive forms of low-rise, high-density housing, domestic spaces and urban streets, with many regional variations existing across Central Asia and the Arab world.

These neighbourhoods are a vital part of Uzbekistan’s cultural heritage, originally built around Islamic rituals before becoming self-governing areas that were then placed under state control by the Soviet Union. Today they are run by government-regulated committees.

There are currently over 9,000 mahalla in Uzbekistan, each with between 150 and 6,000 inhabitants. Due to their lack of modern infrastructure and economic pressures, the existence of many is threatened by new housing developments.

Responding to Venice Architecture Biennale curator Hashim Sarkis‘ theme of How Will We Live Together?, the curators see the mahalla as having the potential to “offer urban society a sustainable and ecological model.”

“Mahalla is a social, cultural and urban phenomenon,” explains Emanuel Christ. “It could be a very rich and interesting hint and indication to where a global contemporary society could find a vision, information and inspiration.”

This project draws on the extensive research and documentation of mahalla created during a trip to the Uzbekistan capital Tashkent by ETH Zurich, where the team collaborated with local researchers and students from the CCA Lab at the city’s Centre for Contemporary Art.

“‘Mahalla: Urban Rural Living’ is primarily an academic project and a survey,” the studio told Dezeen. “It is a project carried by the people in Uzbekistan, where Christ & Gantenbein is acting as an interpreter that provides a methodology and a systematic approach.”

Located in the Arsenale, the abstract full-scale model of a mahalla house is made from yellow steel tubes and enlivened by a soundscape recorded by Spanish filmmaker Carlos Casas and images by Dutch photographer Bas Princen.

Also included are works by the CCA Lab, including a tapchan – a traditional item of outdoor seating often found in the courtyards of mahalla – and contemporary interpretations of traditional embroideries.

An accompanying phone app using point-cloud models of mahalla is intended to further immerse visitors in the areas evoked by Casas’ soundscapes, and a catalogue published by Humbolt books draws together the research of ETH Zurich and the CCA Lab.

“Our survey project on the Mahalla is closely related to the 2021 Architectural Biennial’s question, and we are convinced that it can be understood at least as a proposal of an alternative form of living together in dense urban environments,” Christ & Gantenbein said.

“Via our research, which was conducted with our partners in Uzbekistan, the awareness of the Mahalla has been dramatically boosted even before today’s opening of our exhibition in Venice.”

In 2018, Emanuel Christ’s and Christoph Gantenbein’s architecture studio Christ & Gantenbein were named Architect of the Year by Dezeen Awards.

The studio’s work includes this museum for swiss chocolate-makers Lindt and this pavilion with a corrugated metal roof and retractable walls.

Mahalla: Rural Urban Living will be on display in the Arsenale as part of The Venice Architecture Biennale, which takes place from 22 May to 21 November 2021. See Dezeen Events Guide for all the latest information you need to know to attend the event, as well as a list of other architecture and design events taking place around the world.

Photography is by Giorgio De Vecchi and Giulia Di Lenarda.