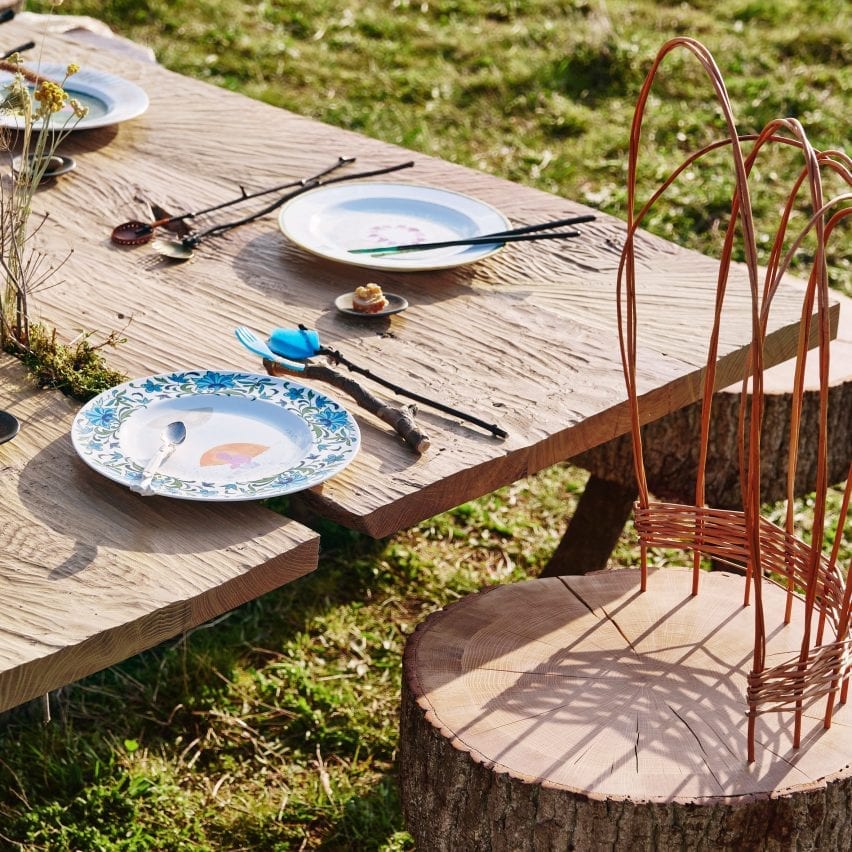 All forms of life on Earth, from humans to animals, plants and fungi, are given an equal seat at the table in the Refuge for Resurgence installation by London studio Superflux.

On view as part of this year’s Venice Architecture Biennale, which opens on 22 May, the project encompasses a dinner set-up for an imagined banquet.

A four-metre-long table has been carved from wild oak alongside 14 different stools and table settings that were customised for 12 different species of flora and fauna.

It was designed for a speculative, post-Anthropocene future, in which plants and wildlife have reclaimed our cities and mankind has learned to celebrate its dependence on other lifeforms.

“If we are going to navigate the predicament of the climate crisis with urgency, we will need to change our perspectives and mindset,” Superflux co-founder Anab Jain told Dezeen.

“If we don’t consider ourselves in relation to the wider ecology we will continue to degrade the world on which we all depend,” she continued.

“By extending an invitation to dine together with other species, the intention is to start to see other non-humans as equals, and to acknowledge the roles we all play in ensuring that our rich, complex, biodiverse planet continues to thrive.”

This idea is translated into a “multi-species dining experience” for three humans – a man, woman and child – alongside 11 other species that represent a cross-section of life on earth.

Among them are mammals, birds, insects and reptiles, as well as farm animals and species such as rats, wasps and fungi that are traditionally considered pests.

Although no live animals will be present at the installation, Superflux is set to bring a taxidermy raven, a wasp nest and a foraged conk mushroom to the table as their proxies.

Each imagined participant is presented with a different food offering, accompanied by bespoke cutlery made from materials such as avian bones or rusted circuit boards that could feasibly be foraged in a post-apocalyptic world.

“Our story is a myth-in-the-making, in which we wanted to give every species at the table the level of love, care and attention we give to ourselves,” explained Jon Ardern, who founded Superflux alongside Jain.

“The cutlery was created from found materials and is intended for use by humans to present ceremonial offerings to each species.”

“We’re drawing on ideas of folklore, mythology, the transformative potential of ritual and ceremony,” Ardern added. “This is an invocation and a prayer for a different kind of world.”

The installation will be presented underneath the arches of the Venice Arsenale from 21 May, accompanied by the sound of a poem that will tell the story of the banquet.

A trio of LCD screens will be suspended above the table to form an artificial triptych window, with a view rendered by 3D artist Sebastian Tiew showing a flooded city and ruined buildings that have been taken back by nature.

A sister installation at the Vienna Biennale for Change will open later this month. Called Invocation for Hope, the exhibition will see Superflux erect an indoor forest of 400 burnt and blackened pines within Vienna’s Museum of Applied Arts.

In previous projects, which range from surveillance drones to installations envisioning Singapore in 2219, the studio has offered a more practical view of how climate change and future technologies will change the way we live.

“Thus far, we’ve adopted an approach of speculative realism in a lot of our work,” Jain explained.

“However, a mythopoetic approach can give form to aspirations that are often present in the cultural ether but not always apparent,” she added.

“There is something powerful about engaging on a direct physical and emotional level that you don’t always get from a more straightforward explanation. It stays with you.”

Photography is by Mark Cocksedge.

The 2021 Venice Architecture Biennale is taking place from 22 May to 21 November in various venues across the city. See Dezeen Events Guide for an up-to-date list of architecture and design events taking place around the world.