Designer Nicole McLaughlin has collated an anthology of her viral upcycling projects, which see everyday items transformed into wearable pieces of design. Here, she shares her six favourite projects from the book.

McLaughlin rose to popularity on Instagram and has worked with brands from Hermès to Prada. The designer crafts fashion and accessories from ordinary items such as mismatched charity shop trainers, used shower curtains and croissants she’s about to eat for breakfast.

Shoe Case shortlisted for Design of the Year

She often cannibalises her own projects by taking them apart once they’ve been photographed to give the materials another purpose.

“All of my projects have a life beyond what the pictures show because I’ll use the leftover scraps for something else,” she told Dezeen.

“A lot of my pieces don’t even exist anymore because I take them apart and turn them into something else to continue their lifespan, so I upcycle my own upcycle,” she added.

Her Shoe Case, which was shortlisted for the 2020 Design of the Year awards, is a suitcase clad in trainer scraps that were subsequently reused to create a vest before being turned back into a suitcase to be exhibited at London’s Design Museum.

“I always try to start a conversation”

Unlike other upcycling projects, which typically try to hide the former life of their constituent materials, McLaughlin delights in drawing attention to the overlooked items she has resurrected.

“Mine is a very entry-level way to upcycling: you see it, you know what it is and you might even be able to make it yourself,” she said.

“I feel like I’m doing my job when I’m getting people excited about the possibilities of upcycling because if everyone was thinking this way, then I think we’d be in a better place.”

“Sometimes when we talk about the future of fashion and the environment, it’s such a dark place,” McLaughlin added. “So I feel like I always try to start a conversation but in a fun and light-hearted way.”

Below, she shares six highlights from her self-titled anthology, published by Just an Idea Books with a foreword by musician Pharrell Williams. The first edition of the book was released in April, with a second coming out in June. 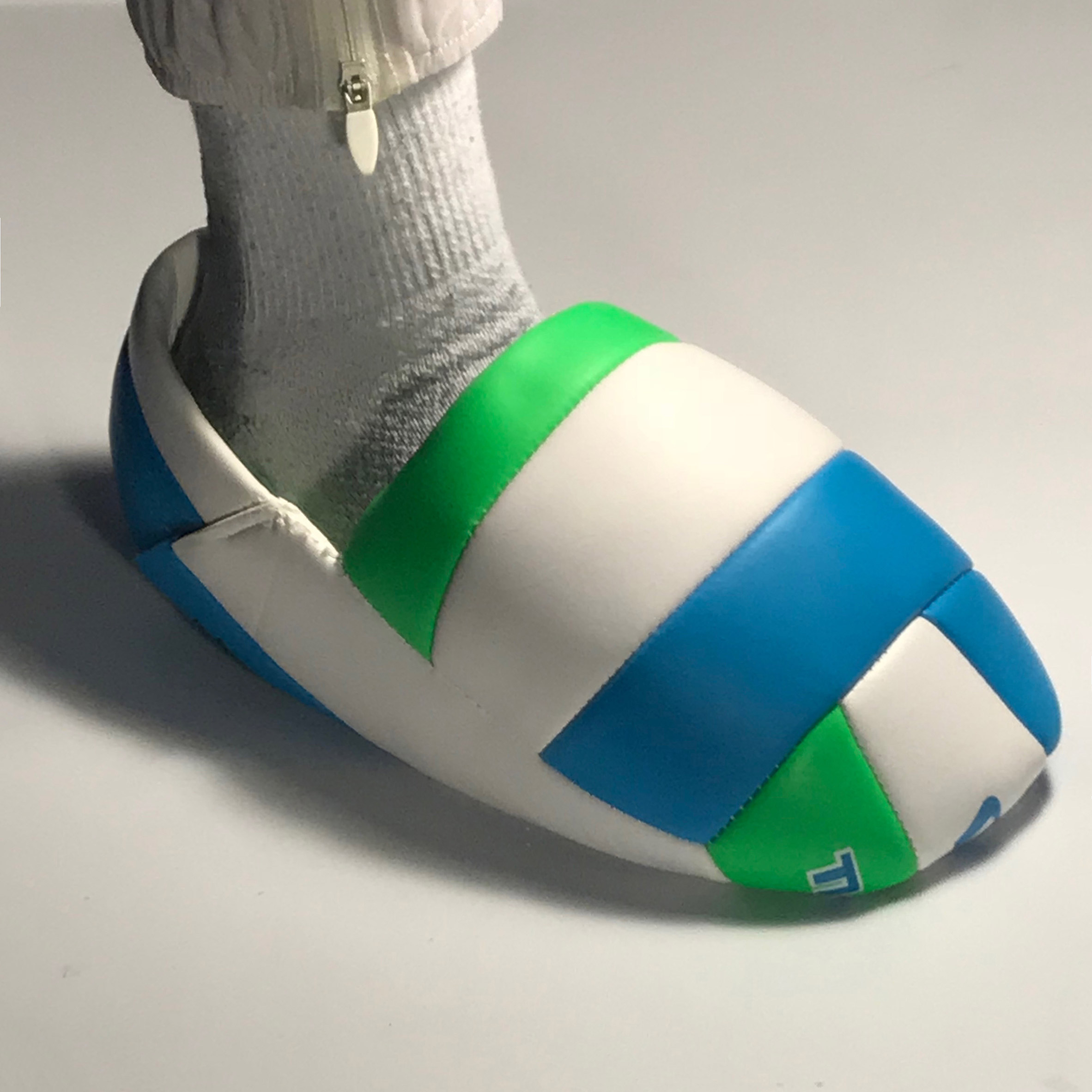 McLaughlin, who started her career as a graphic designer at sportswear brand Reebok, fashioned her earliest upcycling projects from unwanted samples and second-hand clothing.

These Volleyball slides, created in 2018, marked her first foray into using everyday objects that would not traditionally be upcycled or taken out of their functional context.

“At the time I didn’t know how to sew, I was glueing and cutting and trying to slap things together,” she said. “So I removed the stitching that held the volleyball together and just re-stitched through the same holes.”

“That’s a technique I go back to a lot because I don’t ever want to transform something so much that it’s not recognisable,” she added. “I really try to keep the integrity of the original design and shift it just enough that it’s something new.” 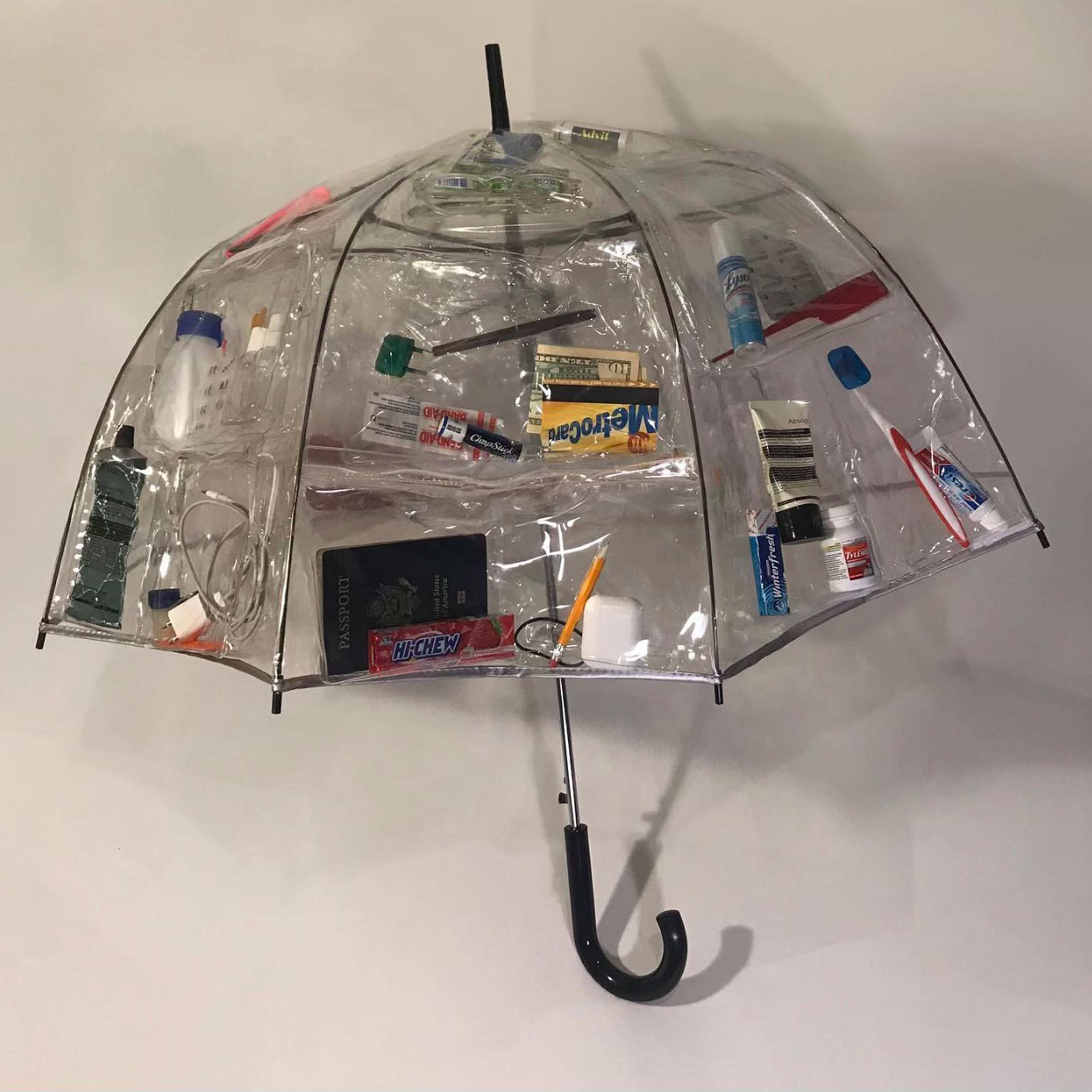 Although McLaughlin’s work resembles post-modern artworks, most of the pieces are fully functional.

This clear umbrella provides tactical storage for travel essentials, from a MetroCard to a toothbrush, and is made out of the designer’s own used shower curtain.

“I was buying these clear shower curtains and I would get the use out of them and then find a way to maximise it,” she said.

“Shower curtains are something that gets thrown away pretty often but they’re not something that you would traditionally upcycle. You would probably think it was super gross but I found ways to clean it and get it looking nice again.” 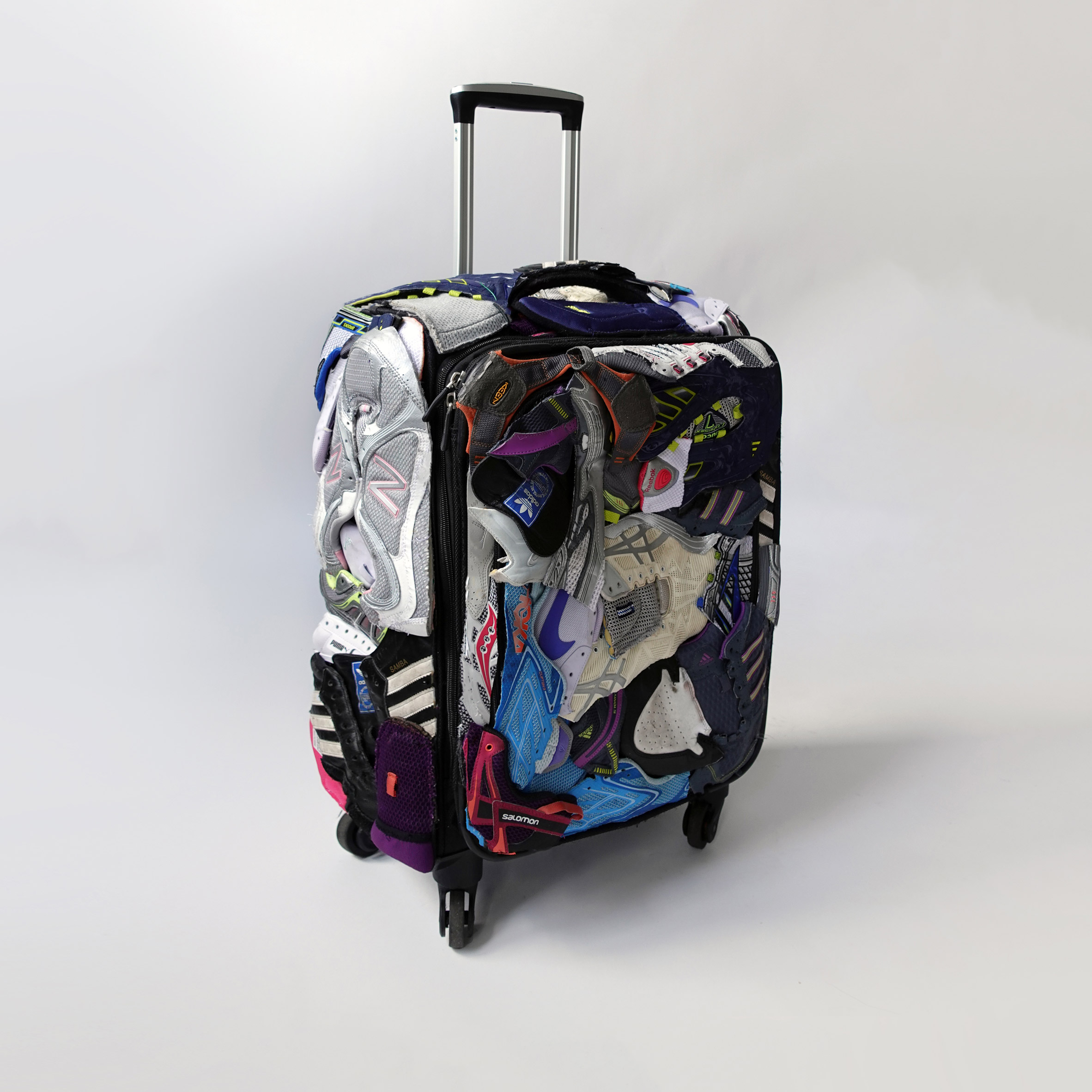 Shortlisted for last year’s Design of the Year award, the Shoe Case gives new life to one of McLaughlin’s old suitcases by covering its holes with a patchwork of different trainer parts.

She sourced the mismatched shoes from a local charity shop and sewed them together by hand over the course of 15 hours, using a clear fishing line to avoid having to colour-match threads to all the different shoes.

“It’s like a puzzle, just mapping out colours, finding balance and being able to use a bunch of logos together in a harmonious way,” she said.

“I have a technique for taking apart shoes, and sneakers in particular have a really good, strong upper. Then there’s the foam backing and the tongue – there are so many details that you can use.” 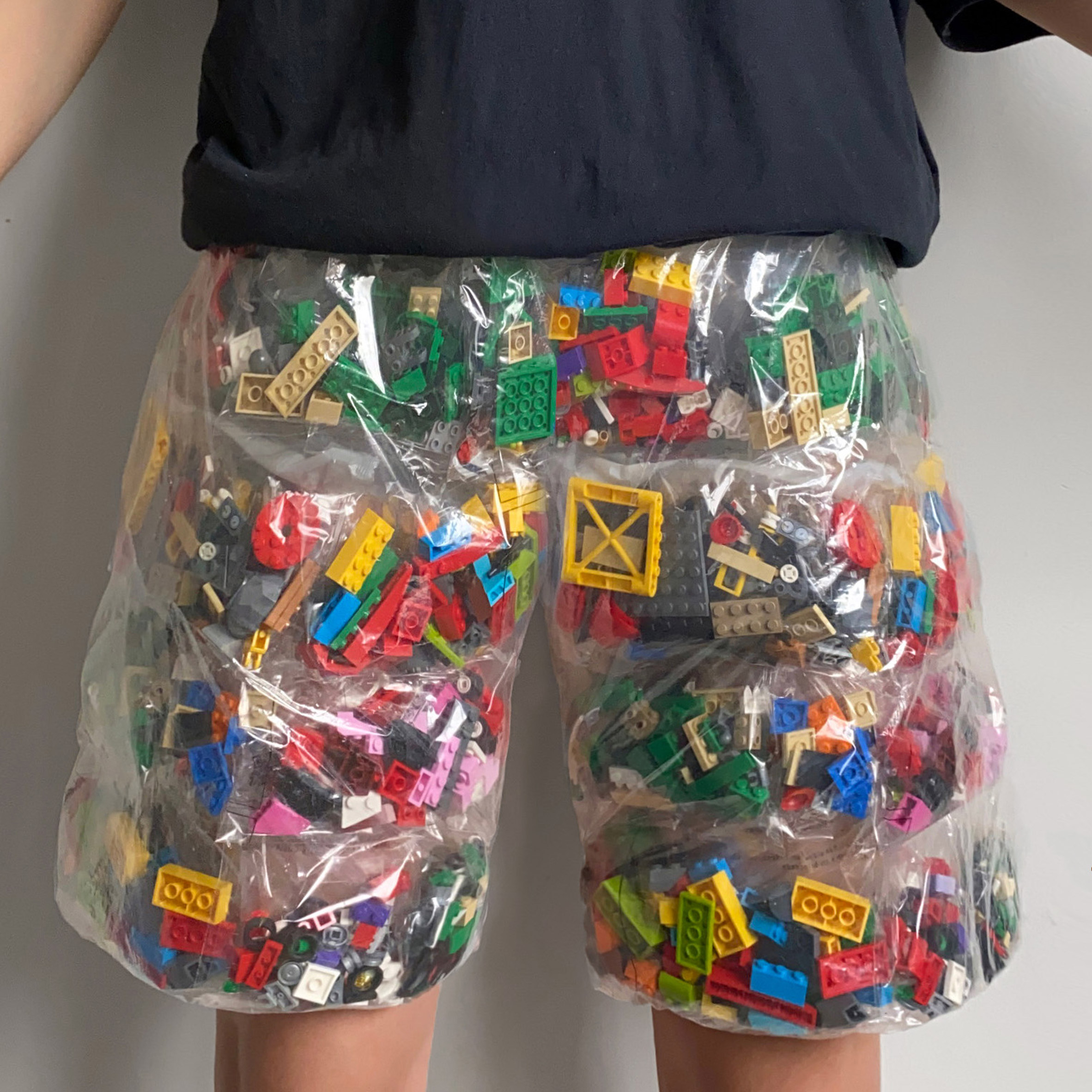 From a gumball-filled vest to pencil-case sandals with a functioning sharpener embedded into the sole – many of McLaughlin’s projects draw on nostalgia and childhood memories that have been updated into a contemporary context.

For her Lego Shorts the designer repurposed the Lego bricks she played with as a child to form the rainbow-coloured filling for a pair of shorts.

“My mom has kept a lot of the things that I really enjoyed when I was little, so every time I go home I’m inspired,” she said.

“I always end up doing a project while I’m there. I don’t really have all the equipment and sewing machines that I do in my studio so it’s really about working with what’s there. What are the basics that I can take and build a project off of?”

Tools of any kind, from kitchen equipment to gardening supplies, pose a particular fascination for McLaughlin, who transforms them into wearables that perform a highly specific function.

This hybrid peeler and high heel, for example, is just stable enough for walking and allows the user to complete the essential task of peeling vegetables while on the go.

“I have taken them apart since and used the same high heel to hold the end of a golf club,” she remembered.

“Then I added a stamp heel that you could walk on and it would stamp as you walked and later I substituted it for a lint roller so you can lint roll your pant leg while you’re wearing it.” 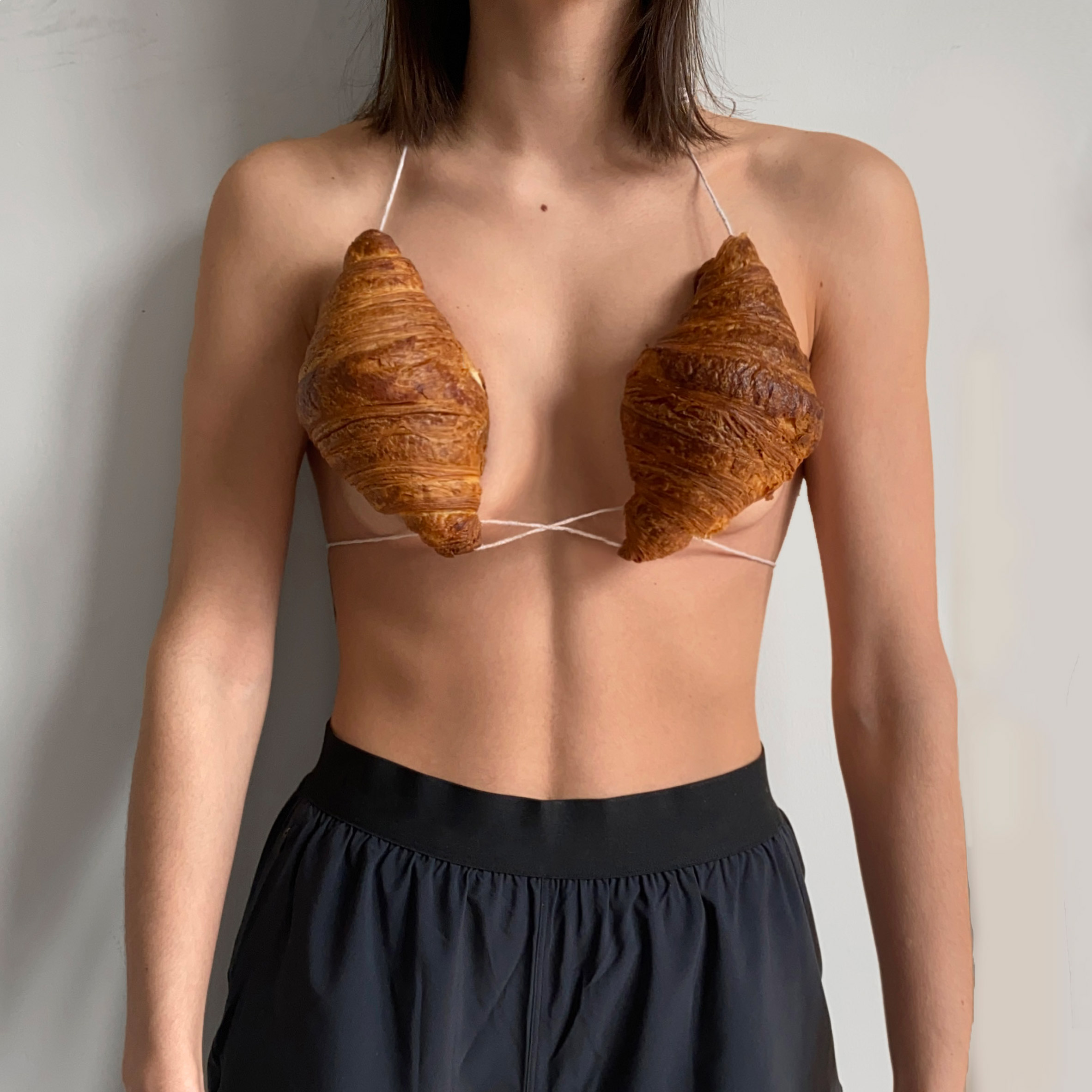 McLaughlin’s “waste not, want not” philosophy also extends to the food that she incorporates into her designs.

This particular brassiere was made during the height of lockdown from two croissants that she and her boyfriend subsequently ate for breakfast.

“I’ve never made anything with food that I didn’t eat afterwards and I would never want to be wasteful, so I also try to incorporate the packaging,” she said.

“In this case, I used the twine that held together the pastry box, taped it to a chopstick and fed it through the middle of the croissants. I had to be so delicate because I knew this was my one chance to get it right, since I only had two croissants.”

The post Six upcycling projects by Nicole McLaughlin that use ordinary objects in unexpected ways appeared first on Dezeen.