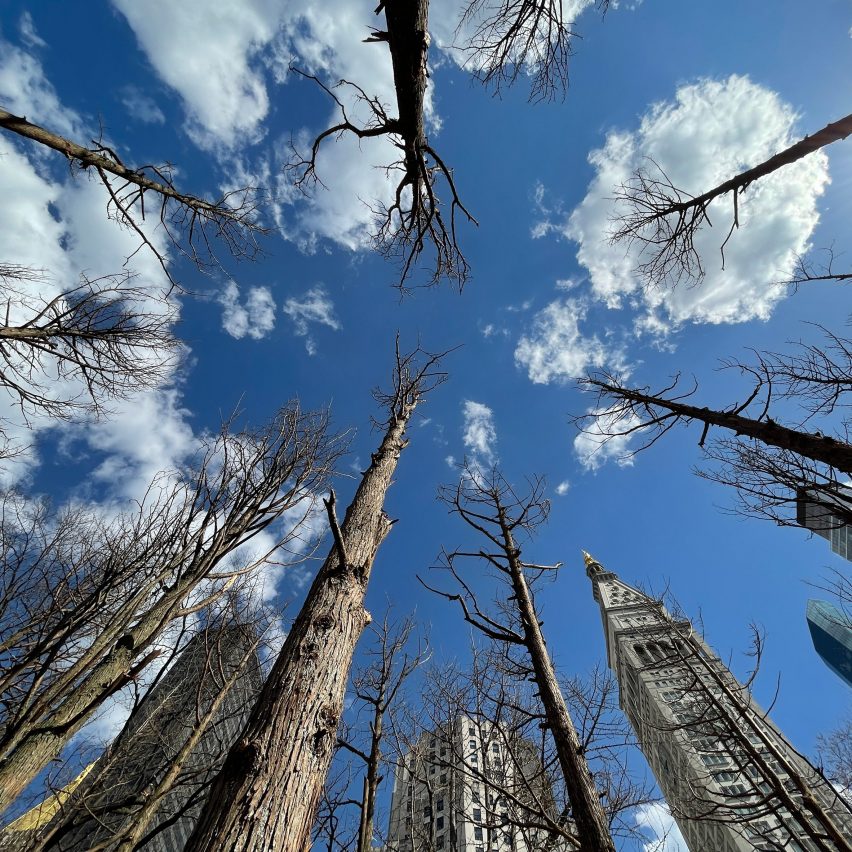 Called Ghost Forest, the project was commissioned by Madison Square Park Conservancy. The dead Atlantic white cedar trees have been erected on The Oval Lawn of the park.

Lin transported the ghostly trees from where they were felled in the New Jersey Pine Barrens to draw attention to deforestation caused by climate change.

“I wanted to bring a ghost forest to the heart of Manhattan, and find trees that were as close to Manhattan as I could possibly source,” explained Lin.

The 49 trees had been damaged by issues related to the climate crisis and were being cleared in a regeneration project.

The installation will run for six months, during which time the park will visibly change with the seasons, while the dead cedars will turn even more spectral as they decay.

Standing in stark contrast with the living trees in the park, Lin said she wanted Ghost Forest’s skeletal forms will invite passersby to confront the reality of the strain put on ecosystems by climate change.

“We have very little time left to change how we live within the natural world,” urged Lin.

“I wanted to bring awareness to a die-off that is happening all over the planet. But I also feel that a potential solution is through nature-based practices,” she said.

Lin and the Conservancy are also holding a programme of public events with a focus on nature-based solutions to climate change including lectures by leading specialists in the field.

A soundscape composed by Lin also accompanies Ghost Forest, which educates listeners on some of the native animals once common to Manhattan such as the grey fox and the American black bear.

“We are faced with an enormous ecological crisis, but I also feel that we have a chance to showcase what can be done to help protect species and significantly reduce climate change emissions by changing our relationship to the land itself,” concluded Lin.

Other recent projects which aim to raise awareness of the climate crisis include a variable font by Finnish newspaper Helsingin Sanomat that mirrors the declining amount of Arctic sea through disappearing letterforms and a flag designed by journalist Evan Townsend for Antarctica to encourage people to do more to protect it.

Photography is by Andy Romer unless otherwise stated. Preparatory sketches are courtesy of Maya Lin and Pace Gallery.

Ghost Forest is on show at Madison Square Park in New York until 14 November 2021. See Dezeen Events Guide for an up-to-date list of architecture and design events taking place around the world.