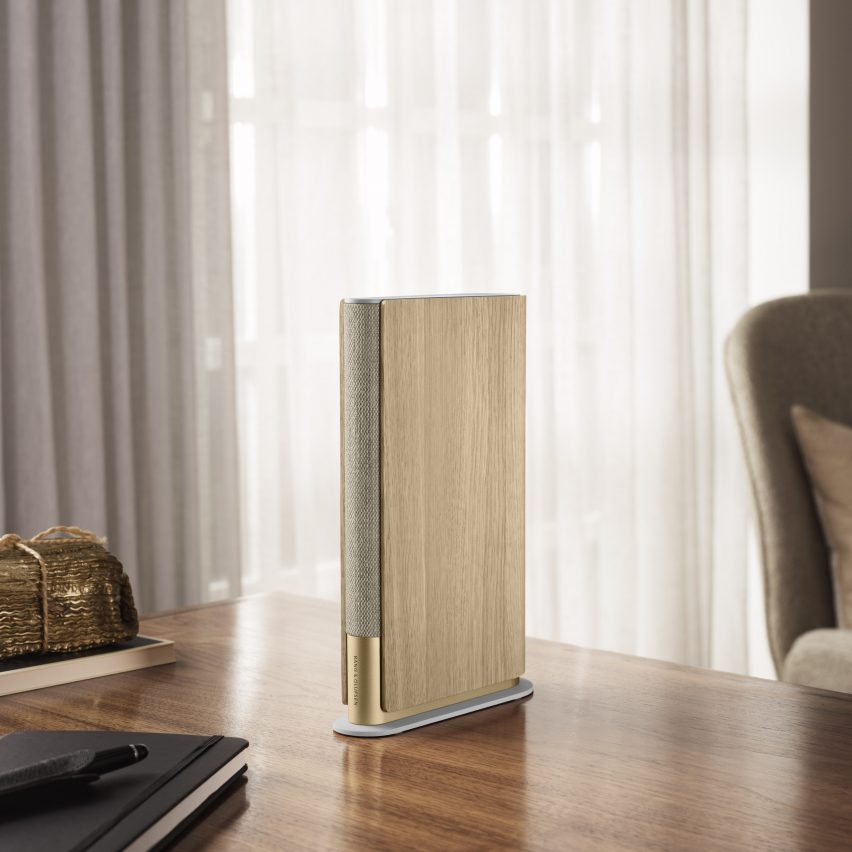 Benjamin Hubert‘s studio Layer has designed a new speaker for Bang & Olufsen to deliver high-performance audio in a small and subtle format.

The Beosound Emerge has a narrow wedge shape and warm materiality that is meant to make it look more like a domestic object than a piece of technology.

It is the second speaker Layer has designed for audio brand Bang & Olufsen after 2020’s Balance, and it continues that product’s use of timber, fabric and anodised aluminium.

There are also book-like touches — the thin oak panel wraps around the speaker like a book cover, while the placement of the Bang & Olufsen logo recalls an author’s name on the spine of a book.

Bang & Olufsen wanted to explore the potential of a super-slim design that would occupy a smaller footprint than its other speakers, so it could be placed on a bookshelf or other tight spot. The Beosund Emerge’s footprint is just 6.7 centimetres.

The company also wanted a subtle design that wouldn’t dominate in whatever room it’s placed.

“Traditionally Bang & Olufsen speakers are quite statement, and they’re quite often large,” Hubert told Dezeen. “Even the Balance speaker we did before, whilst not as statement at some of their old-school stuff, was still a little bit out there.”

“It’s nice to do something nuanced and subtle, in the context of Bang & Olufsen’s history of statements.”

While the Beosound Emerge aesthetic is meant to be quiet, its sound is not.

The speaker produces 180-degree sound, although only its top-end driver, a 0.6-inch tweeter, faces forwards, while the 1.45-inch mid-range driver is angled sideways. The four-inch woofers are omnidirectional, with low frequencies sent out through the base and bounced off the walls into the room.

Hubert added that it takes “a really clever array of heat sinks” to produce big sound through such a small device.

Another recent innovation for Bang & Olufsen, initiated with the previous Beosound Level, is replaceable parts that give the product a longer lifespan. If the connectivity and streaming technology in Emerge becomes outdated, the relevant module can be replaced.

The speaker can be controlled by voice via Google Assistant, or there are manual controls on the top of the device.

The Gold Tone version of the device features an oak cover with woven Kvadrat textile and pearl-blasted anodised aluminium. There is also a Black Anthracite model with a pearl-blasted aluminium grill and polymer side panels marked with a vertical corrugated pattern.

It continues a trend of the last few years for more warm and tactile tech products, of which Google has been a key proponent.