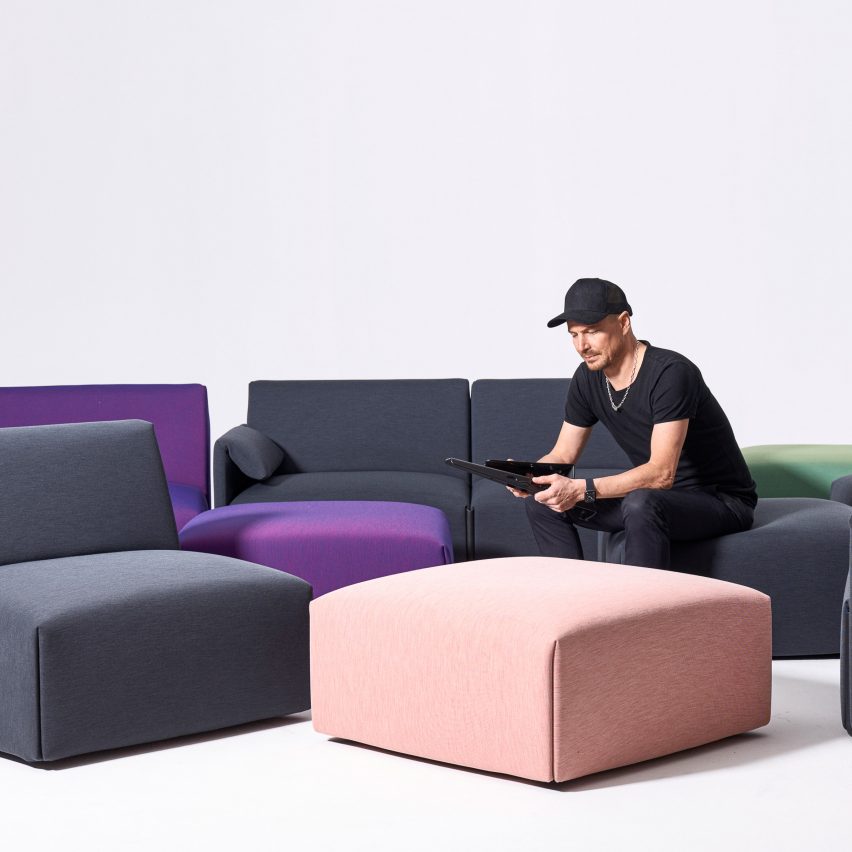 In this video produced by Dezeen for Magis, Stefan Diez explains how the new sofa system he designed for the Italian furniture brand is both user-friendly and part of a circular economy.

The Costume modular sofa, designed by Munich-based industrial designer Diez for Magis, is made of recycled plastic and designed to be easily assembled and dismantled by the user when needed.

The sofa’s modular construction was designed to make cleaning, repairing and replacing its components simpler than with traditional sofa systems.

“Magis approached me with a brief to re-think the traditional sofa system,” Diez explained in the video.

“They challenged me to come up with a sofa with an industrial soul, that was modular in nature, could be easily assembled and dismantled by the user and fit into the principles of the circular economy,” he added.

The system is broken down into four main components: a seat, a pair of armrests and an ottoman.

Other components include the cushioning element: a pocket spring and a thin layer of foam, which is held in place by a fabric cover. Offered in different colours and textures, the fabric cover is attached by hooking onto the base of the sofa and can therefore be easily removed and washed.

While conventional sofas are typically difficult or impossible to separate into their component parts, Costume’s construction does not involve its elements being permanently fused together.

Diez explained how the design of the sofa could extend its lifespan by allowing users to easily take it apart when cleaning or repairs are needed.

“The ease and modularity of the construction allows users to easily clean, repair or recycle individual parts of the sofa without having to buy a new one,” Diez said.

The sofa’s polyethylene core is made from recycled industrial waste that is itself recyclable, meaning it can be turned into similar products at the end of its lifetime.

The modules are joined together with plastic connectors, which come in colours that either match or contrast its fabric cover.

The modularity of the design gives the user “almost endless” ways to configure and assemble the design, and adds the ability to rearrange it to suit different types of spaces.

In the video, Diez explains how the collaboration with Magis has created a product that is sustainable in its approach and flexible in its use.

“We created a really comfortable, user-friendly and sustainable sofa system that can adapt to the fluctuations of life but also the needs of the future,” he said.

The designer spoke about the design of Costume and the collaboration with Magis in more detail during a live talk with Dezeen’s founder and editor-in-chief Marcus Fairs.

Diez founded his studio Diez Office in 2002 after studying industrial design at the State Academy of Fine Arts in Stuttgart.

His work focuses on furniture, lighting and other home objects that are typically made from recycled or natural resources. He has previously designed a collection of natural bamboo furniture that is held together by a piece of string.

Magis was founded in 1976 by Eugenio Perazza. Amongst the furniture producer’s other products is a rotation-moulded chair that resembles a spinning top by Thomas Heatherwick, a wavy plastic bench by Ron Arad and the often-copied Bombo stool by Stefano Giovannoni.

The brand has also collaborated with the likes of Konstantin Grcic, the Bouroullec brothers and Philippe Starck.

This talk was produced by Dezeen for Magis as part of a partnership. Find out more about Dezeen’s partnership content here.

The post Stefan Diez's Costume sofa for Magis is designed to "rethink the traditional sofa system" appeared first on Dezeen.