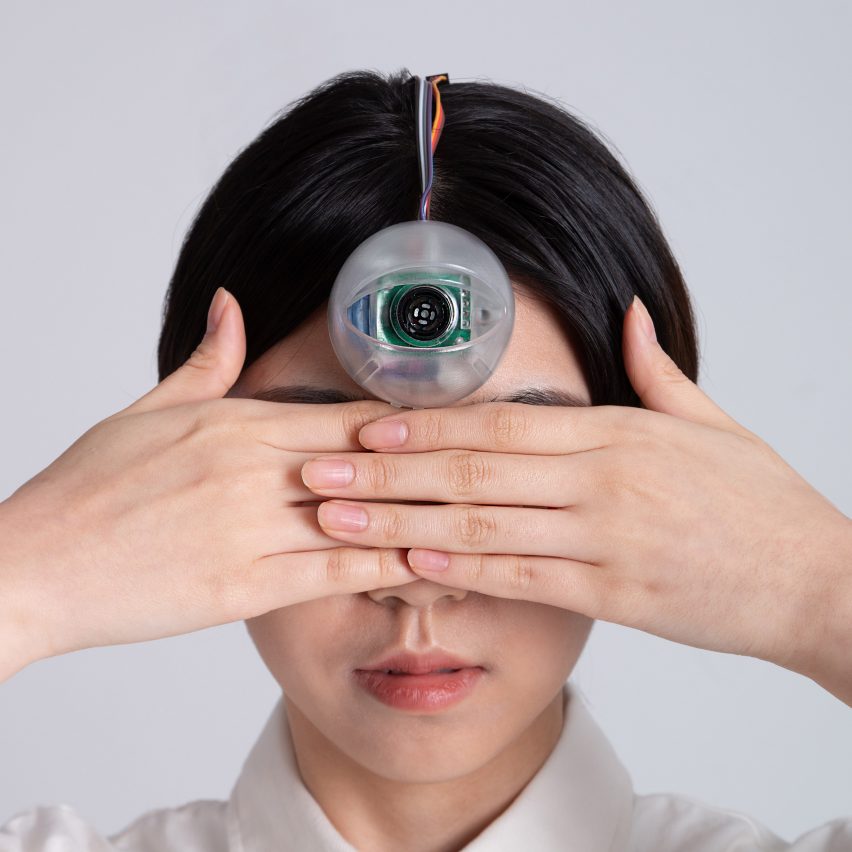 Industrial design student Minwook Paeng has created a robotic Third Eye that is fixed to the forehead and looks out for obstacles when the wearer’s real eyes are glued to their smartphone.

The prosthetic automatically opens its plastic eyelid when the head is tilted downwards and sounds a warning buzz if a hazard is detected up to a metre ahead.

This allows users to navigate their lives while texting or scrolling through Instagram, uninterrupted by real-world obstacles.

Developed by Paeng as part of his Innovation Design Engineering degree at London’s Royal College of Art and Imperial College, the project provides a satirical look at how humans are evolving into “phono sapiens”.

“By using smartphones in a bad posture, our neck vertebrae are leaning forward giving us ‘turtle neck syndrome’ and the pinkies we rest our phones on are bending along the way,” he told Dezeen.

“When a few generations go by, these small changes from smartphone usage will accumulate and create a completely different, new form of mankind.”

The Third Eye is the first in a series of products that imagine what the body of these phono sapiens might look like.

Constructed using open-source electronics platform Arduino, the device consists of a translucent plastic body that is fixed directly to the forehead using a thin gel pad.

This houses a speaker and a gyroscope – a sensor used in smartphones to detect the orientation of the phone and automatically rotate the screen.

In this case, the gyroscope detects when the user’s head is angled down and opens the plastic eyelid to reveal a sonar sensor.

“The black component that looks like a pupil is an ultrasonic sensor for sensing distance,” the designer explained.

“When an obstacle is in front of the user, the ultrasonic sensor detects this and informs the user via a connected buzzer.”

Rather than trying to deny or decry our unhealthy phone habits, Paeng’s project accepts them as an inevitable reality and ultimately hopes to expose the absurdity of prioritising screens over real-life interactions.

“The smartphone has permeated into modern life so deeply that it’s impossible to deny the evolution of phono sapiens,” he said.

“I hope that the act of ironically pointing out what we are doing with our smartphones can help people to take time for self-reflection.”

Other designers have instead moved towards creating calmer technology with pared-back interfaces to help users cultivate a more wholesome relationship to their devices.

London studio Special Projects has developed a Paper Phone that condenses important information such as contacts and maps onto a daily printout, as well as a paper sleeve called Envelope that allows smartphones to be sealed away for the day while allowing access to basic functionality.

Elsewhere, researchers from MIT Media Lab have wired plants to act as motion sensors and displays to offer an alternative to electronic screens.

The post Minwook Paeng develops robot eye to help users walk while looking at their phones appeared first on Dezeen.