Back our horse! Last chance to vote for Dezeen to win a Webby Award 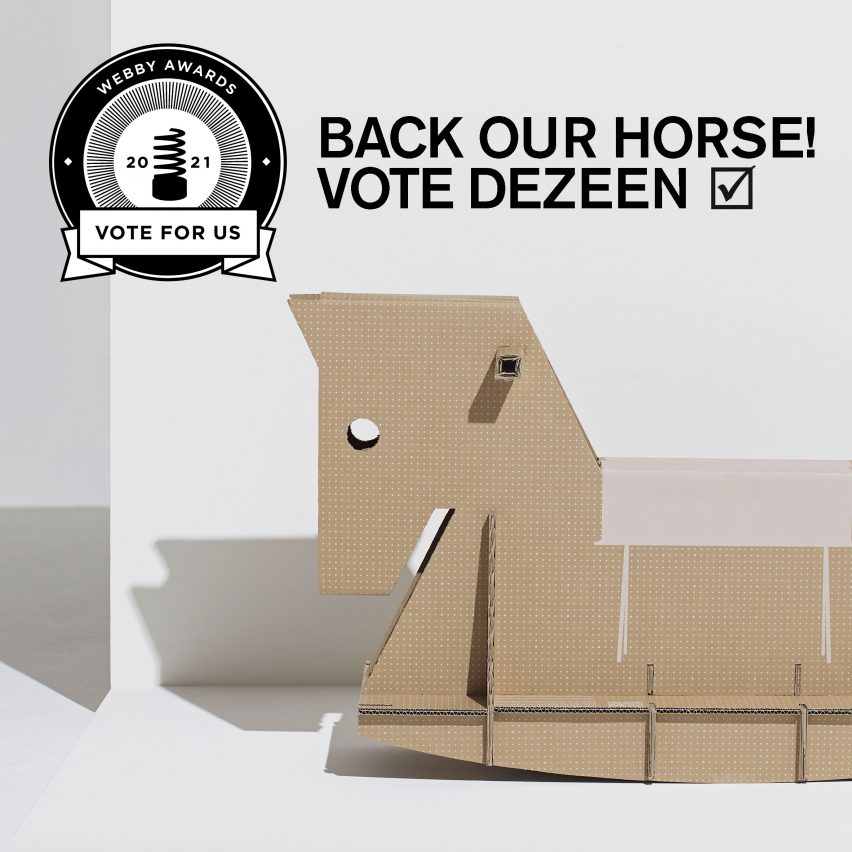 There are less than 24 hours left to vote for Dezeen’s Out of the Box collaboration with Samsung to win a Webby Award. Please vote for us before midnight tonight!

Dezeen is nominated in the branded content category for products and services at this year’s Webby Awards for our Dezeen x Samsung Out of the Box Competition.

We need our readers’ help to win the People’s Voice award, but there is not much time left to vote! Public voting will close at 11:59 pm (PT) tonight.

The Dezeen x Samsung Out of the Box Competition was a global contest that challenged contestants to design innovative new objects for the home that can be made by repurposing TV packaging.

The contest received over 1,500 entries from more than 80 different countries around the world.

It was won by recent Royal College of Art graduates Sarah Willemart and Matthieu Muller, who designed a series of animal companions for children, including a polar bear.

Last week we launched a campaign with the tagline “share the bear”, featuring an image of the winning design.

Now we’ve updated the campaign with an image of André Cardoso’s second-placed rocking horse design and are asking readers to “back our horse” in a final push to win the People’s Voice prize.

Once you have voted, you will need to confirm your email address in order for your vote to count.

The Dezeen x Samsung Out of the Box competition was a partnership between Dezeen and electronics brand Samsung.

The top photograph is by Benjamin Swanson with set design by Jam Studios and retouching by The Wizard Retouch.

The post Back our horse! Last chance to vote for Dezeen to win a Webby Award appeared first on Dezeen.