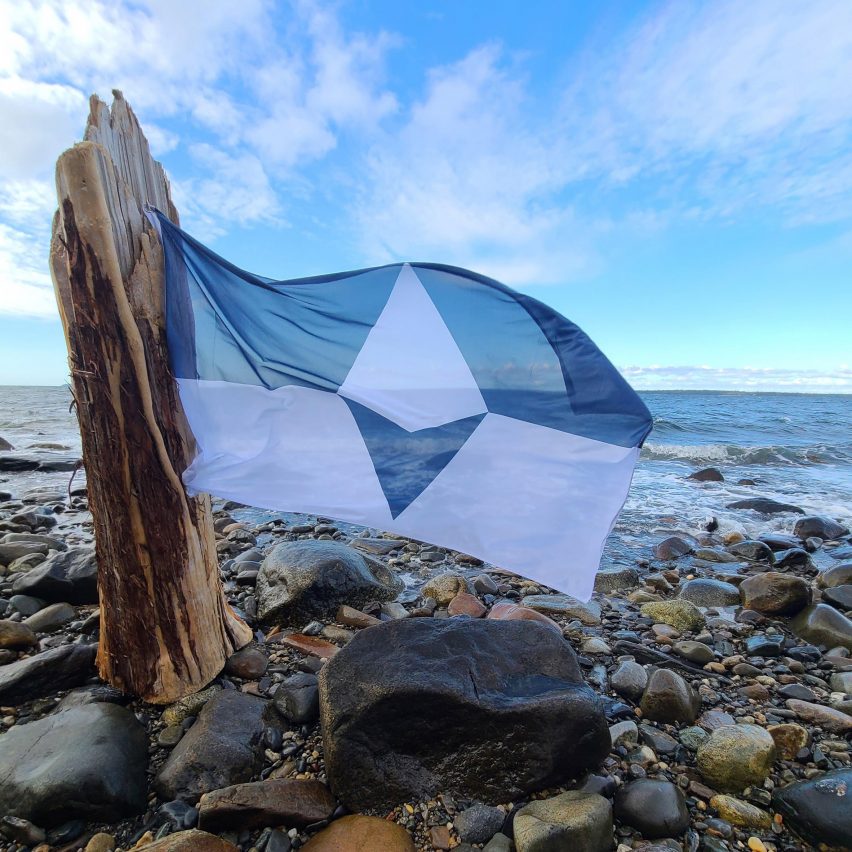 American journalist Evan Townsend has designed the True South flag for Antarctica to create a distinctive identity for the continent and encourage its protection by the rest of the Earth’s inhabitants.

Designed while working as a steward at a polar research station, the True South flag features an icy white peak mirrored by a south-facing compass arrow.

According to Townsend, it is the first Antarctic flag to be supported by any National Antarctic Program, with six backing it, and the first to be widely used across the continent.

The hope is that the flag will help to create a greater sense of community among the researchers and support workers who call the continent home for parts of the year while helping other people all over the world to feel a greater sense of duty towards this remote territory.

“Antarctica doesn’t have a permanent population, but it is one of the places that is most susceptible to the global climate crisis,” Townsend told Dezeen.

“Most people don’t have an opportunity to go there and there are no cultural ambassadors, no diplomats who are representing Antarctica. So I think a flag is a really important tool to be able to create a sense of connection between the general public and this continent that they have some responsibility for.”

Antarctica is one of the fastest-warming places on Earth. Average temperatures have risen by three degrees Celcius over the past 50 years compared to the global average of 0.9 degrees, causing the rate of ice loss to triple since 2012.

Up to 10,000 scientists and support staff work here in summer. But in winter, this number goes down to around 1,000 as temperatures drop to -60 degrees Celcius and transport in and out of the continent becomes virtually impossible.

Townsend, who has been doing seasonal work on the continent for half a decade and has no formal design training, crafted a first iteration of the True South flag from scrap tents and field bags in the winter of 2018.

His primary consideration was to create a neutral, non-political symbol that the continent’s diverse, part-time population could take ownership of.

“Antarctica is a very complex place, it’s governed by an international treaty system that has 53 countries who are party to it,” he said.

“So I knew that this flag had to be something that could have universal appeal, that wouldn’t be alienating to any particular group.”

The True South flag boils Antarctica down to its essential characteristics, with horizontal bands of white and dark blue nodding to the fact that so close to the South Pole, the sun never sets in summer and never rises in winter.

This also creates a strong contrast for maximum visibility during snowstorms and pitch-black polar night.

At the centre of the flag, the compass arrow points to Antarctica’s position on the globe while the triangular peak captures the most distinctive element of its geography.

“I’ve been a few places on the continent,” said Townsend. “But no matter where you go if there’s anything on your horizon, it’s going to be the peak of a snow-covered mountain or iceberg.”

Although 2:3 is the most common flag ratio, Townsend opted for the longer and less popular 3:5 format.

This positions the central emblem further away from the edges of the flag to prevent it from being worn away by the polar winds.

“Flags in Antarctica just get absolutely shredded,” Townsend explained. “It is the highest, driest, coldest and windiest continent on the planet.”

Since Antarctica was first discovered 200 years ago, a number of different flags have been flown on the continent.

Originally, these were largely national ones designed to stake a claim on the land. But since the idea of Antarctica as a single, protected entity was established with the Antarctic Treaty in 1961, a number of more other proposals have been put forward.

Both the emblem of the treaty, which is often mistakenly identified as Antarctica’s official flag, and a version designed by vexillologist Graham Bartram that serves as its official emoji, feature a simple outline of the continent on a blue backdrop.

But Townsend argues that none of these iterations is officially recognised or widely flown throughout the continent.

“I’ve never actually seen a flag of Antarctica in all my time down there,” he explained. “People weren’t really flying flags because they didn’t feel like the flags were theirs to fly.”

“It’s a symbol that should be chosen collectively, with input from the community and with the best intentions for Antarctica in mind. And True South is the first flag to be created, supported and adopted by members of the global Antarctic community.”

The post Antarctica's first flag aims to give the uninhabited continent a voice in the climate crisis appeared first on Dezeen.