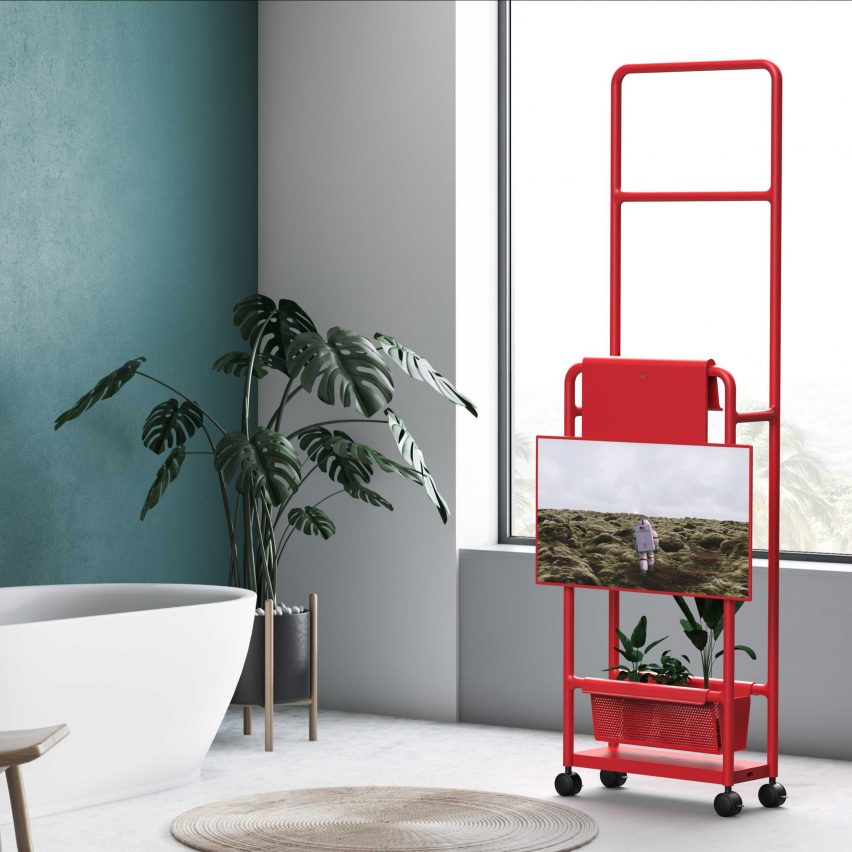 A lamp that unfolds into a screen, a TV that becomes a shelf and an OLED display that can be easily wheeled from room to room are among the finalists in Dezeen and LG Display’s OLEDs Go! competition.

The five finalists were selected by the competition jury out of a shortlist of 20 designs, which were published on Dezeen last month. The shortlist was selected from over 200 entries from more than 50 countries around the world.

“We received a lot of ideas and all of them were very fresh,” said LG Display. “We’ve once again felt the infinite possibilities of OLED display technology.”

“The designs were rated by 22 different professionals based on their innovation, aesthetics, functionality and feasibility. Congratulations to the top five design teams that have achieved the highest scores in each field.”

The competition sought designs that make creative new use of OLED display technology. Entrants had to embrace the technology’s key qualities, such as its lightness and thinness, its flexibility and its transparency.

“TVs and digital displays are central to many people’s lives and living spaces and these designs show that this doesn’t have to be a bad thing,” said Dezeen editor and jury member Tom Ravenscroft.

“The designs show that OLED technology allows us to go beyond what we currently think of as a standard screen. Hopefully, we will be seeing some of these concepts appear in people’s homes in the near future!”

Among the top five designs is one that responds to the change in lifestyles brought on by the pandemic.

Lee and Kim imagine users wheeling it from one room in their house to another and shifting the screen’s position to facilitate better experiences of activities such as video conferencing and streamed workouts.

“The era of the ‘multipurpose home’ has come, but home appliances and products that already exist in the house are not supportive of this change,” said the designers.

“Trolley is a versatile movable OLED screen that accepts these demands. It’s a product that you can use in places where you need screens all over the house, away from the existing fixed TV.”

One of the other top five designs makes use of the possibility for OLED screens to be transparent when they’re not in use. Scroll, by Japan-based Richard Bone and Jisu Yun, is a slim screen that curves into a shelf at the bottom — a simple shape inspired by an unravelled scroll.

Designed to be hung or leaned against the wall, Scroll has a shelf made of softly coloured anodised metal. The screen is transparent when not in use.

“When Scroll is turned off, the transparent OLED blends into the background, leaving only the personalised display shelf,” said the designers.

Another design to embed an OLED within an item of furniture is Console by Italian designer Gianfranco Vasselli.

It is a high shelf designed to sit over the head of the bed, with a screen underneath providing an interactive canopy.

“One can use the Console for lighting purposes while interacting on social networks or surfing the web, to watch streaming on-demand audio or video services, or as a multimedia clock with integrated analysis of the sleeping phases,” said Vasselli.

“To preserve the characteristics of a piece of furniture, which integrates with the bedroom area of the house, Console has been produced in solid wood,” he added.

The remaining two of the top five designs make use of the flexibility of OLED technology, featuring screens that either roll or fold up into more compact forms.

South Korea-based designer Doyeon Shin’s Flag.R has a screen that rolls up into a sculptural object that can be used as a speaker.

It can also be used in “line view”, with the screen one-fifth exposed to display information such as track listing and lyrics.

“Changing space other than fixed home appliances is difficult to match the natural and free mood of the M-Z generation,” said Shin.

“Flag.R adds the spatial flexibility and flag shape of the rollable display, enabling it to create the interior layout of your choice like a Tetris game.”

Meanwhile, Canada’s Jean-Michel Rochette’s Signal design folds in the centre like a book cover to conceal the screen when it’s not in use.

Fabric covered, the object has a soft domestic presence and works as a speaker or ambient light while closed.

“Nowadays, a TV is often the centre of attention in a room where it is displayed,” said Rochette. “What if we can remove a little bit of that attention and bring an element of decoration and surprise when it is not in use?”

The five finalists were selected by the jury ahead of 15 other shortlisted designs, which included OLED cribs, bags and tables.

The overall winner of the contest will be announced in May.