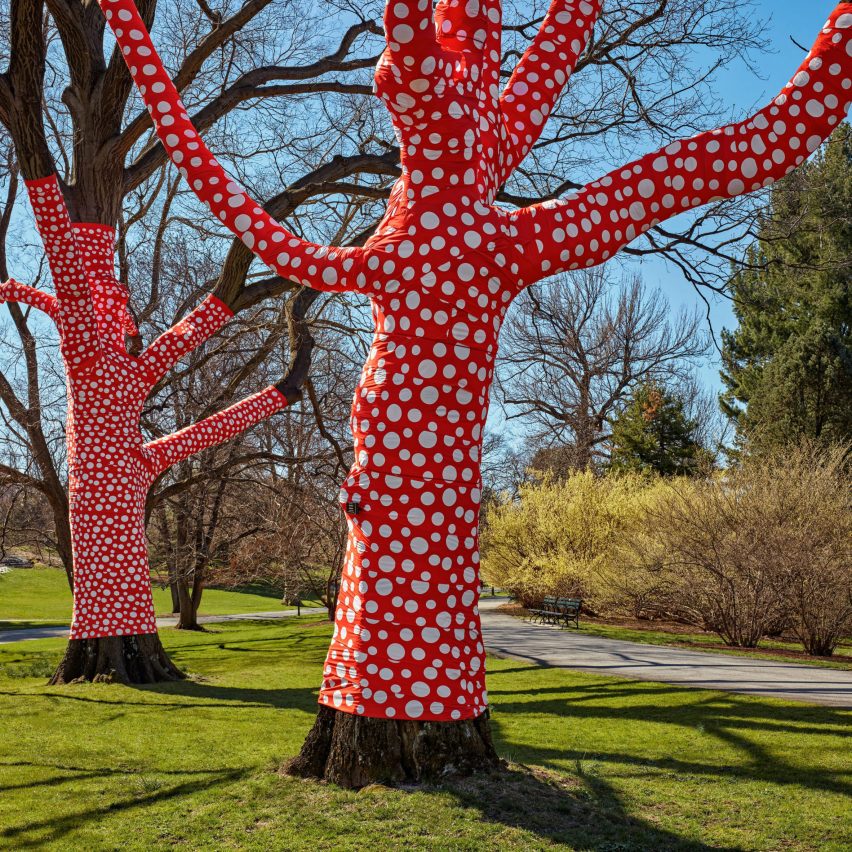 Japanese artist Yayoi Kusama has poured over a thousand mirrored balls into a pond and covered the trees of the New York Botanical Garden in polka dots as part of a park-wide exhibition.

The site-specific installations were created as part of the 2021 exhibition Kusama: Cosmic Nature, which has been creatively installed around the gardens in New York.

The show, which was postponed from last year due to the coronavirus pandemic, is open to visitors until 10 October.

The piece is called Ascension of Polka Dots on the Trees.

Other installations by the artist in the gardens include a lake filled with 1,400 mirrored steel balls for Narcissus Garden, an ongoing installation based on a piece of performance art Kusama first performed in 1966.

Dancing Pumpkin, a new piece from the artist, is a five-metre-tall bronze sculpture of an amorphous gourd-style figure on eight painted polka dot legs.

The 92-year-old old artist has also created a star-shaped aluminium sculpture named I Want to Fly to the Universe, which has been installed over a reflective pond.

Installations were also placed inside the buildings of the New York Botanical Garden.

My Soul Blooms Forever is a crop of colourful and cartoon-like metal flowers that sprout from a circular water feature under the glass dome of the Enid A Haupt Conservatory – a greenhouse built in 1902 that’s full of palm trees and orchids.

Amongst the columns of the Mertz Library building, which dates from 1898, a cluster of tentacle-like polka dot fronds forms Kusama’s 2015 piece simply titled Life.

Along with pumpkins and polka dots, Kusama is famous for her interactive optical illusion spaces that use mirrors and lights to create neverending immersive experiences.

She created Infinity Mirrored Room – Illusion Inside the Heart for the botanical gardens, with coloured glass that will filter the light as it changes throughout the seasons.

Due to coronavirus restrictions, the piece won’t open until the summer and will be limited with timed tickets.

In 2017 an exhibition of Kasuma’s infinity mirrors at The Broad in Los Angeles had to enforce a 30-second “selfie rule” after snap-happy visitors caused queues.

Kusama: Cosmic Nature is on from 10 April to 31 October 2021 at New York Botanical Gardens. See Dezeen Events Guide for an up-to-date list of architecture and design events taking place around the world.