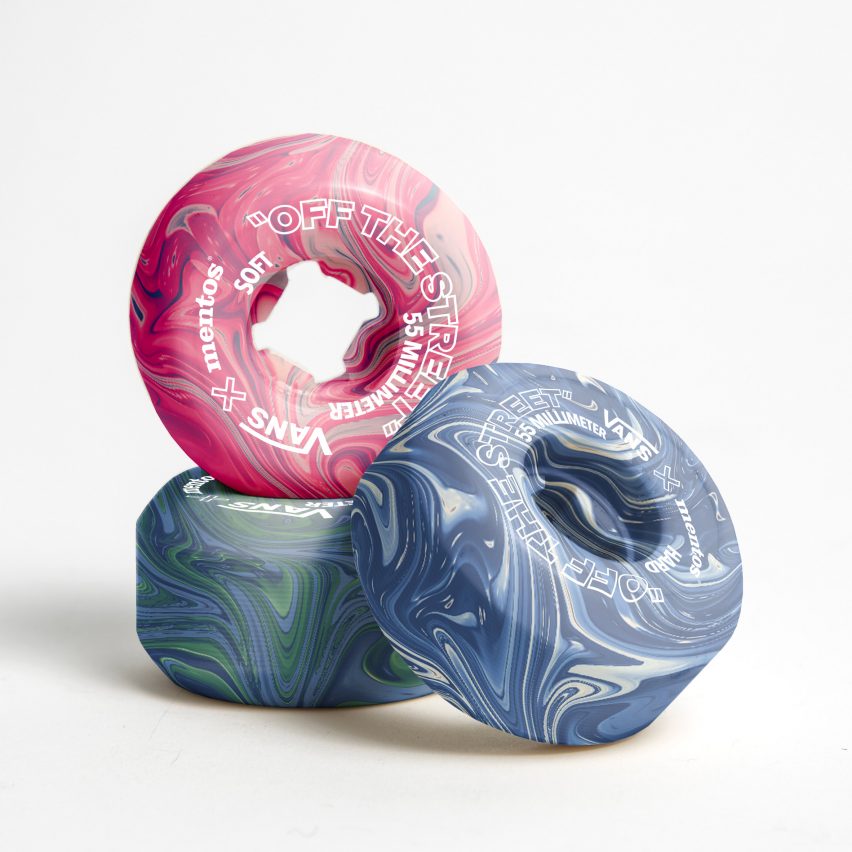 The students installed special collection boards in urban areas of Nantes, France, where passersby could stick their used gum rather than dropping it on the floor.

The gum was then collected every week before the gum was ground together with the collection board itself, which is made from polymethyl methacrylate (PMMA) plastic.

The PMMA helps to stabilise the chewing gum as it is melted together and machined into wheels.

“During our test phases we needed between 10 and 30 chewing gums per wheel, depending on the size of the gum and the desired hardness of the wheel,” Maupetit told Dezeen.

Chewing gum, which has existed since antiquity, was originally made from the sap of different trees. But most modern gum consists of a synthetic rubber called polyisobutylene that is also used to create car tyres.

It is estimated that as little as 10 per cent of this gum is disposed of correctly, which means that in the UK alone, local councils have to spend £60 million a year cleaning up the other 90 per cent.

Rather than having this plastic go to waste, Maupetit and Fischer hoped to give it a second life as skateboard wheels, with a trial project in the city of Nantes, where the two are studying at the L’École de design Nantes Atlantique.

“We collected more than 60 chewing gums with one board,” said Maupetit.

“So it is possible to collect several thousand pieces of chewing gum each month but as we didn’t get permission from the city of Nantes to install our collection boards on a massive scale, we couldn’t test this.”

The gum is mixed with a binder and natural dyes before being injection-moulded to create the final skateboard wheel, which comes in four sizes and three different hardness levels.

Once it is worn out, the chewing gum wheel can once again be ground up and melted to create a new wheel, forming a closed-loop system.

Although currently only tested on a small scale, the students imagine that the system would work best as a collaboration between major brands such as skatewear label Vans and Mentos parent company Perfetti Van Melle, which is one of the world’s largest manufacturers of confectionery and chewing gum.

“It’s extremely important for brands to get involved in this kind of issue, simply because multinationals are the biggest producers of industrial waste,” Maupetit explained.

“By recycling this waste, it becomes a virtuous circle, with the company losing less material and making money from what was originally waste.”

More and more designers are looking to give commonly littered plastic items a new lease on life, from Haneul Kim creating stackable stools from discarded coronavirus masks to Sachi Tungare collecting five kilograms of cigarette butts by hand to create a range of multi-coloured bowls and vases.