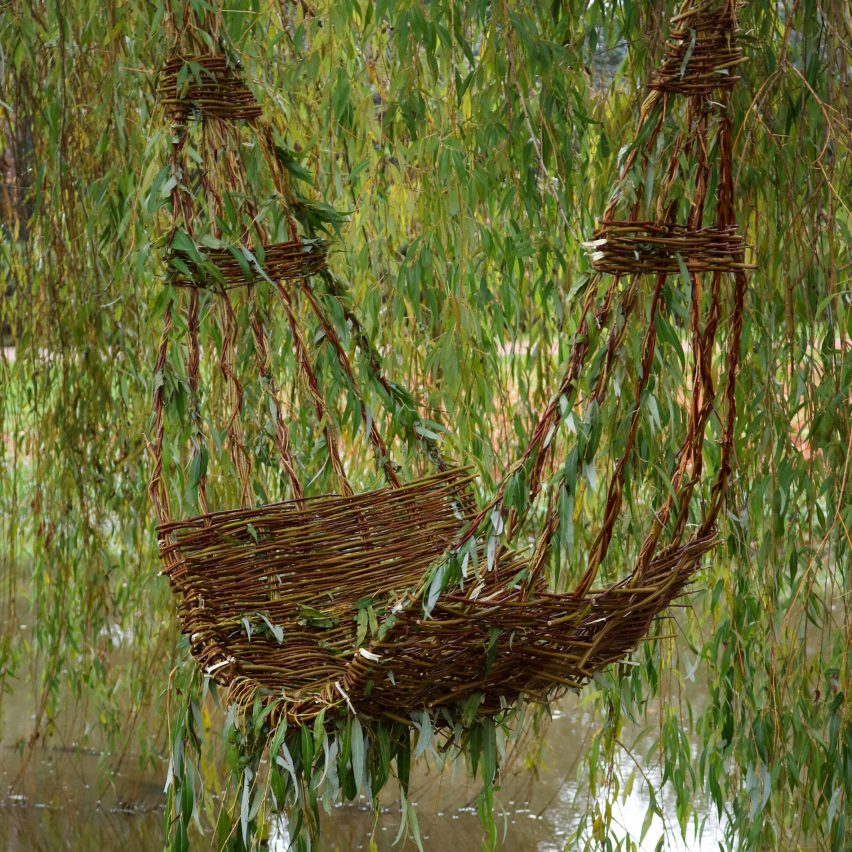 Designer Gerardo Osio has woven the living branches of a weeping willow tree together to form a “living seat” along the Dommel river in Eindhoven, the Netherlands.

Osio developed the project, called Weeping Seat, as a student on the GEO-Design Master’s course at Design Academy Eindhoven.

Weeping Seat explores ideas of how design can be improved and used in order to form a closer and more responsible relationship with nature.

Osio embarked on the project under the guidance of design duo Formafantasma and Lenneke Langenhuijsen, co-founder of Dutch studio Buro Belén.

“In the first trimester of the programme, we were asked to select a tree species native to the Netherlands,” Osio told Dezeen.

“We were asked to research it from different perspectives such as biology, ecology, culture, politics, economy and materiality, and any other aspect which is important to your chosen tree.”

The weeping willow tree, or Salix babylonica, is a species of willow tree that is commonly found across Asia and Europe.

Weeping Seat is a swing-like seat formed from the living branches of a white weeping willow tree, as well as harvested Belgium red willow twigs, which are commonly used in basket-making.

“By mixing both, the seat lets the living branches keep growing new leaves and develop more tissue while having enough strength to support a person,” Osio told Dezeen.

Camouflaged in the willow from which it is formed, the hanging seat offers a place to sit and be immersed in the landscape.

Osio chose the willow for his project due to its locality in Eindhoven. Willow trees grow along the Dommel river, which connects the city by parks and plays a key role in its ecosystem.

“The willow tree is a species that grows in the northern hemisphere, linking it to specific cultures who have developed material and cultural practices to the tree.”

“You also experience a certain feeling of ease and tranquillity just by contemplating the tree, which is how the project started.”

Osio’s design process was a combination of theoretical study, fieldwork and exploring practical weaving. In particular, he described these physical processes as “very important in order to better understand the willows and their context”.

“Instinctively, I started spending time with and around the trees, walking along the Dommel, talking to the people who interacted with them, and also climbing the trees and noticing as many details about them as I could,” continued Osio.

The designer was informed through his research around tree-human collaboration, such as living root bridges created by the Khasi tribe in Meghalaya, India.

Osio also cited a study by Thomas Vallas and Luc Courard, which investigates the theory of living architecture, as having influenced his project.

A local basket weaver named Mieke Langenhuizen, who specialises in working with willow twigs, assisted Osio with learning the basics of willow weaving, and also offered guidance about the tree.

While Weeping Seat is intrinsically tied to its location on the Dommel River, the designer recognised how employing basket making techniques to weave trees together is a method that could be replicated.

“What could happen with Weeping Seat is that the branches feel the stress of the weight and the tree may produce more tissues to make it stronger,” he said.

“There is the possibility of applying the same principle to different tree species and different materials.”

Gerardo Osio is a Mexican designer whose work often focuses on research and design through the exploration of biomaterials. He has also created a set of ambiguous objects to interrogate the history of northeast Mexico and a portable kit of Japanese lifestyle items.

Photography is by Felix Bell unless otherwise stated.