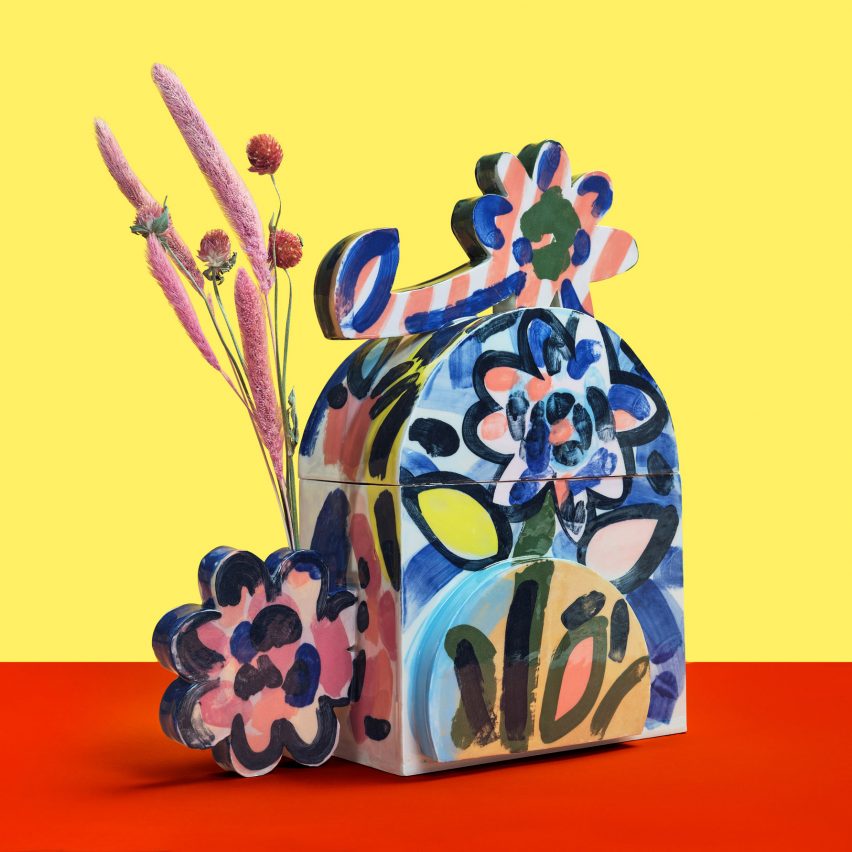 The London-based artist added three-dimensional flower decorations to the square and rounded ceramic urns and covered the white stoneware with his signature vibrant designs painted with wide brushstrokes.

“I wanted the shapes of the urns to feel monumental and bold,” Booth told Dezeen.

The handmade urns, which were made to hold ashes after cremations, were designed for “death specialist” Farewill, which handles funerals, wills and probates.

They can be a place to keep ashes before scattering them, or be kept on display in the home in memory of someone who has passed away.

Booth used the same materials to create the vessels as he usually uses for his work so that the designs were in line with his other pieces.

“The urns are slab-built from white stoneware and decorated with slip colours that I have stained myself, and then clear glazed and high fired,” Booth said.

“I made a point of not changing or adjusting any of the colours or materials I use regularly as I wanted the urns to be a continuation of my work and not to be thought of as an anomaly, despite the fact that they definitely sit within a different context than my usual work.”

It was the first time Booth worked with lidded objects, and funeral urns have to be made in certain sizes, which also affected the design.

“The shapes were initially dictated by the volume needed for the urn, which I found out is typically 3.5 litres, then after that was considered it was about figuring out shapes which allowed for the best surface to decorate and to add the extra slab-built shapes,” Booth said.

To decorate the urns, Booth chose to add flowers, a recurring motif for him. These were painted on the urns and also function as decorative handles on some of the lids and sides.

“Flowers are a motif I use frequently in my work and they seemed extra appropriate for this project given the connotation between flowers and funerals, mourning and celebration,” Booth said.

As well as being decorative, the protruding flower designs also have a practical purpose.

“Building this into the design allows the owner of the urn to display dried flowers in the urn in the designated holes made for the flowers,” the designer explained.

Decorative urns can be passed down in families through generations, and Booth wanted his to be a way to help people express “who they are and who they were”.

“I obviously really love the idea of the urns being kept for a long time and being handed down,” he said.

He plans to continue to experiment with the objects, which he hopes can bring people “a sense of joy, celebration and a positive sense of their loved one inhabiting the urn.”

Only five urns were made and people can apply for one on the Farewill website where they will be given away.

Other unusual urns include Maria Tyakina’s futuristic domed urns and an urn that can be used as a fruit bowl before you die.

Photography is by Robert Stanley.