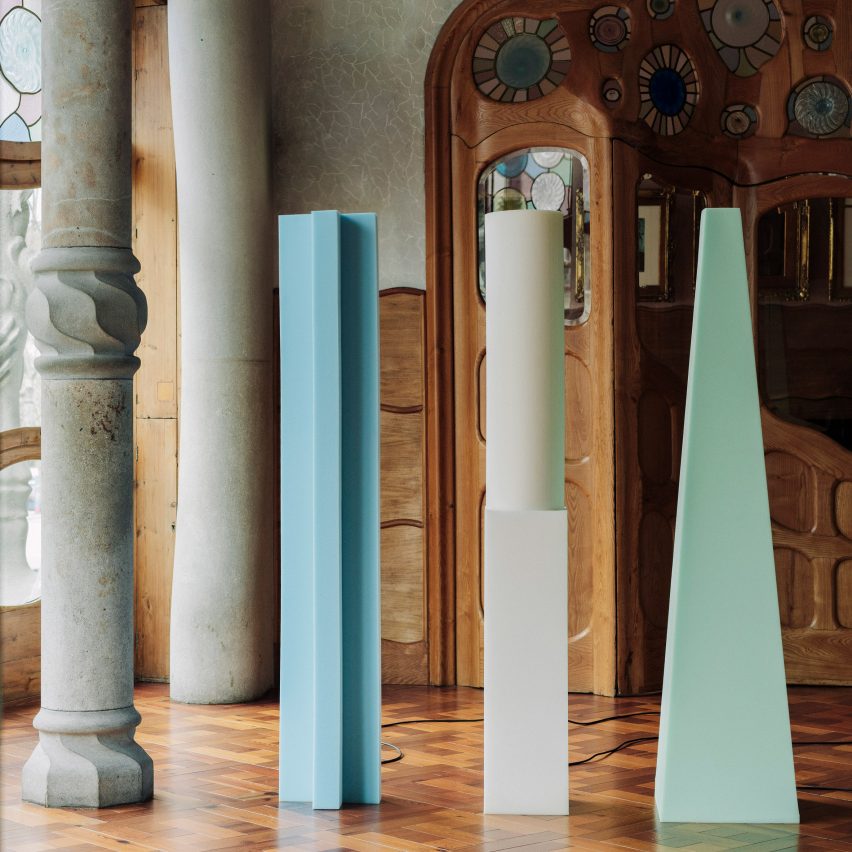 Pastel-coloured upholstery foam is cut into geometric totems to form a series of floor lights, created by Barcelona designer Max Enrich to contrast with the organic architecture of Antoni Gaudi.

Simply called Totem, the collection encompassing five lamps was commissioned as a homage to Gaudi’s Casa Batlló as the building remains closed to the public due to the coronavirus pandemic.

“I was invited to create a project for these weird times, as the house is shut down,” Enrich told Dezeen.

“I was considering a few ideas until I got there. The place is magnificent and its details and forms are imposing so I was considering projects that blend in with this space,” he continued.

“But I realised I was doing it wrong. It wasn’t about competing with the house but rather about creating an opposite: non-integration.”

Today a UNESCO World Heritage site, Casa Batlló is a multi-story apartment building in the heart of Barcelona that was remodelled by Gaudi – one of Spain’s most famous architects who designed the Sagrada Família church – in 1906.

Its name, meaning house of bones, nods to the almost skeletal structure of the building’s slender columns and sinuously sculpted stonework, with few straight lines found in the entire structure.

Enrich designed the lamps to contrast this space.

“The most noticeable aspect of the house are the organic shapes of the walls and ceilings,” Enrich explained.

“Every detail is amazing. Even the door pulls and handles were designed specifically for the project and the walls are hand-painted. So I found the foam, as plain as it is, the most contrarian material to what the house is.”

To create the lights, foam was manually cut and glued together, creating stacks of simple, geometric forms, from cubes to cylinders and pyramids.

Colours range from butter yellow to baby pink and blue and were deliberately chosen for their “artificiality”.

LEDs were integrated into the top of each design, projecting light upwards while the electrical wiring is embedded into the heart of the structure.

No stranger to playing with contrasts, Enrich has previously created a trio of steel nesting tables with bulky legs and slender surfaces.

Photography is by Claudia García-Mauriño.