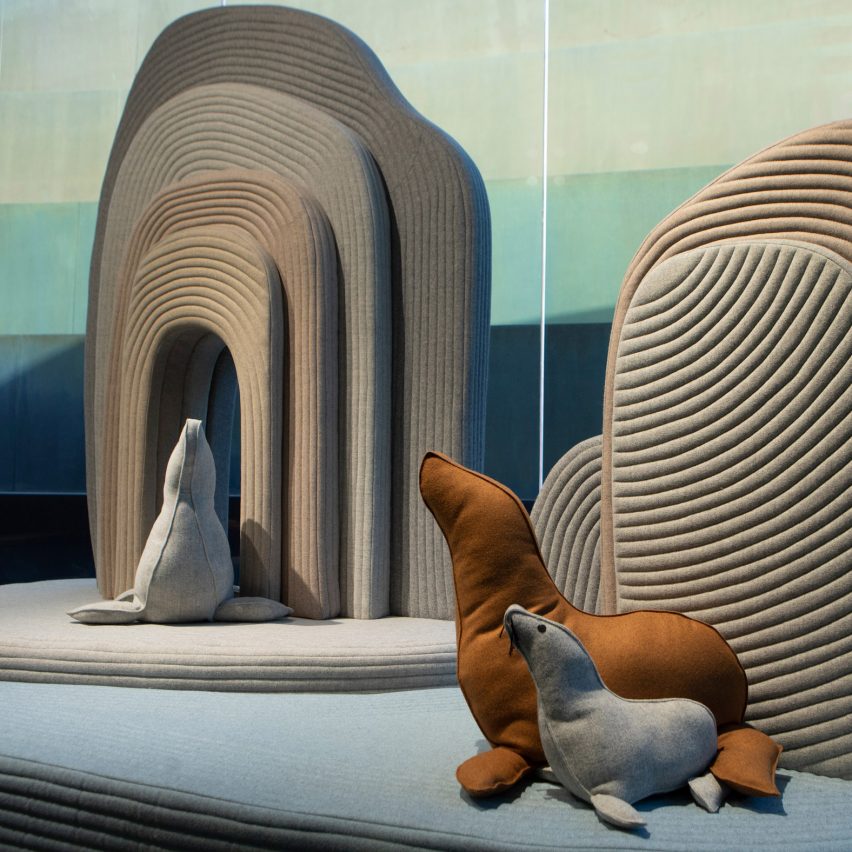 Designer Sarit Shani Hay has created Soft Landscape, a sculptural installation of cushioned animals in coastal landscapes for the Design Museum Holon that draws on the architecture of the museum itself.

Tel Aviv-based Hay, who specialises in child-centric design, was commissioned to create the artwork for the Black Box exhibition, which displays pieces from the museum’s own collections.

The site-specific Soft Landscape installation features an imaginary landscape with cushioned volumes to represent rocky coastlines, as well as the animals that live among them – seals, bears and sea lions.

“I was interested in creating an imaginary playful natural landscape scene inhabited by soft cushioned animals that examines concepts such as home, refuge, climate and animals during the pandemic,” Hay told Dezeen.

“As a child-centric designer, specialised in creating objects and environments for children, I have become keenly interested in recent years in the therapeutic effects of time spent in nature has upon us, particularly on children, a feeling that has enhanced due to our life under the pandemic,” she added.

The design of the landscapes, with their undulating shapes and striated patterns, was meant to evoke the architecture of the Design Museum Holon itself, which was designed by Ron Arad.

“I was interested in bringing the outside into the inside,” Hay explained.

“The sculptural installation, with the blue and taupe tones, communicate the bold curves of the museum building itself that showcases a dramatic exterior in red and orange stripes, while its underside, as seen from a glass wall in the room of my installation, is painted in cooler shades,” she added.

The arched forms of the building were here used to depict secluded bays and steep cliffs.

Hay also spent hours inside the museum to absorb its atmosphere and how the light changed throughout the day, which informed the colours she chose for the sculptures.

“I have used different colours and tones of blue and taupe that reference both an imaginary coastline and the colour tones of the museum building,” she said.

The sculptures are made from wood structures that have been filled with foam and covered in New Zealand wool fabrics from British brand Camira Fabrics.

Hay made them using a special craft technique with dense stitches that follow and emphasise their curved shapes.

She had originally planned for the pieces to be played and lounged upon, but this is currently not possible due to coronavirus regulations.

As well as being an opportunity to create new work, the exhibition also let Hay focus more on ideas that she had explored in an earlier installation, Island, in the Tel Aviv Crafts and Design Biennale 2020.

“I have strived to create an escape from daily life, a meditative feeling with therapeutic quality, through the use of simple organic rock-like shapes upholstered in pure wool fabrics which invite the viewer to pause, sit and relax,” Hay said of Soft Landscape.

The designer’s previous work includes the interiors and wooden built-in furniture for a Tel Aviv elementary school and colourful designs for a school for children of refugees.

Photography is by Roni Cnaani.

Black Box is on from 25 February to 05 June 2021 at Design Musuem Holon. See Dezeen Events Guide for an up-to-date list of architecture and design events taking place around the world.

NFTs will usher in a “creative and artistic renaissance” say designers