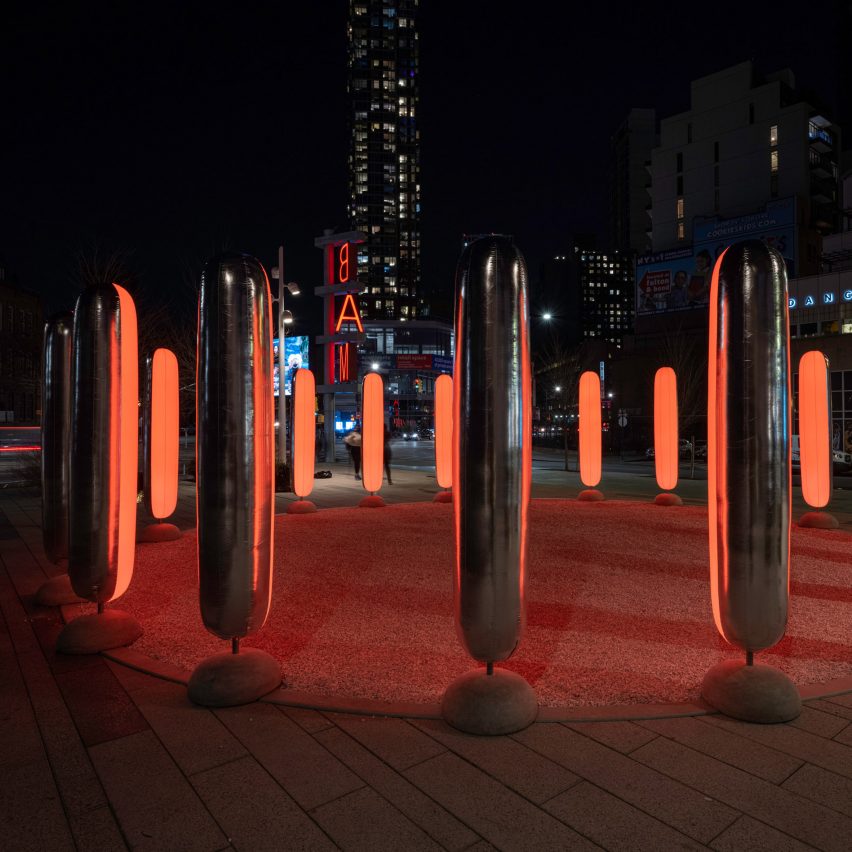 Breathing Pavilion by artist Ekene Ijeoma is a temporary installation in Brooklyn made of illuminated inflatable pillars that invite people to breathe along with its pulsing lights.

Breathing Pavilion encompasses a 30-foot (nine-metre) circle of 20 nine-foot (three-metre) inflatable pillars held up by concrete bases, positioned around a raised bed of marble chips on a square in Brooklyn’s Cultural District in New York.

Ijeoma created the meditative public artwork as a response to years of political turmoil, the coronavirus pandemic and systematic racism.

“The only thing that was certain was that we’d still be fighting for Black lives,” said Ijeoma.

“The concept is something that I just thought of for this project,” the artist told Dezeen. “But I’ve been developing some other ideas around creating spaces and also public spaces for relieving stress.”

The installation is positioned on a corner where many protesters gathered to march in support of the Black Lives Matter movement during the summer of 2020.

Since the death of Eric Garner, who was suffocated in a chokehold by New York City Police in 2014, “I can’t breathe” has been a rallying cry of the Black Lives Matter movement.

The pillars are two-tone, with reflective silver on the outside and translucent white insides fitted with LED lights.

Ijeoma chose the orange glow of the lights to echo “the colour of the sun” and used his own breathing to determine the speed at which the pillars’ lights gradually pulsate.

In this way, Breathing Pavilion encourages passersby to stop and breathe along with the lights.

“The interesting thing for me is the combination of the materials,” said Ijeoma. “It wasn’t the most technologically advanced workout for me. That’s what I like about it, it’s really simple.”

From afar, the inflatable pillars look solid, despite their soft and wrinkly appearance close-up. Ijeoma described this disparity as intentional.

“I wanted them to look like solid objects. I think it plays with reality, and how surreal these times are,” he said.

“There’s a questioning of what is true and what is real, and I think that’s the transition you need to sort of shift your mind to be in a space like that, to really try and just meditate and reflect on those things,” the artist continued.

The pillars are positioned three-feet (one-metre) apart, the typical width of an American doorway. Ijeoma explained that this was done in order to create symbolic doorways that double as safety measures.

“Everything was done with proportions of three because I wanted to use social distancing cues,” said Ijeoma.

According to Ijeoma, the performances are intended as specific moments when “the rhythm and vibrations of the installation are enhanced” in an inflatable space that is defined by air, and built mainly for quietness.

“I wanted them all to be solo performances,” he said. “Unlike other musicians, jazz musicians normally play in an ensemble. In this case, they’re all solo, and it’s all improvisation, so it’s really interesting.”

Ijeoma works across an art studio and a lab at the Massachusetts Institute of Technology in order to creatively develop new ways to understand social issues.

He has previously designed The Ethnic filter, a website that blurs webcam portraits depending on the comparative visibilities of different ethnic groups in the design industry.

Other recent projects which confront systematic racism include an augmented reality app for children by London non-profit BLAM through which users can see virtual plaques and sculptures memorialising black history, and a current exhibition at MoMA in New York which explores how racial injustice has influenced America’s built environment.

Photography is by Kris Graves.

Commissioned by Downtown Brooklyn Partnership and Van Alen Institute, Breathing Pavilion will be on show at The Plaza at 300 Ashland in Brooklyn’s Cultural District from 16 March to 11 May. See Dezeen Events Guide for an up-to-date list of architecture and design events taking place around the world.