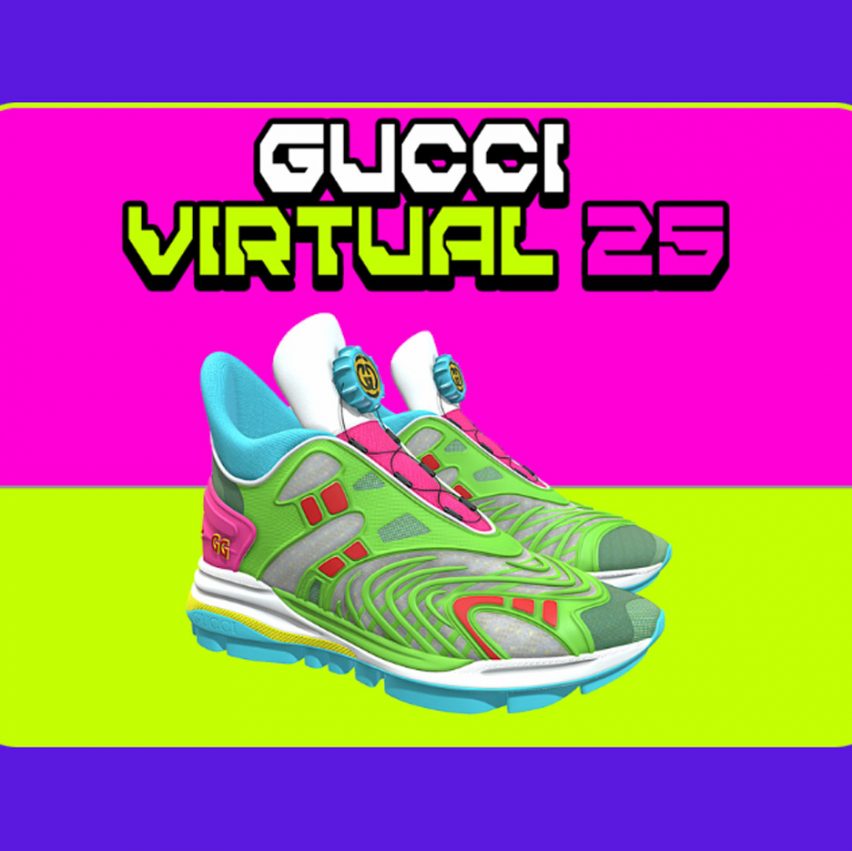 Gucci creative director Alessandro Michele has designed a pair of neon-coloured, digital-only trainers that people can try on using augmented reality and “wear” in photographs for social media.

The Gucci Virtual 25, named after Michele’s favourite number, is a low-top, high-top hybrid with a fluorescent, highlighter green upper.

The brand’s double G logo is emblazoned both on the chunky blue sole and on a dial, which holds the shoes together in place of traditional laces.

Created in collaboration with AR fashion platform Wanna, the non-physical shoes can be purchased within either company’s mobile app for between $9 and $12.

This enables the owner to wear the shoes much like a face filter so they can take pictures or videos to be shared online. Buying them within the Gucci app also unlocks an in-game downloadable version of the trainers that can be worn by users’ avatars on the virtual reality social platform VRChat and online game Roblox.

Gucci has previously worked with Wanna to create AR versions of its entire real-life sneaker collection so that shoppers can virtually try it on within the brand’s app.

“Our goal as a company is to actually supersede the product photos… and substitute it for something which is way more engaging and closer to offline shopping.”

Since last autumn, Gucci has also realised a number of its existing designs as virtual wearables for video game avatars, from creating a series of accessories for The Sims 4 to releasing its collaboration with The North Face on Pokémon Go.

However, Virtual 25 marks the first time that the luxury Italian fashion house has designed a trainer that exists only in the virtual world.

Among the other brands making their first foray into digital-only fashion is Buffalo London, which recently released a flaming, virtual version of its platform trainers that were first popularised by the Spice Girls in the 1990s.

Unlike digital artworks that are linked to non-fungible tokens (NFTs) – a blockchain-based certificate of ownership – these virtual items don’t really belong to the buyer as they cannot be re-sold.

Rather, users simply buy the right to wear the shoes, much like buying music on iTunes only gives the user permission to listen to a song.

The post Gucci releases first virtual sneaker that can only be worn in digital environments appeared first on Dezeen.