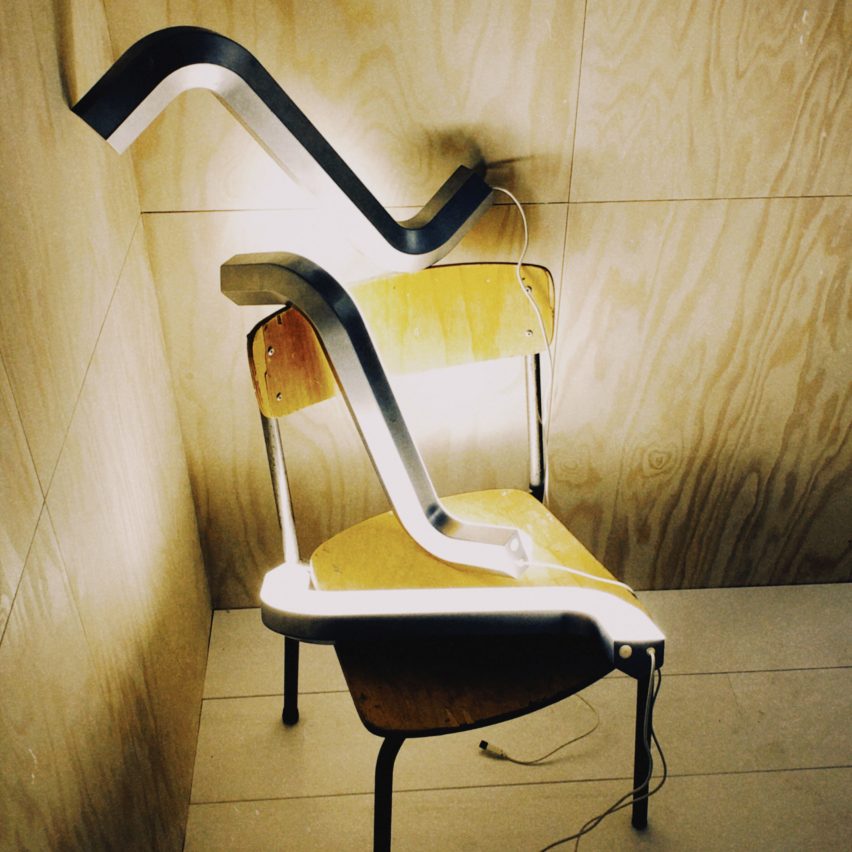 Japanese design studio Gelchop has created a lamp for IKEA that takes the shape of an oversized Allen key in a nod to the company’s flat-pack furniture legacy.

The lamp forms part of a 10-piece homeware collection created by IKEA in collaboration with five different artist and designers including Sabine Marcelis and Snarkitecture co-founder Daniel Arsham.

From a clock that questions the relativity of time to drones displayed like butterflies, it features pieces that blur the line between art and functional design

“The traditional idea of art being high-end and design being part of mass culture simply is not relevant anymore,” said Henrik Most, creative leader at IKEA. “The two go fantastic together – that is where the magic happens.”

As a studio that often recontextualises everyday objects, Gelchop chose to focus on the humble Allen key and borrowed its distinctive, angular shape to form a desk light.

The aim was to help “arguably the most iconic IKEA item of all” have its time in the spotlight.

“The Allen key symbolises the essence of IKEA but it’s rarely at the centre of attention,” said Gelchop co-founder Ryota Morikawa.

“As a tool that is used to assemble furniture, the Allen wrench has a small, insignificant existence. But I have changed it into a larger item that is different from its everyday size.”

Supersizing the design emphasises its graphic lines while LEDs hidden behind a diffuser on the underside emit a soft, indirect light. Its frame, made from anodized aluminium, can be propped against a wall, lain on its side or moved around depending on the needs of the user.

Gelchop also created a matching LED torch in the same shape, rendered in a shiny blue or silver chrome.

“We wanted to create something that is fun to use even for those who don’t normally find assembling furniture much fun,” Morikawa added.

Among the other pieces in the collection is a classic, circular wall clock that has been reimagined by Arsham to look as if it was flying through space enshrouded in a white sheet.

Rendered in plastic, its folds and ripples are frozen in time as if the clock was captured mid-movement.

“It taps into the idea that time doesn’t stand still. If there’s one thing in life that you cannot stop, it’s time,” IKEA’s Most told Dezeen.

Marcelis contributed a metal wall light with a long gash across its shade, informed by the famous slashed canvases of Argentine-Italian artist Lucio Fontana.

When not in use, the sconce acts almost like a sculpture. But when illuminated, light is allowed to spill out from the edges and tinge the room in one of five carefully fine-tuned colours, ranging from a warm, muted yellow to neon pink.

“For Sabine, who works so specifically with colours, it was super important that we actually find the exact tonality and light output she was looking for,” Most explained.

“Those are really specific colours that she has designed. We even sent samples back and forth because colours are so subjective.”

The collection also includes a series of artworks by Stockholm studio Humans since 1982, which showcase miniature drone models in a display case as if they were butterflies, as well as a throw and vase emblazoned with graphic slogans by German artist Stefan Marx.

Available from April 2021, the limited-edition range was created as part of IKEA’s sixth annual Art Event, which sees the company collaborate with high-profile artists in a bid to democratise access to their work.

The increasing convergence of different creative disciplines has given birth to a plethora of weird and wonderful collaborations in recent years, from the Bygglek storage boxes created by IKEA and Lego to Arsham designing a pair of trainers for Adidas.

The post IKEA unveils Allen key lamp in homage to "the most iconic IKEA item of all" appeared first on Dezeen.