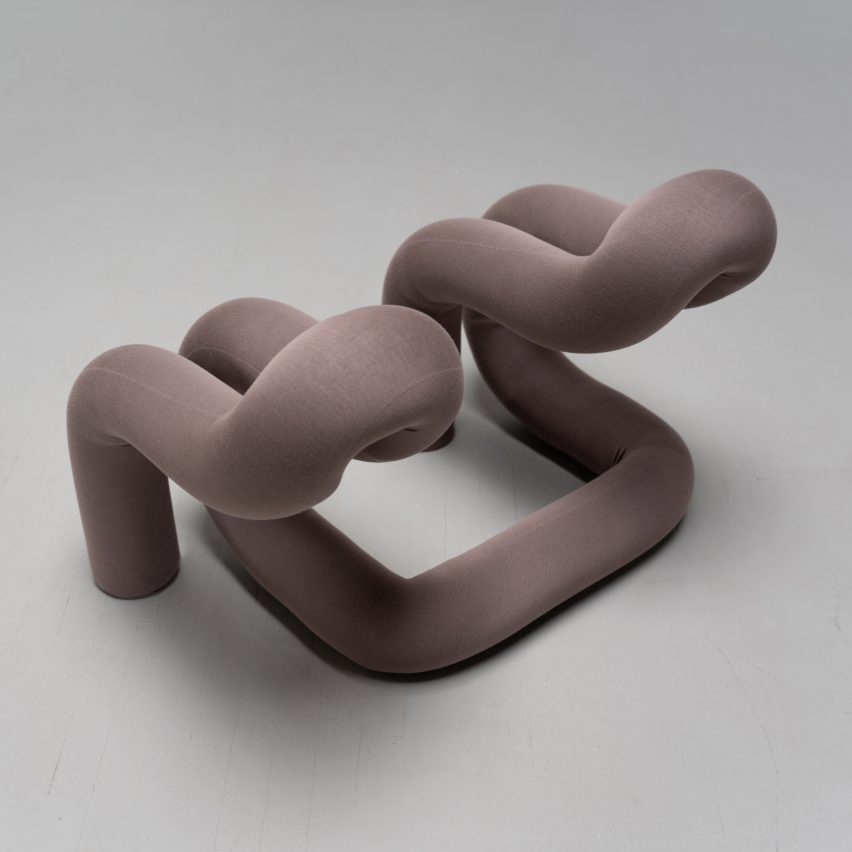 Ulu Group is a collection of sculptural furniture by Armenian-American designer Ara Thorose made of cylinders with the circumference of a human thigh.

Thorose measured his own legs to produce the designs, which are made of steel and foam and upholstered in wool and silk.

The collection, which includes three chairs and a table, is the result of Thorose exploring the concept of a circle trapped inside a square.

“A circle is limitless, whereas a square is limited, so it’s inherently problematic,” the designer told Dezeen “Each form is a circle traversing the cube-like spaces held by furniture,” he added.

“I used my thigh as the basis for the cylinders’ circumference, humanising the abstract nature of the work.”

A third chair, named Ulu Duo, is a two-seated, mauve-coloured version of Ulu Chair. Ulu Table is a dark brown side-table with a glass top.

Each piece of furniture is made of a curved steel frame that wrestles between a circular and a square shape.

“Ulu Group gets its name from the U-turns and L-turns that compose the line paths of each form,” said Thorose.

Thorose wrapped polyurethane foam around the steel frames to flesh out the cylindrical shapes.

Ulu Group is covered in a wool and silk-blend fabric designed especially for the collection. Thorose chose to add silk due to its subtle sheen which accentuates the furniture’s contours in certain lighting.

Thorose describes his design process as “game-based.” Beginning with hand-built models, the designer refines the geometries of these small-scale maquettes by sketching their profiles.

These sketches then become full-scale pieces of furniture.

Ara Thorose is a Brooklyn-based designer. Ulu Group expands on Thorose’s previous Soft Cylinders collection, a set of furniture that explores the power of cylindrical forms.

Thorose is not the first designer to use their body to draw their chair’s dimensions.

Lithuanian designer Marija Puipaitė used the outline of her legs to design a trio of chairs called Embracing Touch, while British designer Laila Laurel created a pair of chairs shaped to encourage the sitter to spread their legs or keep them apart.

Photography is by Se Yoon Park.

The post Ara Thorose's cylindrical furniture is based on the width of his thigh appeared first on Dezeen.

Living together, high and low