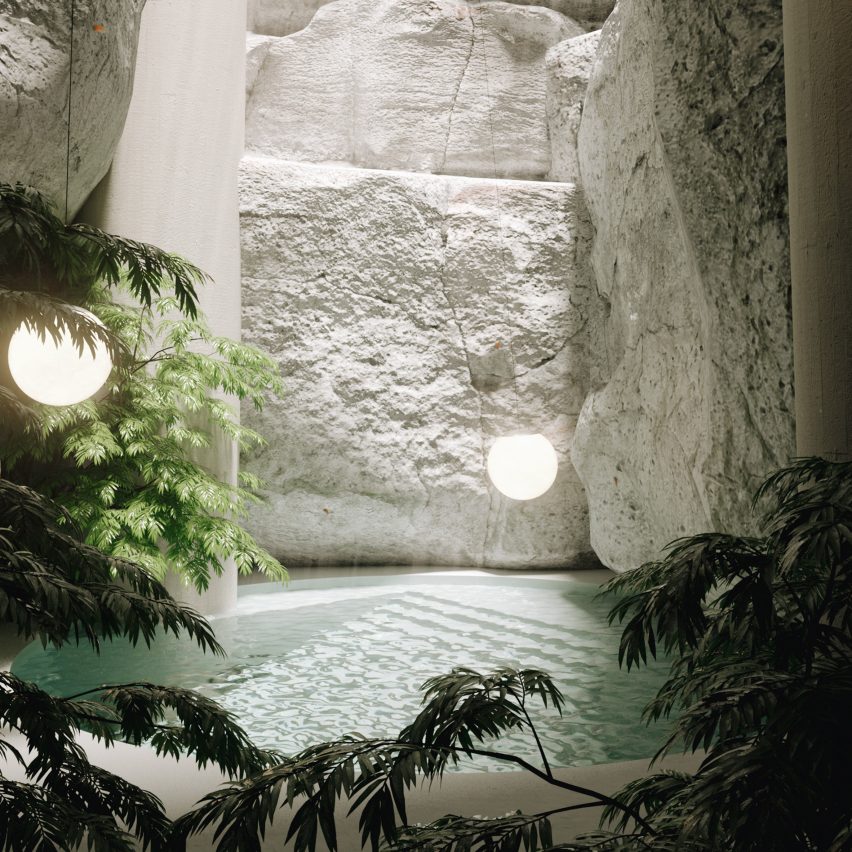 Alexis Christodoulou has become the latest 3D artist with a cult social media following to sell his renderings online as part of an NFT auction.

Under the title Homesick, the sale encompassed nine looped, animated videos of different dreamscapes that merge the built and natural environment.

Each was linked to a non-fungible token (NFT) to verify its authenticity using blockchain technology.

The collection sold for a combined total of nearly $340,000 via crypto art marketplace Nifty Gateway, with the most expensive virtual artwork fetching $17,000.

The news comes shortly after fellow Instagram-famous rendering artist Andrés Reisinger put ten pieces of virtual furniture under the hammer as NFTs last month. Together, they sold for almost $70,000.

NFTs effectively act as authenticity certificates that are linked to virtual artworks and recorded on a blockchain, much like a cryptocurrency transaction, to confirm their origin and ownership.

The technology is making it possible for renderings like Christodoulou‘s, as well as art or fashion that only exists in the digital world to be collected and traded, sparking a flurry of high-profile auctions.

Last week, Christie’s became the first major auction house to sell a purely digital NFT artwork – a jpeg collage by American artist Beeple that went for $69 million and became the most expensive digital image ever.

Elsewhere, a single gif of the early internet Nyan Cat meme recently sold for nearly $600,000 while musician Grimes auctioned off $6 million worth of NFTs via Nifty Gateway, the same platform used by the two 3D artists.

“This space is super new and it’s gone absolutely bananas in the last week,” Christodoulou told Dezeen. “I think there is a notion of absolute disruption in it that makes people want a piece of it.”

Traditionally, 3D artists like him have had to rely on commissions from brands in order to monetise their work, as for example with the virtual backdrops he created for Bower Studios to show off the company’s Melt Mirror collection.

But now, crypto art has opened up an unprecedented way for digital designers to sell their work directly. NFTs can even be programmed with an automatic royalty system, allowing creators to receive a portion of the profits whenever their work is sold on to someone else.

“I think it’s such a great opportunity to do something without a client that can potentially pay for itself,” Christodoulou explained.

“Some people are making millions but for me, I see it as an opportunity to do some much-needed R&D between all the commercial briefs and work we are doing in the studio.”

His debut NFT sale included three one-off pieces while the remaining artworks were sold as limited editions of either five or 150 pieces. Coming in at a fixed, entry-level price of $500 each, the limited editions of 150 brought in the most money – a combined total of $225,000.True to its title, the collection explores the concept of home and the desire to frolic in the great outdoors while being stuck inside.

“My wife and I recently moved from Cape Town to Amsterdam while the world started to lockdown again. We both feel quite homesick but mostly we are really just sick of being at home,” the artist explained.

Among the one-of-a-kind pieces is one called Deadlines, which shows a remote working set-up complete with desk, chair and laptop transplanted onto an ice floe and offset against rolling, pastel-coloured clouds.

Others feature a couch sunken into a black, volcanic mesa, a pool between towering rockfaces or an impossibly pink wetland with a tub at its centre.

Some digital artworks including Reisinger’s furniture can be integrated into open-world games such as Minecraft while virtual fashion like Buffalo London’s flaming platform trainers can be “worn” by the buyer in pictures and shared on social media.

But Christodoulou’s renders do not lend themselves to this same level of interactivity.

“I suspect some will be traded, some will be kept and some will be lost along with some bitcoin wallet passwords,” he predicted. “I hope to be able to create some more immersive spaces in VR and such to be minted in future and hopefully the owners will be able to integrate those directly into applications.”

Ten of the latest lighting designs on Dezeen Showroom