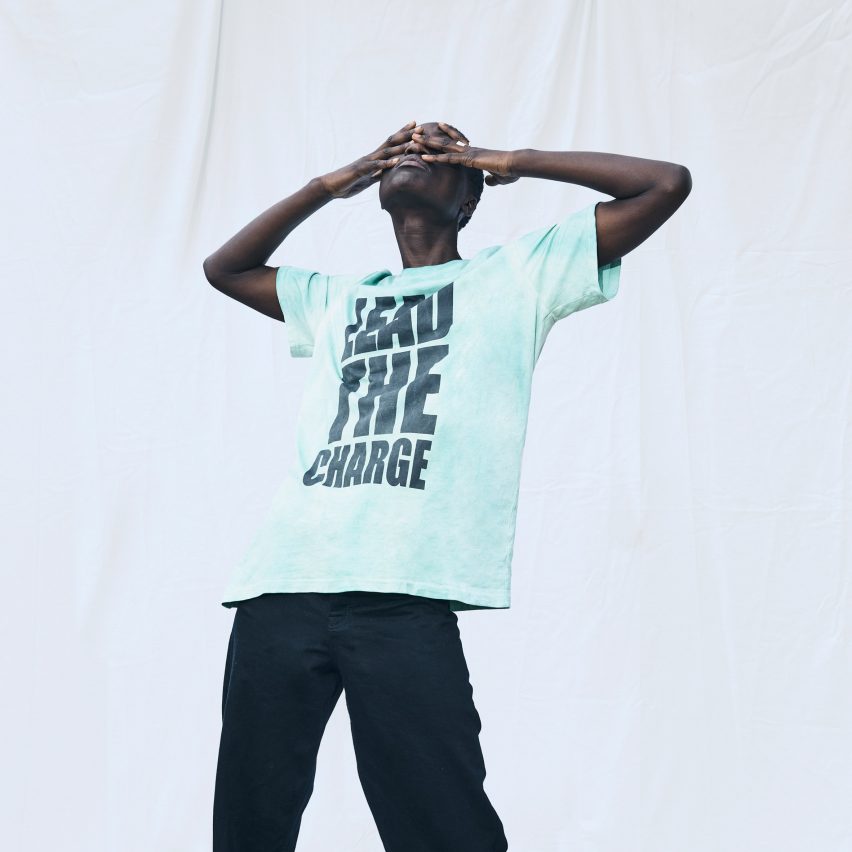 French car brand DS Automobiles has released a four-piece clothing range coated in living algae that sequesters carbon dioxide from the air and turns it into oxygen.

The capsule collection, which includes a bomber jacket, a trench coat and two T-shirts, uses the same photosynthesis process as plants, which is also performed by microorganisms such as algae.

In order to function the pieces need to be treated more like houseplants than standard garments, and require daily misting and regular sun exposure to keep the algae alive.

Launched at Paris Fashion Week, where DS Automobiles was one of this year’s partners, the unisex garments were designed by local clothing label EgonLab and imprinted with all-caps slogans like “Lead the Charge”.

“We love how each piece has turned out and how accessible they are for people looking to make a statement and reduce their carbon footprint,” said EgonLab’s founders, Florentin Glemarec and Kévin Nompeix.

While the T-shirts were completely covered in the algae coating, the two outerwear pieces only feature photosynthetic algae appliques.

The algae layer itself was developed by London research studio Post Carbon Lab (PCL) and is made entirely of natural ingredients, including plant- and yeast-derived nutrients, minerals and water.

“The process aims to replicate what nature already does but on textiles,” founders Dian-Jen Lin and Hannes Hulstaert told Dezeen.

“This is a living algae coating, consisting of layers of photosynthetic micro-organisms that can turn carbon dioxide into oxygen – the coating process as a whole took between seven and 10 weeks.”

In the time it took to coat, the studio says the collection absorbed 1.45 kilograms of CO2 – an amount which PCL claims it would take a six-year-old oak tree around half a year to sequester.

How much carbon dioxide the garments continue to capture throughout their life depends on how they are cared for and their exposure to environmental factors such as light, humidity and temperature.

For example, the algae is likely to absorb more carbon dioxide in warmer climates or during the summer months than during colder periods.

“We are still piloting the technology with users and partners like DS to gather more qualitative and quantitative insights before making conclusions,” PCL explained. “The lifespan of the garments can vary a lot, but with the proper care it could last years, according to our ongoing research.”

This involves keeping the algae hydrated through daily watering, washing the garments by hand using a neutral pH detergent, storing them in a bright, well-ventilated space and not applying any direct heat.

“There are hopes that this technology can be incorporated within both the fashion and automotive world as we look towards the future and gain a better understanding of its real-world capabilities,” the duo added.

DS Automobiles initiated the collaboration to draw attention to its partnership with Paris Fashion Week, as well as showcasing the company’s commitment to slashing emissions and making its entire fleet electric or plug-in hybrid by 2025.

The luxury car company began as an offshoot of Citroën, but is now its own brand.

Called Biogarmentry, the project was shortlisted in the sustainable design category at the 2019 Dezeen Awards.

Norman Foster, Virgil Abloh and more share their thoughts on the global impact of Covid-19