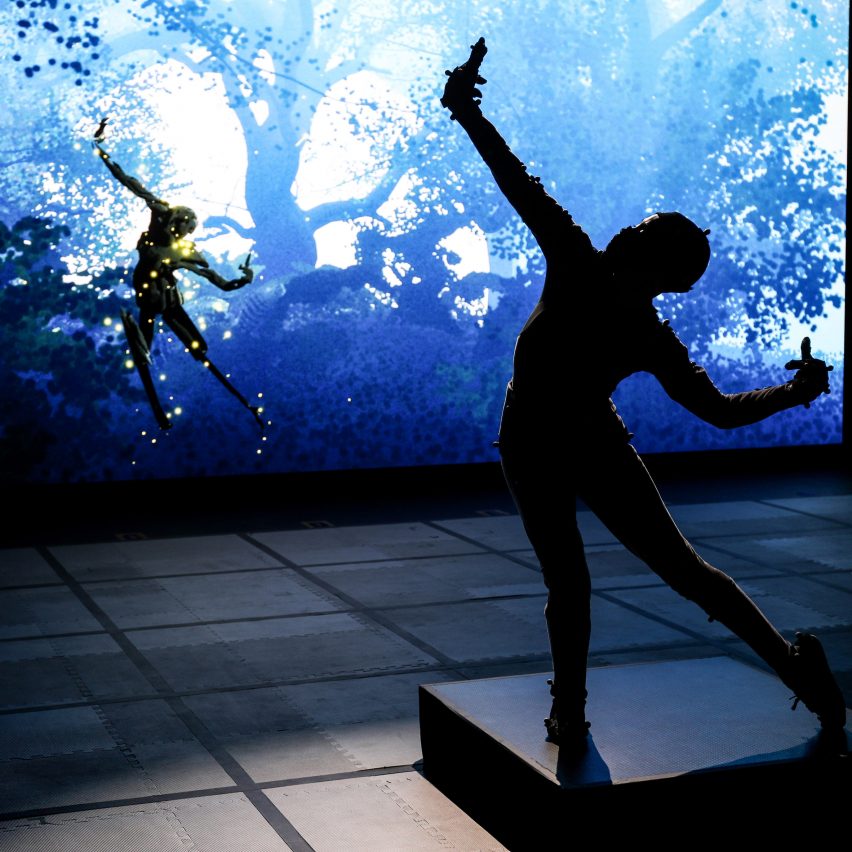 The Royal Shakespeare Company is set to put on a virtual play called Dream that will be performed by actors in motion capture suits and animated in real-time.

The digital world, which is revealed above in an exclusive video shared with Dezeen, was designed by London creative studio Marshmallow Laser Feast using the same game engine as popular online game Fortnite

Dream follows Puck, the mischievous sprite from William Shakespeare’s A Midsummer Night’s Dream, as he embarks on a journey through a magical woodland.

It will be performed live for ten nights between 12 and 20 March in a seven by seven-metre cube in Portsmouth’s Guidhall.

The play will be live-streamed to audiences who will see not the performers, or the stage, but their movements and voices expressed by virtual avatars in the virtual world.

This will be made possible through the same technology that has long been used to create characters for video games and feature films, such as Gollum in Lord of the Rings.

But while this process has previously involved lengthy pre- or postproduction to create an unchangeable outcome, Dream is animated as it is being acted out, which leaves unprecedented room for spontaneity.

“There’s space for performers to improvise and for us to allow for happy accidents to occur and to find beautiful moments through the rehearsal process,” Marshmallow Laser Feast (MLF) founder Robin McNicholas told Dezeen.

“This just hasn’t been done in the past because motion capture is generally quite a laborious and painting-by-numbers approach. We’re using the same techniques but in a live setting. As a result, it’s really high-risk but really exciting. It feels like an adventure.”

With the help of a web player that was specially designed for this project, viewers will be able to manipulate Dream’s virtual world via their laptop, phone or tablet.

To populate the virtual woodland, MLF worked with the play’s writer Pippa Hill to incorporate the flora mentioned in A Midsummer Night’s Dream that would be found in English forests at the time the play was written.

“Instead of presenting the traditional Victorian illustrated fairy world that Midsummer Night’s Dream is often portrayed with, we thought: let’s focus on the wonders of the natural world and the magic of it,” McNicholas explained.

“We take people from the canopy of the trees down to underneath the forest floor, which provided us with lots of different spaces to be creative within and to frame characters.”

Although the world was pre-designed, the way the characters move and interact with their environment will be determined by the actors, who will wear both facial rigs and mocap suits.

Vicon motion capture cameras will record the actors’ actions and expressions while large LED screens surrounding the performers help them to imagine where their avatar is in the virtual world.

Staging blocks, which are used to give the actors elevation, will be the only props involved in the play and will be animated as anything from rocks to roots and branches.

At key points, the actors will also able to use their movements and gestures to manipulate the play’s score, which was recorded by London’s Philharmonia Orchestra.

“We have all the different instruments recorded separately, so one performer’s arm could be a cello and another’s could be a harp,” McNicholas explained. “But it is tailored in such a way that any note that is played corresponds to the overall score.”

Viewers will be able to participate in the play as fireflies, which can be controlled via a mouse, trackpad or touchscreen. These fireflies will appear both on the viewers’ screens as well as on the LED screens surrounding the performers.

“The audience at home are part character, part lighting department, part costume,” said McNicholas. “And neither they nor the performers, the cast or the crew know the outcome of the performance. Each one is unique – it will look and sound different.”

The production is the outcome of a multi-year research and development collaboration, which was funded by the UK government’s Industrial Strategy Challenge Fund and aimed at finding new ways to engage audiences through technological innovation.

The Royal Shakespeare Company previously staged a mixed reality production in 2016, using live performance capture via Unreal Engine to render Ariel, the spirit from The Tempest, as a 3D hologram on stage.

The technology is set to become more readily available for smaller creators, as Unreal Engine announced last month that it would be releasing an app called the MetaHuman Creator, which allow anyone to create a realistic digital character in a matter of minutes.