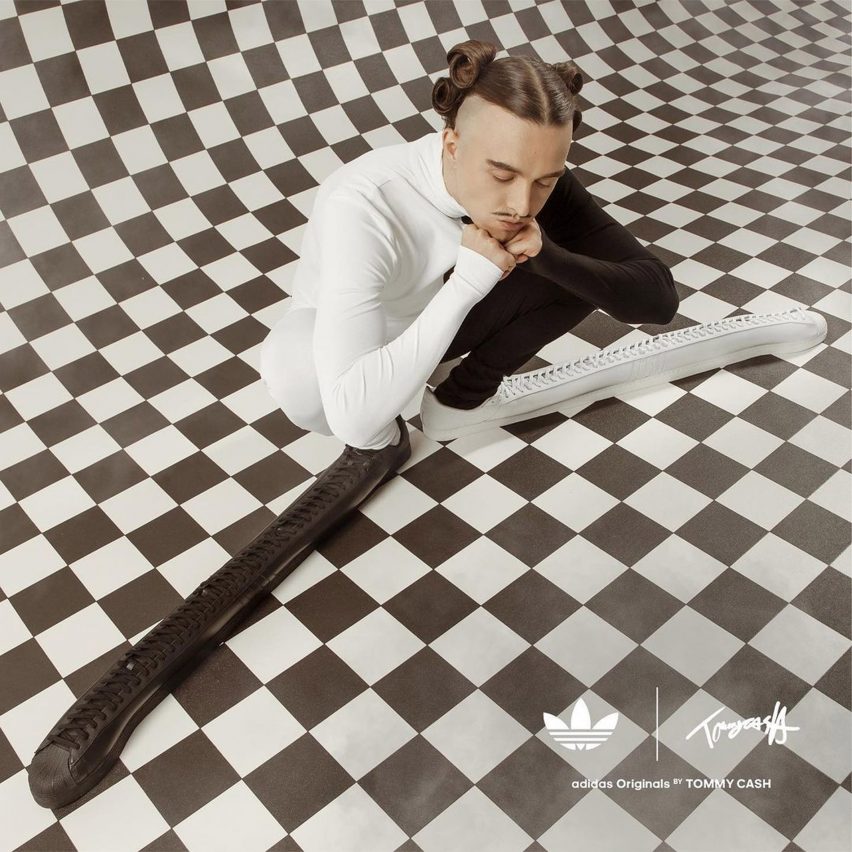 Adidas has collaborated with Estonian musician Tommy Cash to create a metre-long version of its classic Superstar trainers.

The one-off design features the same plastic shell toe as the original sneaker but its leather upper is dramatically extended to accommodate 40 rows of eyelets tied together with extra-long laces.

“When I said to Adidas that I want to make the longest shoe in the world as our collab, they were like WTF Tommy,” Cash wrote on Instagram. “But five months later here we are.”

Created especially for the rapper, the sneakers were made in mismatched colours with the right shoe all-white and the left one jet black.

This monochrome colour palette was informed by the ancient Chinese concept of yin and yang, suggesting two opposing yet complementary forces.

“Both the angel and the devil live in me at the same time – two opposites that are constantly fighting with each other,” said Cash, whose real name is Tomas Tammemets.

“So why hide one side of your personality when they can perfectly coexist with each other? [We] shouldn’t be too good or too bad. Balance is needed, as two opposites of yin and yang forming one whole.”

News of the collaboration prompted heated responses on Twitter, with users likening the trainers to baguettes, footlong Subways and clown shoes.

While some doubted their functionality, others suggested the oversized design could come in useful for enforcing social distancing or holding open the doors to a train.

Tammemets, who is also a conceptual artist, is no stranger to controversy. Much of his work is actively provocative, from explicit music videos to an exhibition created in collaboration with fashion designer Rick Owens that displayed a small tank holding millions of his own sperm.

Although the extra-long Superstars are a bespoke piece, the rapper’s collaboration with Adidas also spawned a more wearable pair of mismatched trainers – one black, one white and both normally sized.

A limited number of this pared-back version, which features Tommy Cash’s signature laser-engraved on the heel and a yin and yang print on the insole, was made available to the public via a raffle.

Adidas has previously collaborated with a number of well-known musicians and artists to reimagine its classic sneaker designs. While Pharrell Williams cast the brand’s Stan Smiths in bright blue and red, British fashion designer Stella McCartney created a fully vegan version of the leather shoe.

All images are courtesy of Adidas Russia.