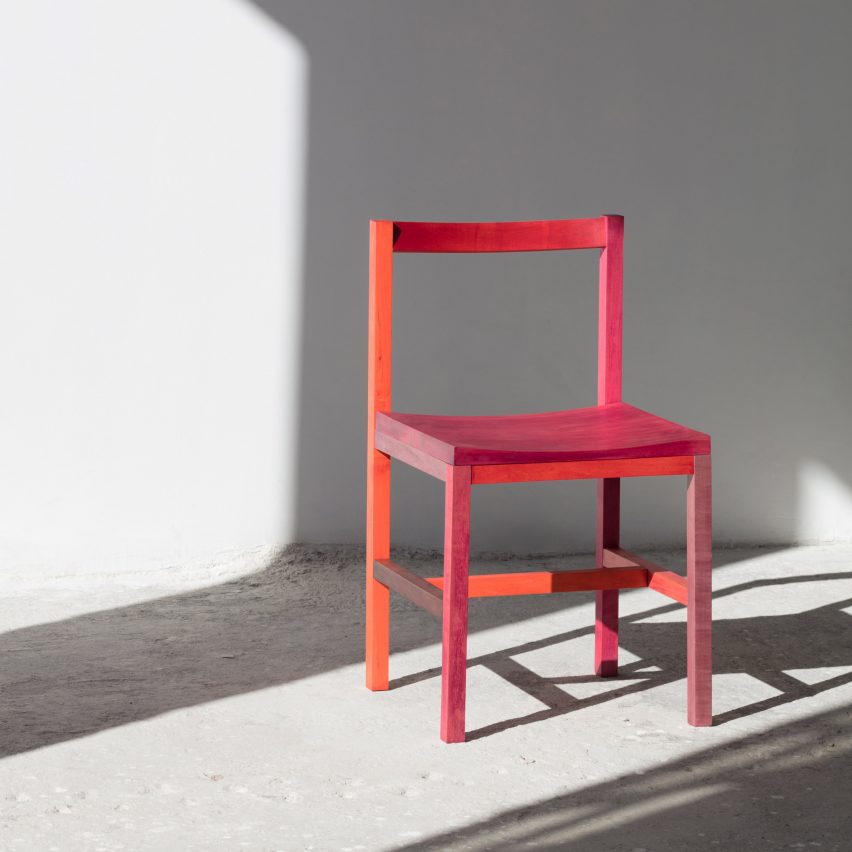 The simple maple wood seats get their colour from being immersed in a mixture of hot water and a pigment made from dried and pulverised cochineal bugs, a technique that was used to dye fabrics in Mexico for thousands of years.

Hernández adapted the technique for use in furniture, experimenting with different water temperatures and using acidic or alkaline additives to create six different colours, ranging from bright red and orange to purple and pink.

The result is a duo of chairs – one incorporating all six dyes and the other a bright magenta – that hope to show how local and traditional craftsmanship can contribute to a more sustainable future.

“Synthetic paints and dyes have helped the furniture industry to fulfil massive worldwide product demand but unfortunately, some of them are extremely toxic for the environment and humans,” Hernández told Dezeen.

“There are some new and innovative technologies that are transforming the industry but ancestral techniques can represent another approach for a promising future.”

Use of cochineal dye in Mexico goes as far back as 2000 BCE when indigenous people in the state of Oaxaca started to cultivate female cochineal parasites that live on cacti. When their bodies are dried, crushed and boiled, the carminic acid they contain creates a deep crimson pigment called carmine.

After the arrival of the Spanish in the early 1500s, carmine was widely exported to Europe and for a time became the most expensive dye in the world due to its unprecedented vibrance and popularity among monarchs, artists and aristocrats.

But since the advent of synthetic dyes, many of which are petroleum-based, carmine has been relegated to a food and cosmetic colouring.

Hernández sourced the pigment for his Grana chairs from a traditional producer in Oaxaca and used largely the same technique that was historically applied to fabrics.

“We tried to replicate the process as much as possible. Some of the most important variables that are part of the ancestral textile dyeing technique – like time of immersion, temperature and ratio – were adapted to colour wood, creating an ink that could last and dye intensely,” he explained.

“Wooden pieces were immersed in hot water and cochineal, exactly as the original technique. The only difference is that we adapted PVC pipes to immerse the large wooden pieces while avoiding the indiscriminate use of water.”

The designer also altered the dye’s pH level, in a method discovered by Mesoamericans over centuries of experimentation. The colour turns orange with the addition of acid, while a more alkaline solution takes on a deep purple.

The multicoloured Grana chair was designed to show off the variety of different finishes that can be created using this technique. The all-pink version, on the other hand, acts as a proof of concept that it could be integrated into large-scale production processes.

“The monochromatic chair can easily be reproduced and scaled up for mass production. There is just one ink that needs to be produced and all the pieces are immersed in it,” he explained.

“Thanks to the immersion technique we developed, the pigment penetrates deep into the wooden pieces, while traditional paint is only applied to the outside with a brush or sponge.”

With the growing reckoning around the environmental impact of petroleum-based materials – such as synthetic dyes – a number of other designers have started reintroducing carmine into their material vocabulary even outside of Mexico.

Among them is LA textile artist Rachel DuVall, who used cochineal to create a series of hand-woven tapestries, while Dutch graphic designer Evelien Crooy turned it into an ink and used it to screenprint a book about the insects.

Arp outdoor collection by Made Studio for Diabla