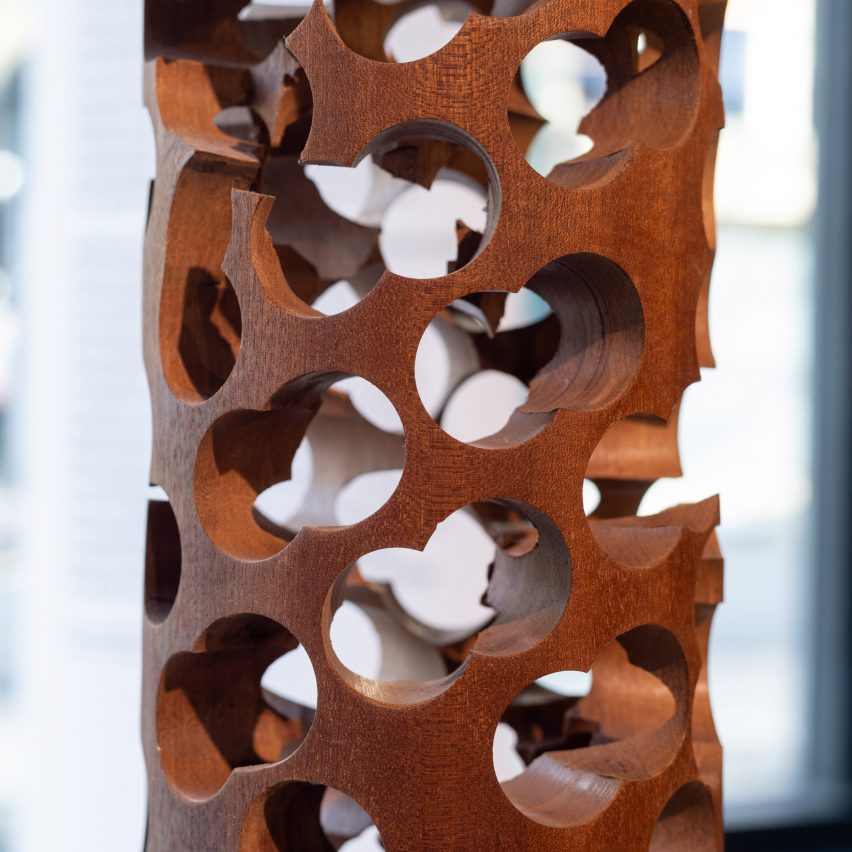 Dezeen promotion: the UK Timber Trade Federation is showcasing the winning entries of its Conversations about Climate Change design competition via a virtual exhibition and event series.

The competition, which received more than 100 responses from around the world, called on entrants to create an installation that would provoke discussions about global warming while showcasing the environmental benefits of responsibly sourced, tropical hardwoods.

“Responsibly forested timber is an essential part of the climate change solution; however, tropical forests have too often been undervalued and their forest land cleared for other uses,” said David Hopkins, CEO of the Timber Trade Federation (TTF).

“Our competition asked architects and designers to respond to tropical timber, think about the materials they usually work with and consider how the role of materials specified is vital for implementing change.”

Selected by a panel of judges including Yinka Ilori and Julia Barfield of Marks Barfield Architects, the six winning “conversation pieces” are now on display at London’s Building Centre for the next three months (temporarily closed due to the lockdown restrictions) and via a virtual 360-degree tour.

Among them are a series of sound sculptures by Singaporean designers Sheryl Ang and Yuta Nakayama, which are shaped like various tree species and emit different “heartbeats” that their particular response to climate stress.

A simple teak column by UK-based Michael Westthorp shows today’s sea level as well as its projected rise by 2120, while Julia and Julian Kashdan-Brown took a pillar of sapele wood and drilled holes through its heart to visualise the impact of uncontrolled deforestation – “take too much, and the system will collapse”.

Meanwhile British furniture maker Joseph Pipal created a series of blocks reminiscent of gold bullion, made from meranti, sapele and iroko wood, each emblazoned with the amount of carbon they are able to sequester from the atmosphere and store.

“I’ve been uplifted, as a maker, by the simple realisation that using sustainably sourced wood can help with the climate crisis,” he said.

Design duo Jeremy Yu and Tomos Owen as well as architect Tom Wilson are also among the winners.

All timber for the installations was sourced from countries that are currently working towards being licensed via the United Kingdom and European Union’s Forest Law Enforcement, Governance and Trade (FLEGT) initiative.

This sees countries commit to a Voluntary Partnership Agreement (VPA) and an action plan for overhauling their legal, social, business and environmental infrastructure to combat illegal logging and timber trade as well as deforestation.

“This landmark shift in governance and procurement means that FLEGT-licensed timber is safe, responsible and legal,” Hopkins said.

Alongside the exhibition, Hopkins will be speaking to Dezeen’s founder and editor-in-chief Marcus Fairs as part of a live-streamed interview that will delve deeper into the environmental benefits of responsibility sourced timber, and how the materials specified today can have a positive impact on the world’s forests and climate change.

The talk is set to take place on Thursday 11 March at 3pm and will be broadcast exclusively on Dezeen.

Explore the virtual exhibition and discover more about the six winning installations made from VPA tropical hardwoods on the Building Centre’s website.

This article was written by Dezeen for the Timber Trade Federation as part of a partnership. Find out more about Dezeen partnership content here.