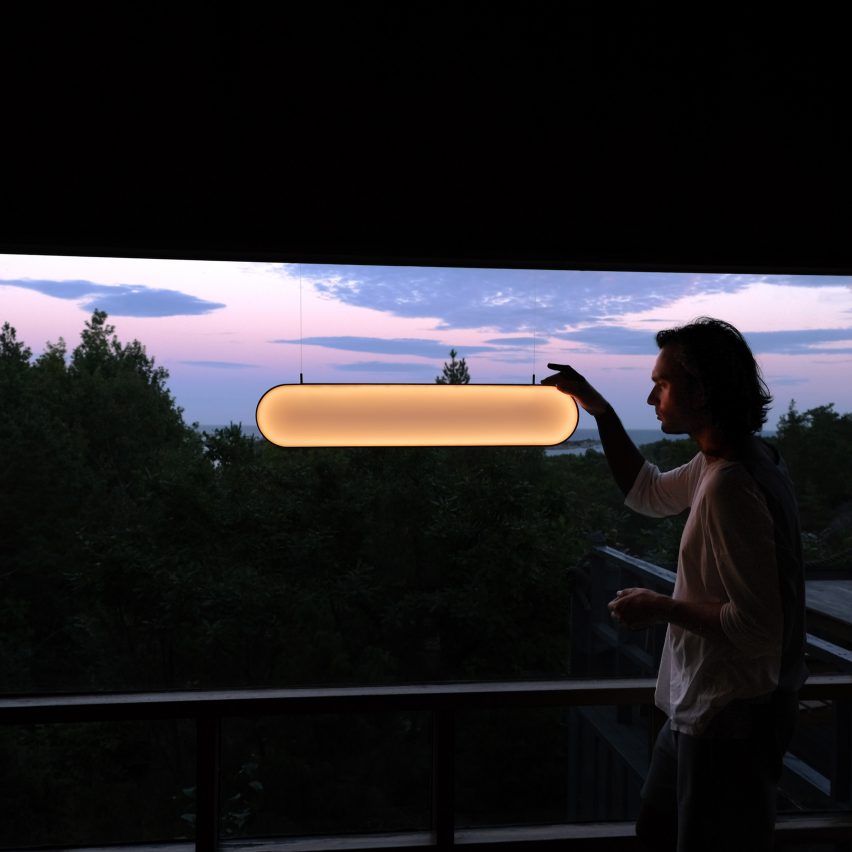 Dutch designer Marjan van Aubel has developed a solar lamp that is designed to be hung in front of windows so it can generate its own energy.

Called Sunne, the light is equipped with photovoltaic cells and an integrated battery, allowing it to harvest and store enough energy throughout the day to light up a room at night.

Van Aubel designed the lamp as part of an ongoing project to normalise solar technology by bringing it inside homes.

“To facilitate a shift in our perception towards solar, it also needs to be more accessible to a larger group of people,” she told Dezeen.

“People need to be able to familiarise themselves with it and have it in their surroundings. Sunne is a first step to integrating solar energy into our everyday life.”

Without the need for a plug or external electricals, the light is reduced to the shape of a simple oblong suspended from two steel wires.

One side, which is designed to be orientated towards a window, incorporates SunPower Solar Cells that Van Aubel developed in collaboration with The Energy Research Centre of the Netherlands.

“It makes much more sense to have solar outside, as there is more sun there. But it is inside that you need lights,” she said.

“By moving solar panels from the roof to hanging in your window, you have to focus even more on the process of harvesting the sun’s energy as it is receiving less light than outside.”

“The key was to work as efficiently as possible with all the light that is coming in and to store this in the integrated battery,” she continued. “The solar cells used for Sunne are so powerful they can drive cars. The Lightyear One car uses the same technology.”

Sunne’s room-facing side is covered in LEDs with the battery and printed circuit board placed behind them.

The light turns itself on automatically at dusk and can be adjusted to three settings – Sunne Rise, Sunne Light and Sunne Set.

These mimic the colours of the sky throughout the day. The lamp’s oblong shape is intended to be reminiscent of the horizon.

“I am that person who is always taking photos of sunrises and sunsets,” said Van Aubel.

“But what if you can capture this moment, take it home and enjoy it for the whole evening? And better yet, this magic moment is actually powered by the sun.”

The settings can be changed by touching a sensor on the lamp’s anodised aluminium frame.

Van Aubel and her team are planning to develop an app that would display information about the battery level and how much light is being received by the solar cells so users can position the lamp to ensure optimal harvesting conditions.

Van Aubel, who calls herself a “solar designer”, has previously created a photovoltaic “stained glass” window and a solar desk that can charge a phone, in a bid to showcase how this sustainable technology can also be beautiful and desirable.

Sunne will be made available to the wider public via a Kickstarter campaign, which launched yesterday.

When she shared images of the project at Dezeen’s Virtual Design Festival last year, Van Aubel described it as the beginning of a new “solar democracy”, in which literal and proverbial power is moved from centralised plants into people’s homes.

“I think this is quite a revolution,” she argued during the live-streamed talk. “It’s the first object that people can have in their home and can actually buy and [own] to have access to solar energy.”

While traditional roof-mounted solar panels are restricted to homeowners and those who can afford to have them installed, Sunne was designed to be accessible even for renters living in small urban apartments.

“Solar cells are becoming much cheaper, giving solar design lots of new potential. We can finally move beyond the price reduction and efficiency question and develop its aesthetics and the way it is integrated,” she added.

“In the future, your whole house should be a solar activator. So not only its roof but also its facade, windows and everything.”

In this pursuit, materials company LafargeHolcim has developed a photovoltaic concrete facade while last year’s James Dyson Award winner created a solar panel made from food waste that can be applied like a decal to windows and walls to harvest power from invisible UV light.