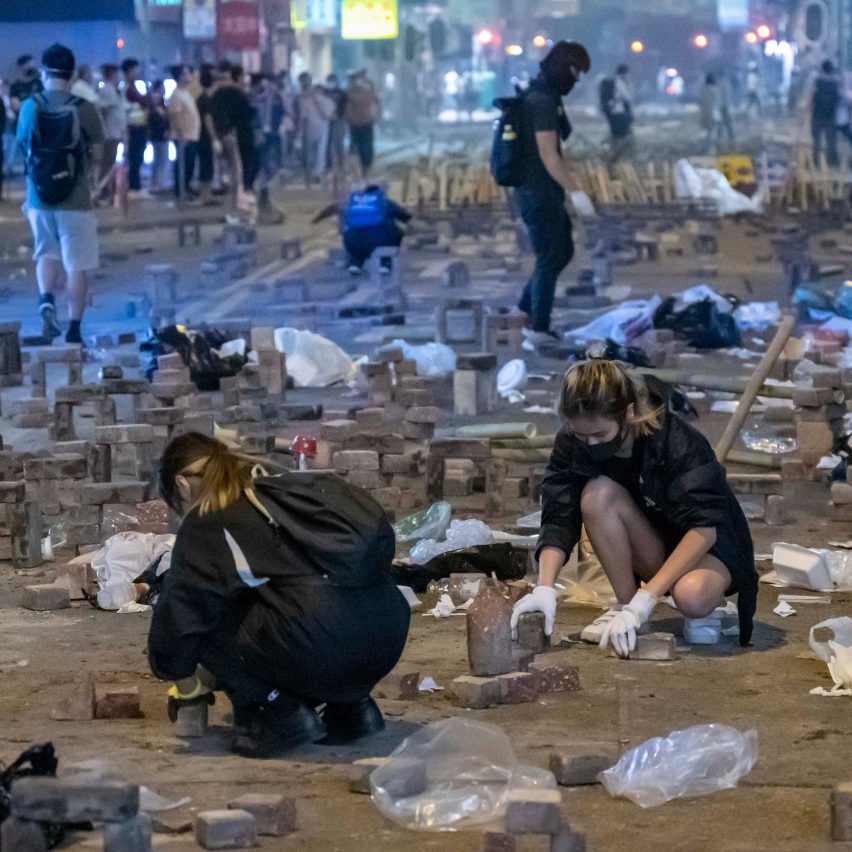 Makeshift roadblocks from Hong Kong’s pro-democracy protests won the People’s Choice category at the Designs of the Year awards because they could be made by anyone anywhere, says Design Museum curator Maria McLintock.

Dubbed Brick Arches, the roadblocks are ordinary bricks stacked ankle-high in clusters of three, set up on roads to stop vehicles moving forward.

When struck by a wheel, the top brick falls away and the remaining two bricks form a buttress that prevents the wheel from moving.

The design won the People’s Choice category at the Design Museum’s annual Designs of the Year awards.

“I think one of the reasons that the brick arches struck such a chord with the public was that their designed simplicity starkly contrasted with the complexity of the surrounding political moment,” said co-curator of Designs of the Year 2020 Maria McLintock.

Despite their small size, the protesters’ makeshift roadblocks have also been visually compared to Paris’ Arc de Triomphe or England’s Stonehenge.

“For such little structures to conjure metaphors of grand architectural monuments, there must be a powerful message at play here,” continued McLintock.

The makeshift roadblocks gained global media attention for their simple but highly effective design as activists used them to shut down roads during demonstrations over the past two years.

The Brick Arches’ originator is unknown, but the simplicity and efficiency of the design helped it to spread rapidly through the movement.

“The designer is anonymous, it is made of vernacular materials and anyone can replicate it,” said McLintock. “There is something quite fitting here in the notion that a project designed for the people was voted for by the people.”

Hong Kong’s pro-democracy protests began in June 2019 against plans to allow extradition to mainland China. Protesters said that this could threaten Hong Kong’s autonomy and infringe its citizens’ civil liberties.

Brick Arches joined another political piece that was named the overall winner of Designs of the Year 2020, a pink see-saw installed on both sides of the US-Mexico border wall by Rael San Fratello.

Discussing these two projects, McLintock said: “We were interested in how the discipline of transport design could cover more poetic interventions: how can design connect, or sever, contact between people?”

McLintock also acknowledged that an important aspect of Designs of the Year is the awards’ openness about what constitutes important design.

“A brilliant facet of Designs of the Year is that the exhibition provides a space for a discussion, rather than the last word, on the expanded role of design in contemporary society.”

2020 saw a year of people lending their creativity to protest. In April of last year, New York-based art-activist group The Illuminator projected calls to action on a Manhattan skyscraper in response to the US government’s handling of the coronavirus pandemic.

In June, digital artist Débora Silva created a series of 3D scans of people who took part in a Black Lives Matter protest in London’s Hyde Park in order to draw attention to systemic racism following the death of George Floyd.

The Design Museum currently remains closed while the UK is in lockdown but an exhibition showcasing the 2020 Designs of the Year will be on view until at least the 28 March. See Dezeen Events Guide for an up-to-date list of architecture and design events taking place around the world.

The post Brick Arches roadblocks from Hong Kong protests resonate as "anyone can replicate" appeared first on Dezeen.