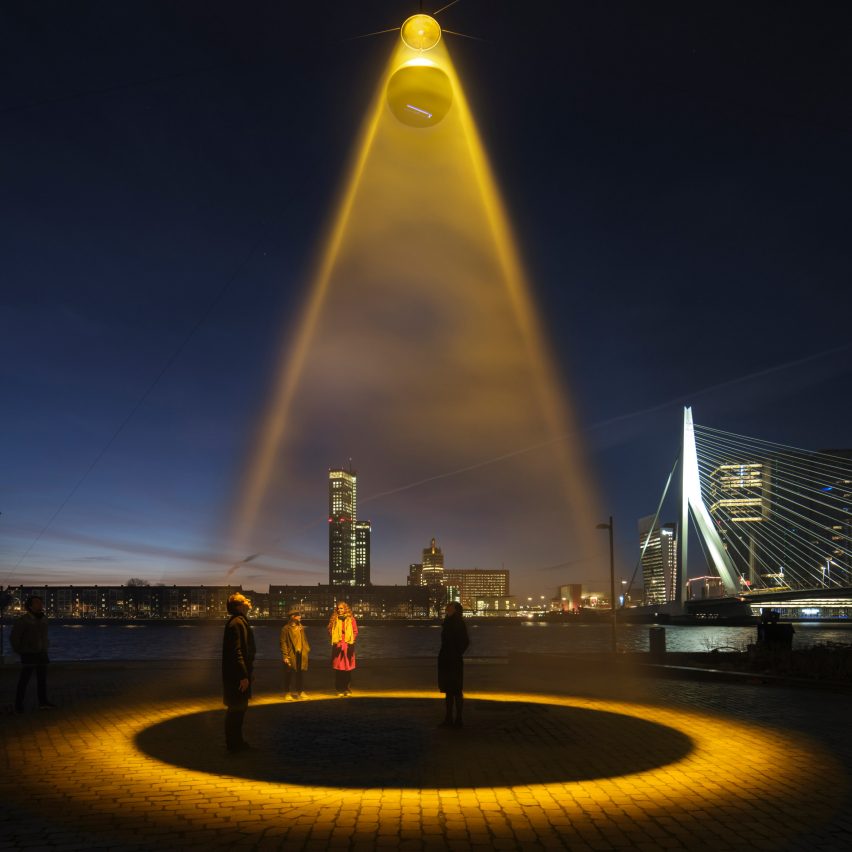 Studio Roosegaarde has proposed a light that uses ultraviolet radiation to sanitise outdoor spaces, claiming this could reduce the risk of people contracting Covid-19.

Urban Sun uses far-UVC, a type of ultraviolet light with a lower wavelength that is thought to kill viruses while potentially posing a lower health risk to humans.

“World’s first Urban Sun cleans public spaces of the coronavirus for better human gatherings,” the studio claims on its website.

Studio founder Daan Roosegaarde told Dezeen that the aim is to make public gatherings possible for the first time since Covid-19 became a global epidemic.

“We can make places up to 99.9 per cent virus-free in minutes, depending on weather and location, so the chance of getting sick or infecting each other is strongly diminished,” he said.

Roosegaarde added that the lamp could sanitise the cone of air beneath it as little as two minutes, dependent on factors including height.

However, a November 2020 report in the science journal Nature suggests that it can take up to 11.5 minutes for far-UVC light to destroy up to 99.9 per cent of airborne coronavirus particles.

It works by being installed overhead on a system of cables, so it can shine a large cone of sanitising light onto a space below.

“The goal is not to say that we don’t need the vaccine or we that don’t need masks,” said Roosegaarde. “Urban Sun doesn’t cure coronavirus, but it does allow social gatherings to be safer.”

The vast majority of Covid-19 infections happen indoors. Being infected outside is possible but significantly less likely as the virus gets dispersed and diluted by air currents.

Studio Roosegaarde unveiled the first Urban Sun in a launch event yesterday in Rotterdam, where the studio is based.

The design was developed in collaboration with scientists and researchers from the USA, Japan, Italy and the Netherlands.

It is based on research published in 2018 by Columbia University and Hiroshima University showing that while traditional 254nm UV light is harmful to humans, far-UVC light with a wavelength of 222 nanometers is safe.

Both are effective at killing viruses in the air – which is the cause of the vast majority of Covid-19 transmission – in water and on surfaces.

Far-UVC technology is already being developed for use in indoor spaces. Boeing is looking to integrate it into its aeroplanes to enable safer air travel, for instance. But Roosegaarde claims to be the first to try to make it work outdoors.

Lighting brand Artemide has already released an indoor lighting product called Integralis that uses regular UVC radiation to sanitise spaces. However, the product can only be used when people are not occupying the room as regular UVC light is harmful to humans.

Roosegaarde hopes to take Urban Sun to large-scale events such as the Olympic Games or Burning Man Festival but also believes it could be used to create safer gathering spaces at design fairs and festivals such as the Salone del Mobile in Milan or the Venice Architecture Biennale.

“Big cultural events are crucial to our culture, but right now we are surrounded by plastic barriers and distance stickers, and we’re trapped in our Zoom screens,” Roosegaarde told Dezeen.

“We need to design our new normal because if we are not the architects of our future we are its victims.”

Roosegaarde often works with light in his designs. As well as creating visual installations, he is interested in using light as a tool to solve design problems.

Examples include Grow, a light installation designed to highlight the beauty of agriculture while also improving crop growth, and Space Waste Lab, which used light to track pieces of space waste.

The designer decided to explore the potential of far-UVC after reading about it in a science journal. He self-funded the pilot Urban Sun, to get the idea off the ground.

Roosegaarde hopes the product will help to speed up public acceptance of the technology and encourage other designers to work with it.

He said the design meets the safety standards of the International Commission on Non-Ionizing Radiation Protection, while its light source is calibrated by the Dutch National Metrology Institute.

“I’m not a scientist, I’m not the inventor of the far-UVC. What I can do is activate it and share it,” he said.

The movie is by MediaMonks and Studio Roosegaarde. Photography is by Willem de Kam, Ossip van Duivenbode and Daan Roosegaarde.

Update: Studio Roosegaarde has explained more details of the Urban Sun in an interview with Dezeen here.