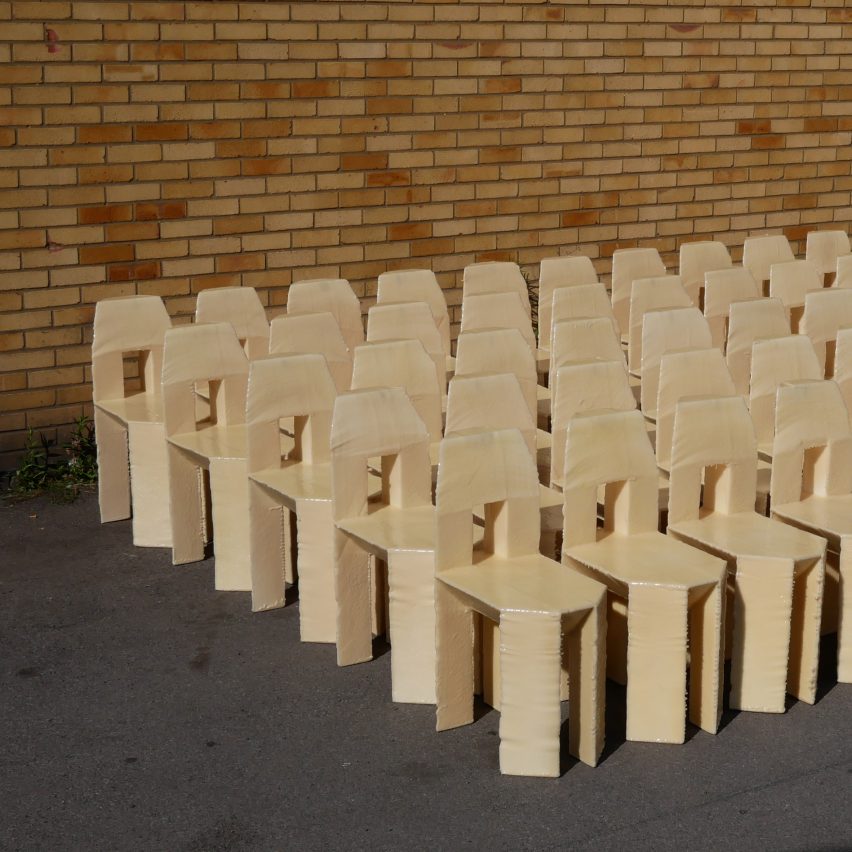 As a performance, a game and a test of strength, British designer Max Lamb made 60 chairs by hand out of slabs of polystyrene over just three days.

Aptly named 60 Chairs, the project was an experiment by Lamb to explore the difficulties involved in a human production line that only uses one pair of hands.

According to the designer, the chairs show what happens when one person handcrafts a series of similar objects, rather than relying on the efficiency and accuracy of a machine.

“The making process was a constant counting game,” said Lamb.

“So much repetition. So much counting. So much longing to get to chair number 60.”

Lamb constructed his chairs from five by 10-centimetre-thick polystyrene blocks then coated them in un-pigmented polyurethane rubber.

60 Chairs required meticulous forward-planning in order to ensure that Lamb met his target. Each slab of polystyrene produced a set of 12 chairs comprising 240 legs and 540 individual parts. Little material could be wasted.

After the chairs were made, Lamb also individually numbered them, and finally photographed the chairs before wrapping and packing them up for sale.

The project took place in a box van that Lamb rented in order to transport his materials. With little space to construct the chairs, the designer opened up the back of the van and used it as a parked workshop.

Polystyrene is a versatile material that designers are using in myriad ways, especially to produce meaningful three-dimensional work that questions how we interact with the world around us.

Greek designer Savvas Laz created a sculptural chair from discarded Styrofoam packaging in order to highlight the issue of packaging waste, and Graham Hudson produced a temporary installation at London’s Burberry flagship store of a robot that appeared to mill three-dimensional sculptures out of blocks of polystyrene.

Max Lamb is a British furniture designer whose recent projects include an installation of sculptures made from three-dimensional tiles for Japanese brand Tajimi Custom Tiles.

Photography is by Max Lamb.