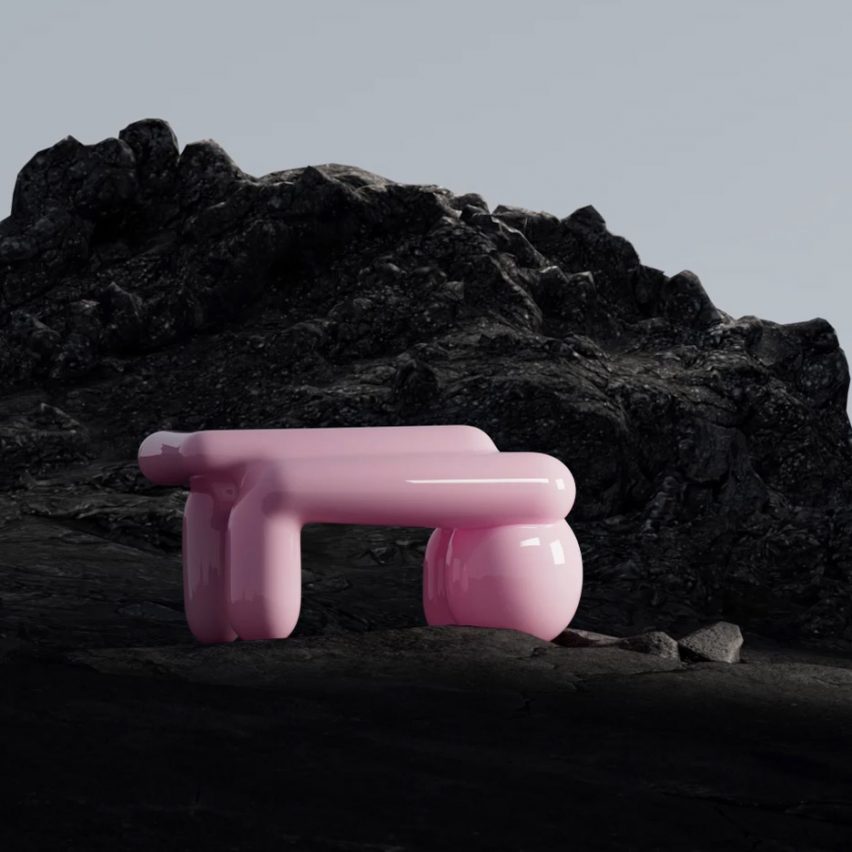 Argentinian designer Andrés Reisinger has sold ten pieces of virtual furniture in an online auction, with the most expensive non-existent item fetching $67,777.

Reisinger, who rose to prominence on Instagram for his renderings of surreal furniture pieces, sold the items in an online auction under the title The Shipping.

Each of the virtual items can be placed in any shared 3D virtual space or “metaverse”, including open worlds such as Decentraland and Somnium Space and Minecraft.

Alternatively, the 3D models can be used in virtual- and augmented-reality applications as well as development platforms such as Unity and Unreal Engine to create games, animations and CGI movies.

The virtual furniture, which went under the hammer via online marketplace Nifty Gateway, sold in less than 10 minutes for a total of more than $450,000. A custom piece that Reisinger has promised to design in collaboration with the buyer fetched the highest price at $67,777.

“It is a very ambitious project,” Reisinger told Dezeen. “I am the first to do it and I hope that it opens the doors to many other artists and designers. This is a new way, a complementary way to continue growing our careers and businesses.”

Among the digital collectables that were auctioned off as part of The Shipping is Reisinger’s Hortensia chair, which previously went viral on Instagram leading the designer to turn his 3D render into a real product.

Other items are what he describes as “impossible objects” – a shiny pink table so bulbous it resembles a bubble of chewing gum, a deflated silver balloon that acts as a couch and a chrome storage unit with individual drawers balanced on its undulating frame.

Five furniture items, including the custom piece, will also be turned into real, physical objects and sent to their respective buyers.

This includes the Time Table, which has a large, pink sphere for a leg, the matching ABBA office chair with its three-tiered seat, as well as a chair reminiscent of Terje Ekstrem’s seminal Ekstrem design from the 1980s.

Buyers can place the digital version of these pieces inside of a virtual gallery or sell them for profit when their value rises.

The authenticity and ownership of each item is verified via a non-fungible token (NFT), which is individually identified on a blockchain much like a cryptocurrency transaction.

Each item with an NFT can be traced back to the maker and owner to prevent replication or forgery, in a similar way to how blockchain technology records Bitcoins changing hands.

“Ownership of these tokens is immutable, which means gamers and collectors can actually possess their NFTs rather than the companies that created them,” said Reisinger. “If you buy a song on iTunes, on the other hand, you don’t actually own what you’re buying. You just purchase the license to listen to the music.”

“For artists, being able to sell artwork in digital form directly to a global audience of buyers without using an auction house or gallery allows them to keep a significantly greater portion of the profits they make from sales,” he continued.

“Royalties can also be programmed into digital artwork so that the creator receives a percentage of sale profits each time their artwork is sold to a new owner.”

According to Reisinger, the auction was an experiment in creating an engaging exhibition format that maintains viewer interest despite being entirely online, while offering a glimpse at a new “hybrid reality”.

“We are not escaping from the material world anytime soon,” he explained.

“Instead, I believe we are expanding our experience into a new hybrid era of extended reality, in which art and culture are freed from spatial and temporal constraints and the rules of experience are rewritten,” continued.

“As the physical and digital worlds continue towards unity, I will keep creating across them to reveal the vast human potential their fusion is forming, to signal that it’s no longer necessary to touch something to be touched by it and to call into question where the imagined ends and the real begins.”

The emergence of a parallel virtual world was supercharged last year as people were constrained to their homes due to the ongoing coronavirus pandemic. Rapper Travis Scott held a concert in online battle Royale game Fortnite that was seen by more than 12 million people while major fashion houses from Gucci to Marc Jacobs made their first forays into digital-only garments.

Digital fashion house The Fabricant told Dezeen that it had witnessed a marked rise in demand for virtual outfits due to Covid-19 shortly before collaborating with shoe brand Buffalo London on a flaming digital trainer.