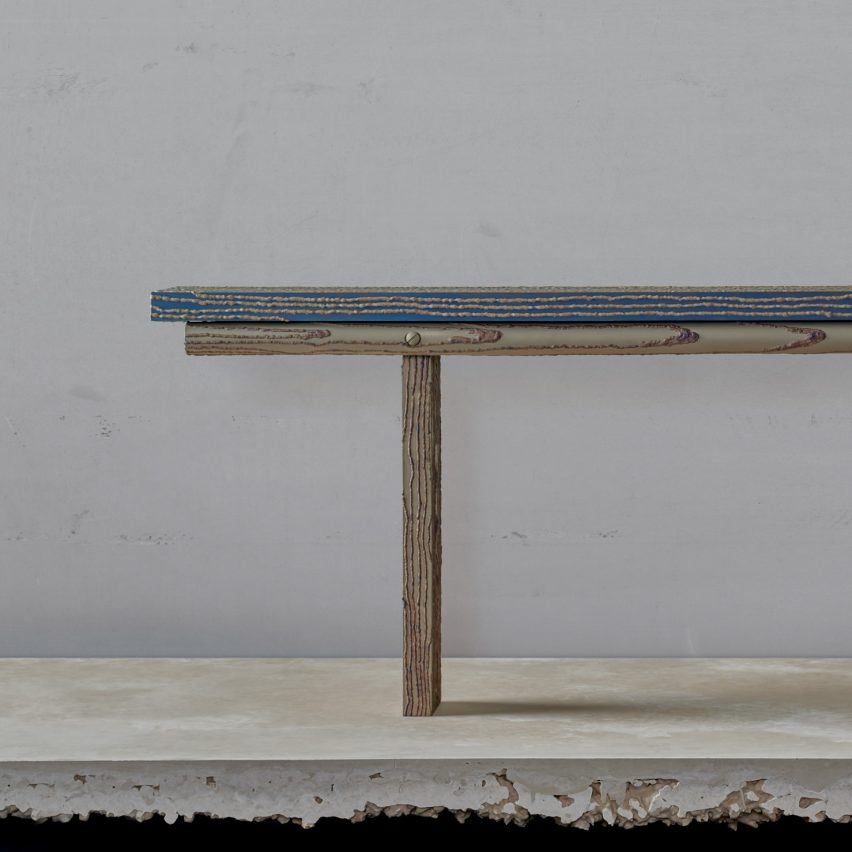 Dutch designer Ward Wijnant has created a bench made from different kinds of steel, which are welded together to mimic wood grain and oxidised to reveal their “crazy, hidden colours”.

The Carbon bench, which was designed to push the aesthetic and textural possibilities of steel, has an iridescent blue and pale yellow finish that doesn’t stem from paint or lacquer but from the chemical reaction set off by the firing process.

To create the product, Wijnant welds a pattern of raised stainless steel welts onto thick slabs of regular steel and vice versa.

These building blocks are then combined to form the bench, which has a more or less uniform colour when the steel is first welded together. But once it goes into the oven to be tempered, the two kinds of steel respond in different ways.

As the slabs heat up, a film of iron oxide forms on their surface in a process known as oxidisation, changing colour as temperatures increase and going from yellow to brown, then purple and finally blue.

Compared to normal steel, this process requires higher temperatures for stainless steel, which is enriched with chromium to prevent corrosion, creating the bench’s two-tone finish.

“Normally, steel all looks the same and then when you put it in the oven, you get these crazy, hidden colours,” Wijnant told Dezeen. “It’s all fired on the same heat. But, the steel turns blue while the stainless steel turns a light yellow.”

The pattern on the bench’s surface is initially traced with a pencil, like a “hand-drawn painting of wood”.

Wijnant then goes over it with a TIG welding machine to create a raised, textured finish using either the same or a different kind of steel, so the base and the linework end up being cast in matching or contrasting colours.

“I really wanted to create a more organic object, because steel is normally super hard and straight,” he said. “I want to change this perception.”

Wijnant, who is an alumnus of the Design Academy Eindhoven, plans to create an entire collection of furniture around this process, playing with the range of colour and texture combinations that can be created using this one material family.

Italian furniture brand De Castelli has previously made use of the oxidisation process, together with etching and polishing to create a series of storage solutions that show off the versatility of metal.

Similarly, Alessandro Zambelli created a series of furniture from a puzzle of small metal pieces, each oxidised to a different shade.

The post Ward Wijnant's Carbon bench is an "organic object" made from steel appeared first on Dezeen.