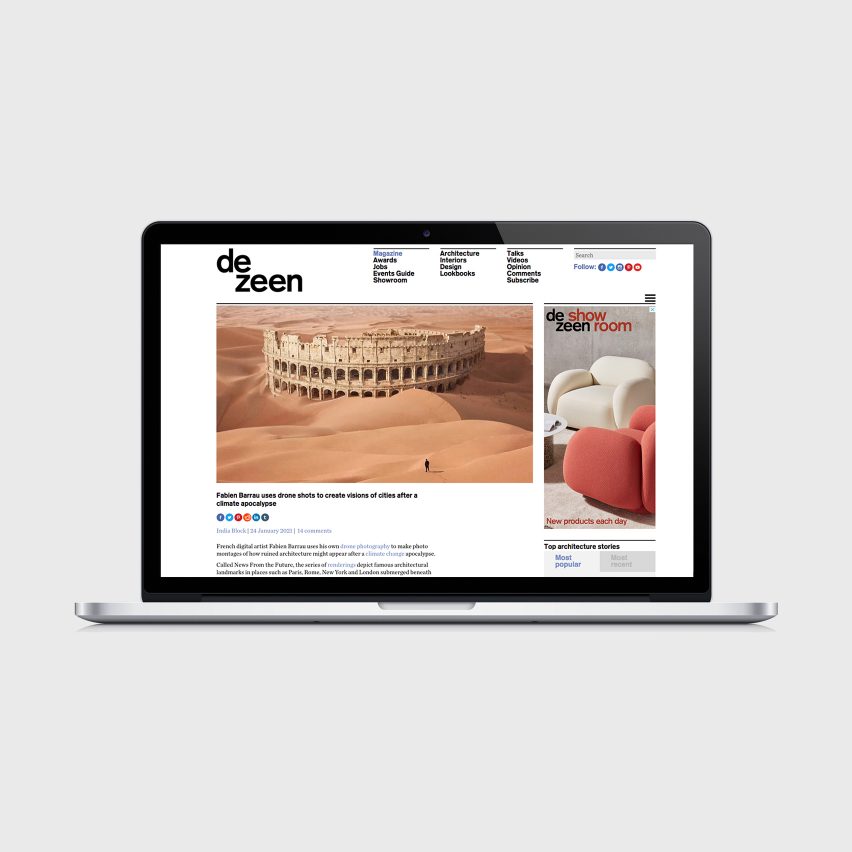 We were shocked to learn that Dezeen has been ranked last in a survey of websites’ carbon emissions. We are determined to improve, says founder and editor-in-chief Marcus Fairs.

We have a guilty secret. While Dezeen has long championed sustainable architecture and design, we’ve recently become aware that our own carbon footprint is pretty bad.

The internet is far from green: loading pages, watching videos, participating in Zoom calls and sending emails all require plenty of energy. In addition, the devices we use to access the web create pollution.

But with all the recent focus on environmental villains including flying and concrete, the internet has got off lightly, even though communications technology is on course to be a bigger carbon producer than any country apart from India, China and the USA by 2025.

At Dezeen, we have gradually become aware of the carbon cost of running a popular website.

For example, a single regular email produces four grammes of CO2e – carbon dioxide equivalent, which is the standard way of measuring carbon footprints.

If the email contains images that need to be loaded, the figure will be much higher. If, as we do, you send newsletters to tens of thousands of readers every day, that quickly adds up to a frightening amount.

We’ve been trying to reduce our carbon footprint by switching to renewable energy at our office, sourcing office supplies from sustainable suppliers and, for our Dezeen Day conference in 2019, striving to reduce our environmental impact by encouraging people to walk to the venue, banning single-use plastic and minimising the number of speakers we flew in from overseas.

At the conference, we worked with environmental consultant Sophie Thomas to calculate the event’s carbon footprint. We subsequently offset the estimated eight tonnes of CO2 generated by the conference.

This figure included an estimate of the impact of email newsletters we sent about the conference but it didn’t take into account the impact of uploading content – including videos and images – to Dezeen.

This was a blind spot.

Since then, global internet use has increased, particularly since the pandemic has forced people to become more reliant on digital communication, and its carbon footprint is growing.

Estimates vary, but Sustainable Web Design claims that “the internet currently produces approximately 3.8 per cent of global carbon emissions.” That puts it way ahead of aviation, which accounts for around two per cent.

Meanwhile, only a quarter of the internet is thought to be powered by renewable energy.

This week, Formafantasma highlighted the issue by redesigning its own website to reduce emissions. The new site uses smaller images and standard fonts to reduce the power needed to load the site, which is now hosted on a platform powered by renewable energy.

Despite knowing all this, we were still shocked to read a report on Dezeen’s carbon impact on EcoPing, a service that helps websites reduce their power consumption.

“You would need a forest with 96,600 mature trees to sequester this much CO2,” it says.

Dezeen’s biggest problem is its images. We have almost 750,000 of them in our archive

EcoPing ranked us last in a table of 25 high-traffic blogs, saying: “It boggles the mind really how bad this website is for the world and it’s only the 3,500th most popular website!”

Even allowing for scaremongering (after all, EcoPing is trying to drum up business), this is not good.

We got in touch with EcoPing co-founder Dryden Williams to find out more. It turns out he’s a huge fan of Dezeen, which is one reason why he included Dezeen in his blog ranking.

Another reason is that we openly publish our traffic stats each year. This information helped Williams compile his report.

Dezeen’s biggest problem is its images. We have almost 750,000 of them in our archive, many of them large, high-resolution files.

This amazing visual resource is a big part of the reason why Dezeen is so popular. But each time a visitor loads an image, there is an energy impact both on Dezeen’s servers (which are located all around the world) and on the device used to access the site.

“Images massively affect your [carbon] ranking,” Williams told us. “Or perhaps it’s more correct to say poorly optimised images do. It is very possible to have lots of images that don’t have as much impact.”

Williams pointed out improvements we could make including “thinking more sustainably about web design, cleaning up the code you write, to optimising your images correctly.”

“Some small tweaks can make huge positive changes to improve your website carbon emissions,” he said. “Shaving off a single kilobyte in a file that is loaded two million times reduces CO2 emissions by an estimated 2950kg per month.”

We have a lot of work to do

This is the same amount of CO2 saved each month as five flights from Amsterdam to New York, Williams estimates.

It’s not all bad. Williams notes approvingly that Dezeen uses StackPath to manage its global server network, ensuring that content is always stored as close to the user as possible (“less distance = less energy used to transfer it over the network,” as he puts it).

But we have a lot of work to do. We’ve been in touch with our developers at Den Creative, who are working on a plan to reduce our impact (to be fair, they have been nagging us to work on our load speed for a while, not for environmental reasons but because it will improve the user experience).

The top priority is image optimisation (using new WebP formats) followed by an audit of third-party scripts on the site that slow things down and increase power consumption.

We are committed to being better. The carbon footprint of our website will no longer be pushed to the back of our minds. We will keep you posted on our progress.

The post "The carbon footprint of our website will no longer be pushed to the back of our minds" appeared first on Dezeen.