Hugo McCloud’s artworks use plastic bags instead of paint 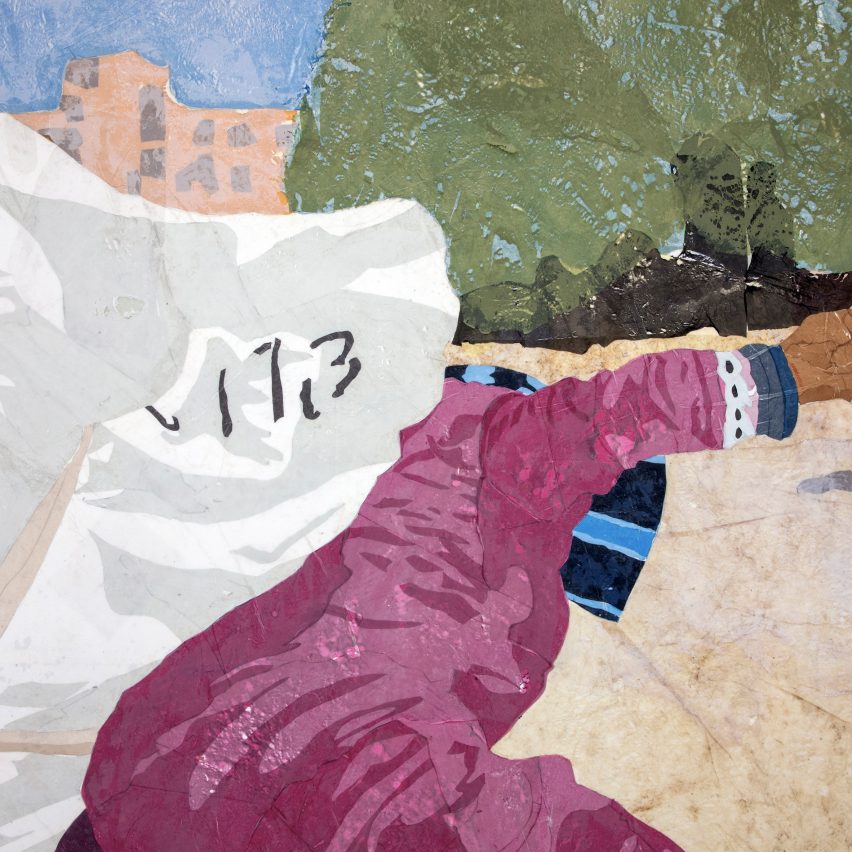 New York artist Hugo McCloud has created a series of artworks that contain no paint or glue, only thousands of small plastic pieces cut from single-use bags and melted together to form a motif.

The series, called Burdened, is on view at Sean Kelly Gallery in Hudson Yards, New York until 27 February and spans 31 original pieces created by McCloud while quarantining in his Mexico studio.

To create the collages, which mainly depict scenes of labour, McCloud first traces them onto a wood panel before filling them in with the multicoloured plastic scraps.

These are individually cut from plastic bags and layered on top of each other, much like individual brush strokes, before being fused together with an iron.

“Due to the nature of the material and its thinness, you can always see underneath, so one colour applied on top of another creates a third colour,” McCloud told Dezeen.

“There has to be a lot of forethought and planning before starting. The plastic is fused onto the panel with an iron, there is no removal or covering up, you must know what you’re trying to achieve. With paint, there is more freedom for chance and emotions. I do miss some of that but working with the plastic is very meditative, with an understood direction.”

The bags come from recycling yards and waste management companies, or else the artist picks them up off the street himself or reuses ones that were given to him while shopping.

Often, their branding remains visible in the final art piece, acting as a reminder of the material’s former life and reinforcing its familiarity.

Based on photographs found on the internet, the collages depict the movement of people and goods around the world, from workers transporting wares on their backs and bikes to refugees attempting to cross the Mediterranean Sea by boat.

In this way, the Burdened series is not just a commentary on the environmental impact of single-use plastic but also an exploration of how this ubiquitous material transcends class and geography.

“Traveling in India, I saw multi-colour plastic sacks everywhere and started to understand their downcycle, from the companies that purchased and used them to distribute their products, down to the trash pickers in Dharavi slums,” the artist explained.

“The idea that these plastic bags would always be around – never biodegrade – interested me, and made me curious about the hands and lives of the many people they would pass through.”

The exhibition also includes a mini-series of collages showing flower arrangements, which McCloud made to offer the show’s visitors and himself a moment of respite from the dispiriting news cycles and monotony of lockdown.

McCloud, who has a background in industrial design, is known for creating “paintings” from unusual, often three-dimensional materials like bitumen or aluminium sheeting.

To mark New York City’s ban on plastic bags, local artist Robin Frohardt created a grocery store installation last March that was stocked with produce like tomatoes and berries, all formed from discarded single-use carriers he had collected from the city’s streets.

Dutch food design studio Sweet Sneak has previously explored pollution and its environmental impact through a photo series, in which common foods and drinks such as beer and sushi were topped with styrofoam bubbles and wrapped in plastic bags.

Burdened is on view at Sean Kelly Gallery until 27 February 2021. See Dezeen Events Guide for an up-to-date list of architecture and design events taking place around the world.

The post Hugo McCloud’s artworks use plastic bags instead of paint appeared first on Dezeen.

Formafantasma redesigns website to reduce “pollution connected to the internet”