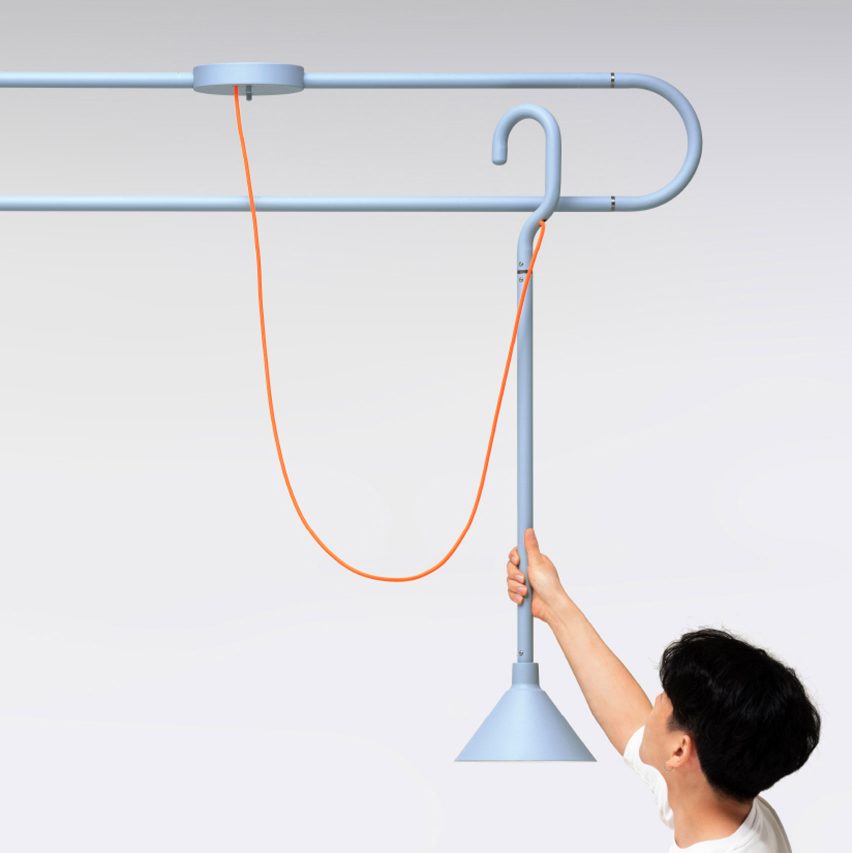 Named Hook, the modular lamp was developed through observing the different ways in which the market stall tellers hung and displayed items of clothing.

“The project began by observing people’s behaviour in Dongmyo and looking for new uses for things,” said Jo.

“I was inspired by the fact that hangers are used as the easiest way to place things where users wanted them.”

The resulting Hook light is a pendant-style lamp with a hook at one end that is suspended and hung from a rounded rail, which doubles as a ceiling mount.

The pendant is tethered to the mount by industrial draped wiring that was designed for users to be able to move and adjust the placement of the light.

The designer constructed the lamp by bending steel piping to create the hook and curved elements, while the shade was produced by spinning steel into a conical shape.

Boasting a pale blue finish, the lamp is paired with polished metal joints and bright orange wiring that has been left part exposed to create a playful colour contrast.

The modular lamp can be customised into different sizes by replacing sections of it with longer or shorter parts.

“Hook’s size can be adjusted by replacing pipes with long and short ones depending on the size and environment of the space,” the Seoul-based designer told Dezeen. “Therefore, it was designed as a modular structure.”

The Hook lamp is currently only a prototype, but the designer hopes that if and when it is produced, users will eventually be able to customise the modular lamp in a variety of colours and sizes.

“Only one set of colour configurations has been made for the prototype, but if produced in a variety of colours, users will be able to customise them as they wish,” he said.

Other projects that use traditional and cultural references to create furniture and objects include a series of chairs that draw on 1920s art deco and traditional Korean aesthetics and Via Maris’ reimagining of traditional Jewish objects.