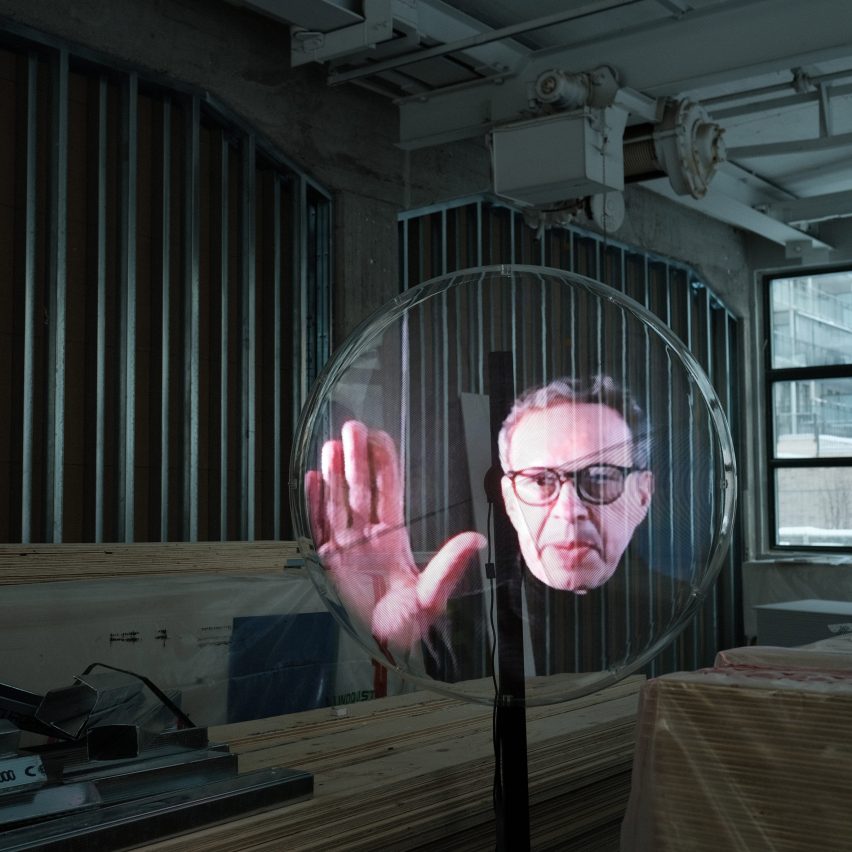 Digital technologies will revolutionise the way that new designs are presented says Tom Dixon, who has sent a hologram of himself to Stockholm to launch a range of accessories due to coronavirus restrictions.

With Covid-19 preventing the British designer from physically attending Stockholm Design Week, he is instead using a digital version of himself to present the brand’s new Cloud accessories collection.

“Eventually I will dematerialise and become an avatar”

Speaking to Dezeen ahead of the event, Dixon said that digital technologies have made it possible for brands to explore other ways of presenting their products, besides the traditional trade fair.

“You have to have more inventive ways of reaching people right now,” he said. “New formats will emerge that are more of a mix of digital and physical, because that’s the way the world is moving.”

Dixon suggests the use of deep-fake technology will make it possible to create even more realistic illusions in the future. As a result, designers and brand directors might be able to avoid flying around the world so much.

“I think eventually I will dematerialise and become an avatar,” he quipped, “then I’ll be able to be present in hundreds of different spaces at the same time.”

Finding an alternative to the trade fair

Exploring new formats is not just a response to the pandemic, Dixon claims, but also to the limitations of the design fair as a marketing platform. Though he believes trade fairs will always serve an important role, the designer said new formats are essential in reaching new audiences.

“Trade fairs are a huge burden in terms of time, energy and money,” he said.

“They have been very useful to us, but you end up possibly preaching to the converted,” he added. “The idea is to go beyond your comfort zone.”

Dixon had already been exploring new presentation methods before Covid-19 hit Europe. His 24 Hours concept, which he debuted in Paris in January 2020, is the result of these ideas.

Instead of taking a stand at the Maison&Objet furniture fair, the 24 Hours in Paris programme saw Dixon’s studio create an events schedule spanning eight locations across the city. From flower arranging to a lunch event, each activity revolved around the brand’s new products.

A video was then produced showing all the events that took place within the 24-hour period, so they could be shared with a wider audience.

“Instead of sitting in a trade fair [for days], we thought maybe a better of doing it was to co-opt friends and partners in a city, hit it hard and fast then get out, like a crime scene,” Dixon said.

This approach means that all activities can be condensed into a single day, and there is no need to spend time and money building an exhibition stand. It also creates greater opportunities to collaborate with companies outside the design industry.

Dixon repeated the formula with a 24 Hours in Copenhagen event in September, coinciding with 3 Days of Design. But travel restrictions meant that they had to rethink the strategy for the Stockholm event, which is taking place today, 11 February.

Live talks are possible, with the use of the video calls, but this format creates a clear divide between locations.

But by using hologram conferencing technology, Dixon’s team can create the illusion that the designer is there in person, when in fact he is in London standing in front of a green screen.

One of the first events of the day for Dixon’s hologram is an auction of signed Cloud prototypes at Bukowskis auction house. Other events on the agenda include a flower arranging workshop and a disco hosted with Swedish music tech company, Teenage Engineering.

“If people feel that you’re in a room, there are all kinds of things you can do which you can’t if you’re doing a Zoom conference,” said Dixon.

Despite the success of the 24 Hours concept, Dixon doesn’t believe that digital forms of presentation will ever completely replace the furniture fair.  Going forward, he believes that a mix of physical and digital presences are the key to success in this industry.

“The work that we do in this sector depends on being able to inhabit a space for real, not just virtually,” he said. “The smells, the luminosity, the squidge of a sofa; they are not replicable on screen.”

As part of Stockholm Design Week the Greenhouse showcase of emerging talent, which usually takes place as part of Stockholm Furniture Fair, switched to a digital format for 2021. Dezeen picked 10 of the best student projects on show.

Stockholm Design Week is taking place from 8 to 14 February. See Dezeen Events Guide for an up-to-date list of architecture and design events taking place around the world.