Misschiefs exhibition presents “a more punk side of Swedish design” 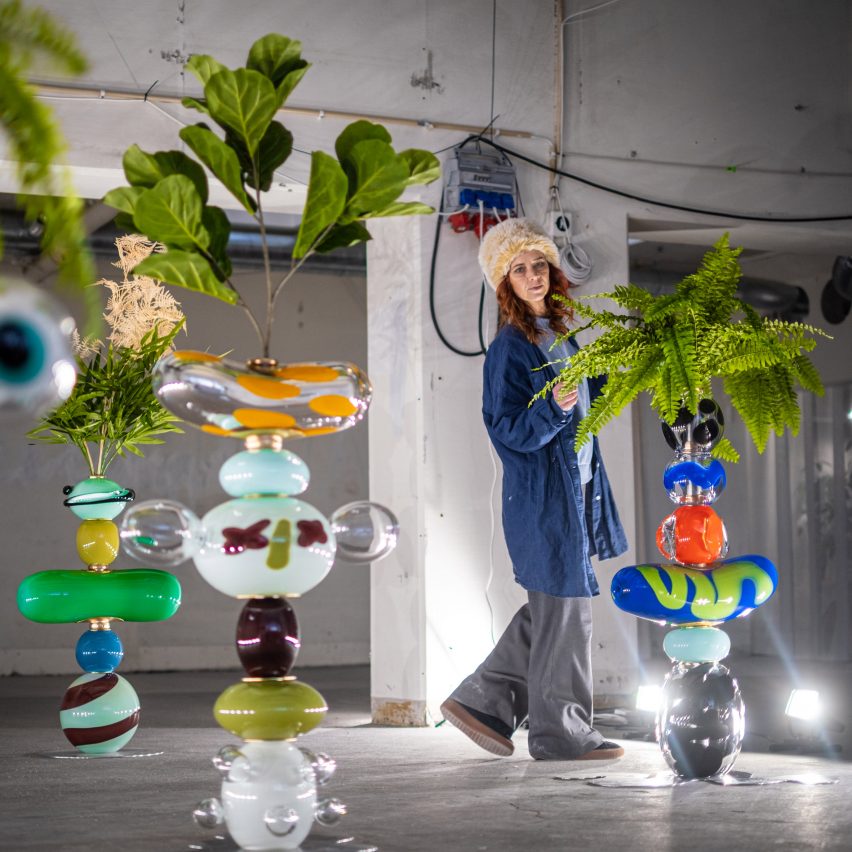 Housed in a former factory in the heart of Stockholm, the Misschiefs Takeover exhibition champions a more diverse and experimental approach to design than Sweden is traditionally known for.

Designers including Lotta Lampa, Kajsa Willner and Monica Förster have created a range of offbeat, self-motivated pieces that include characterful glass totems, a flame-like fibreglass bench and a series of slush-cast vases.

Misschiefs started out as a feminist collective, launched by Bjäringer in early 2020. The Swedish curator had recently moved to Stockholm, having spent most of her life in France, and was shocked by the lack of diversity visible in the city’s design scene.

“I thought it was quite male, boring and white,” she told Dezeen. “I wanted to present a more punk side of Swedish design.”

As Bjäringer got to know the city better, she found that the variety was there – it just needed a better platform.

Although she hadn’t intended to focus exclusively on women, the curator found that female designers were producing some of the most exciting ideas. So she decided to form Misschiefs as a collective of “womxn”, inclusive of trans and nonbinary women.

The current Misschiefs Take Over exhibition opened this week, as part of Stockholm Design Week, but Bjäringer and her team have been occupying the former laundry factory on Linnégatan 4 since August.

As well as being an exhibition space for completed projects, it has given artists and designers – many of whom lost their studios in the financial downturn of the Covid-19 pandemic – a space where they could produce work.

“Since I was in touch with all these women designers and artists who had been really badly hit by the crisis, it became very personal,” said Bjäringer. “It became a rescue operation.”

Some of the eight designers participating in the current exhibition have been involved since the beginning, while others are working with Misschiefs for the first time.

Lotta Lampa is presenting a series of large-scale pieces that include the Burns Out bench, which takes inspiration from “motif-painted raggar cars,” a take on the American 1950s hot rod cars that spawned a mainly countryside-based subculture in Sweden.

Malmö-based Kajsa Willner is exploring ways of minimising material consumption with her Emulate Nature vases, which she casts in tin using the scraps left over from her previous casts.

The glass totems were created by artist Frida Fjellman, using materials leftover from a sculpture she made for the National Museum, while Färg & Blanche co-founder Emma Marga Blanche worked with her partner, Fredrik Färg, to create a cabinet using a new textile they call “burn lace”.

Bjäringer won’t take commission for works sold through the exhibition, as she runs Misschiefs as a non-profit organisation. This is possible because the exhibition space has been given to her rent-free by a real-estate company sympathetic to her ambitions.

Misschiefs will continue to occupy this 500-square-metre space until March. With its city centre location, Bjäringer says it has already become a meeting point for creatives in the city.

With Stockholm Furniture Fair not taking place this year, it is one of the few large-scale exhibitions taking places during Stockholm Design Week.

“It’s become more of a human story than just a story about the objects,” said Bjäringer.

“In a pandemic time, where we have this big debate over whether culture is a luxury or a necessity, it has become a battle flag for cultural diverse art in Stockholm.”

Misschiefs Takeover is taking place from 9 to 13 February, as part of Stockholm Design Week. See Dezeen Events Guide for an up-to-date list of architecture and design events taking place around the world.

Photography is by Daniel Camerini.

The post Misschiefs exhibition presents "a more punk side of Swedish design" appeared first on Dezeen.