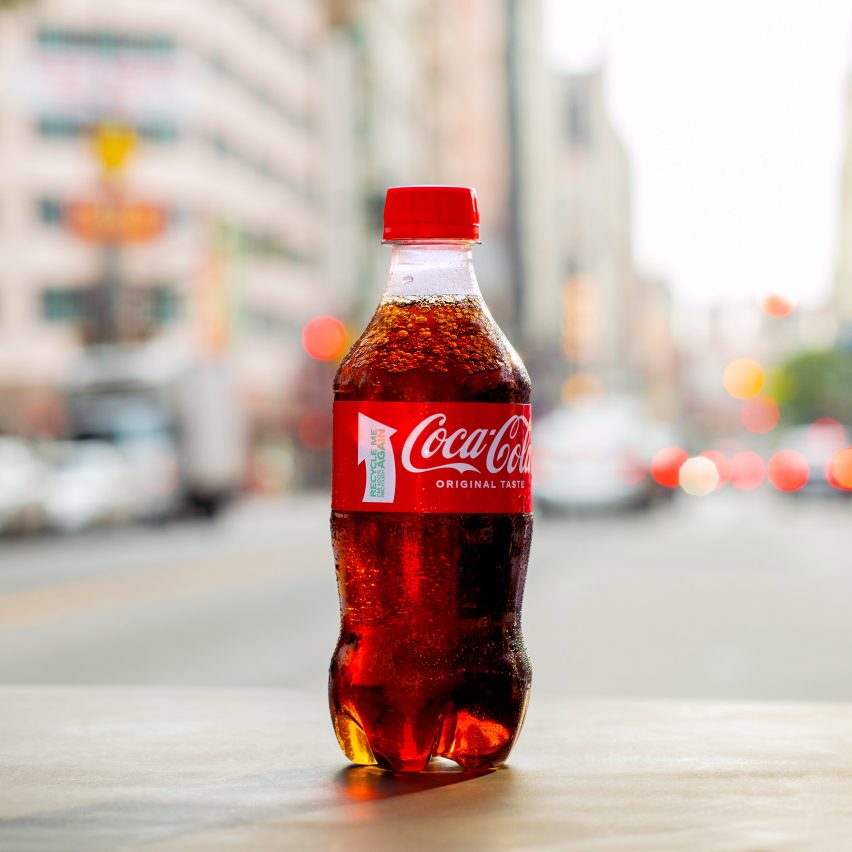 Designers and environmentalists have slammed Coca-Cola‘s efforts to tackle plastic pollution as “greenwashing” and “a huge step backwards in sustainability”.

The soft-drink brand’s target of a 20 per cent reduction in its use of virgin plastic in the US “simply don’t go far enough,” said sustainable design writer Katie Treggiden.

The Coca-Cola Company today pledged to introduce recycled plastic bottles for some of its products in a move it said would reduce its annual greenhouse-gas emissions by 20,000 metric tons.

“This is the equivalent of taking 2,120 cars off the road for one year,” said the brand.

But the initiative by the company, which is cited as the world’s worst plastic polluter, was widely condemned.

“Coca-Cola is trying to greenwash its business,” said designer Richard Hutten, who has spoken out about plastic pollution in the past.

“They state that plastic is one of the largest environmental concerns and that they will reduce the use of new plastic by more than 20 per cent,” he continued.

“That sounds nice but their part in plastic pollution will not be reduced at all and they will still remain the largest plastic polluter.”

“Coca Cola will need to do a lot more than this to change their status as the world’s top plastic polluter,” added Emma Priestland, corporate campaigns coordinator for Break Free From Plastic, an initiative that organises an annual audit of plastic pollution.

“For three years in a row, thousands of volunteers have collected more Coca-Cola-branded waste from more places than any other brand during the annual Brand Audit cleanups.”

This month, Coca-Cola will start using bottles made of recycled polyethylene terephthalate (rPET) in selected US states across a range of its brands.

This includes new “sip-sized” 13.2-ounce bottles, which are a little larger than a can, as well as an rPET version of the more traditional 20-ounce bottles.

It is a first step in the company’s mission to use at least 50 per cent recycled material in its bottles and cans by 2030. By comparison, rival beverage brand Evian has promised to use 100 per cent recycled plastic across all of its products by 2025.

According to Coca-Cola, this latest initiative will cut its use of virgin plastic by 20 per cent in North America compared to 2018.

But Priestland warned the move could actually make pollution worse.

“Coke’s introduction of a new small-sized bottle is a huge step backwards in sustainability, especially if this will be replacing cans which can be recycled endlessly,” she told Dezeen.

“Selling products in smaller-sized formats generally means more pieces of plastic created and sent out into the world. Each item of plastic causes environmental damage, regardless of how much plastic that item contains.”

“It also places an enormous burden on waste collection and recycling systems to have lots of small bits of plastic.”

Break Free From Plastic has found The Coca-Cola Company, PepsiCo and Nestlé to be the companies creating the most plastic pollution.

Break Free From Plastic’s latest pollution audit, published in December, involved 15,000 volunteers in 55 countries. Of the 346,494 pieces of plastic collected from the environment, 13,834 were from Coca-Cola products.

This was more than the combined number of items from Pepsi and Nestlé, who were the second- and third-worst offenders.