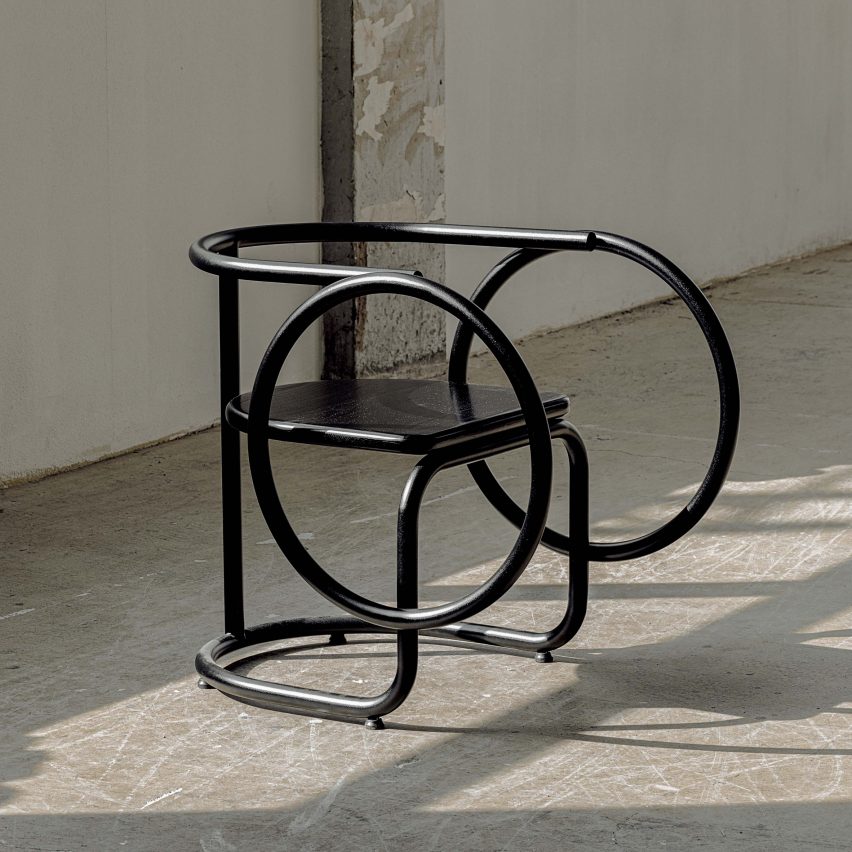 Symmetry and repetition distinguish the work of Subin Seol, who combines and contrasts the distinctive visual language of her native Korean with art deco to create unexpected furniture pieces.

The two artistic traditions have little in common at first glance, with one defined by decadence and the other by a rejection of it.

But the designer has managed to unify them within a four-piece collection, simply called Korean Art Deco, which won her the young designer 2020 award at last year’s Seoul Design Festival.

“Interestingly, the styles are completely different in appearance and different in direction, but they have similar elements,” Seol told Dezeen. “Therefore, it was not difficult to merge them in harmony.”

“I think the most distinctive features of art deco are symmetry and repetition. And symmetry is also one of the essential elements for the simplicity of Korean art,” the designer continued.

This is most distinctly seen in Seol’s Hoop Chair, which is divided into two perfectly identical halves by a slim, metal tube that runs along the entire length of the design like a central axis.

On both sides, the armrests extend into sweeping circles, rendered in sleek black metal that nods to the simple linework of seoye calligraphy.

While art deco, which emerged in France in the 1920s, often draws on sleek, futuristic materials such as glass or chrome, Korean architecture and ceramics have historically allowed the raw beauty of natural materials to take centre stage.

“The most important thing in Korean art is nature,” said Seol. “Our ancestors tried to keep away from artificial and excessive decorations and make things as natural as possible.”

In the collection, this manifests itself in a thick slab of ebonised oak, which holds a circular mirror at its centre. Here, the style’s generous, geometric shapes allow the intricate graining of the wood to shine.

The high and low U Stool, on the other hand, are both made from beechwood, with a high gloss finish reminiscent of Korean ottchil lacquerwork, which is made from the sap of the lacquer tree.

Their backrests are formed from a single piece of curved wood, which picks up the circular accents of the Hoop chair in a more gentle way.

“For example, the sloping, traditional roofs were modelled on the curves created by ropes when hanging them from the gable.

“Therefore, I was able to use lines more smoothly and I could give people more space to think and rest compared with the dense decorations of art deco,” she continued.

“Sometimes, the two different styles refer to each other. Other times, one is absorbed by the other or the two are equally balanced and influenced by each other.”

Young South Korean designers are increasingly focused on keeping the country’s craft heritage and techniques alive by reinventing them for the modern world. Among them is Design Academy Eindhoven graduate Sun Lee, who created a six-piece clothing collection using hanji paper.

Made from the bark of the mulberry tree, this was historically turned into curtains to help regulate the temperature in traditional hanok houses. But in this case, it is cut, torn and rolled to create fully recyclable garments.