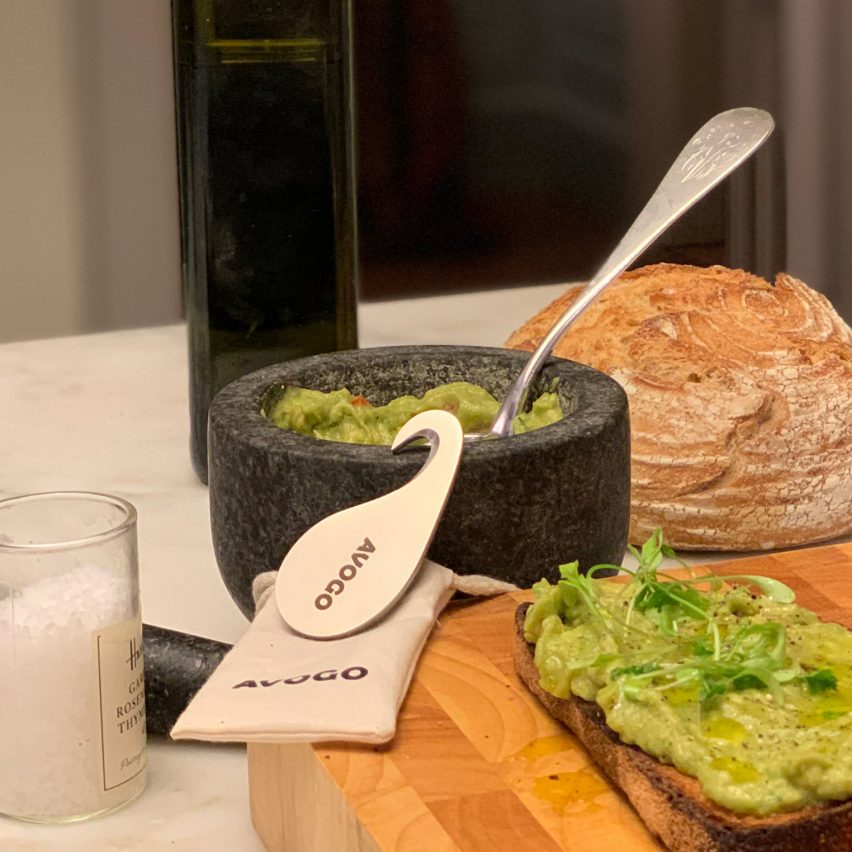 Brighton College student Pietro Pignatti has designed a compact avocado cutter that can be used to safely open avocados while on the go.

Named Avogo, the cutter was designed by Pignatti as part of a school project to create a functional product that solves an everyday problem.

“The concept was born when I encountered the problem of not being able to have breakfast in the mornings when travelling to school,” Pignatti told Dezeen.

“I would often take avocados on the train and felt uncomfortable bringing a knife on the train to cut open the avocado,” he continued.

“This led me to develop a product that could cut and de-stone an avocado on the go while retaining the elements of practicality and style.”

Designed as an alternative to a knife, the tempered steel tool has a small, curved blade that is hooked inwards to reduce the risk of injury.

“The most important part of the design was that it had to incorporate a hooked blade, curving towards the hand that you use to hold the Avogo. So if your hand slipped while cutting an avocado, it would be impossible to injure yourself,” explained Pignatti.

“The hook eliminates avocado hand, an increasingly common injury where people cut themselves while trying to open an avocado.”

Although other Avocado cutting tools exist, including the GoAvocado 3-in-1 tool released by kitchenware brand Joseph Joseph in 2018, Pignatti believes that the Avogo is unique due to the fact that it incorporates a metal blade and is extremely compact.

“Instead of being large and made with plastic like the well-know OXO avocado cutter, it is sleek and made by hand in Italy, with a focus on its design without giving up on its functionality,” explained Pignatti.

“It is smaller than what is on the market. We have designed it to be portable, so the blade is hooked and falls under the maximum restriction on knives, allowing it to be transported on the go.”

Pignatti entered the Avogo in the Design Museum’s Design Ventura contest in 2017, where it won first prize in the Independent Schools category. Following this, he created 250 units and sold them on Kickstarter.

Now the Avogo is being manufactured by Italian knife maker Coltelleria Saladini – a family-run business that has been manufacturing knives since the 1800s in the small town of Scarperia in Mugello.

Coltelleria Saladini has manufactured 150 units of the Avogo and all revenues from their sale will be donated to Chilean charity Modatima. Based in the country’s largest avocado-producing province, the charity campaigns for the ethical and sustainable cultivation of avocados.

Also aimed at improving knife safety, British cutlery brand Viners released a set with rounded tips in a bid to reduce knife crime. Other knives on Dezeen include the CK01 knife, which is made from a single piece of steel and was shortlisted in the homeware category of the Dezeen Awards 2019.