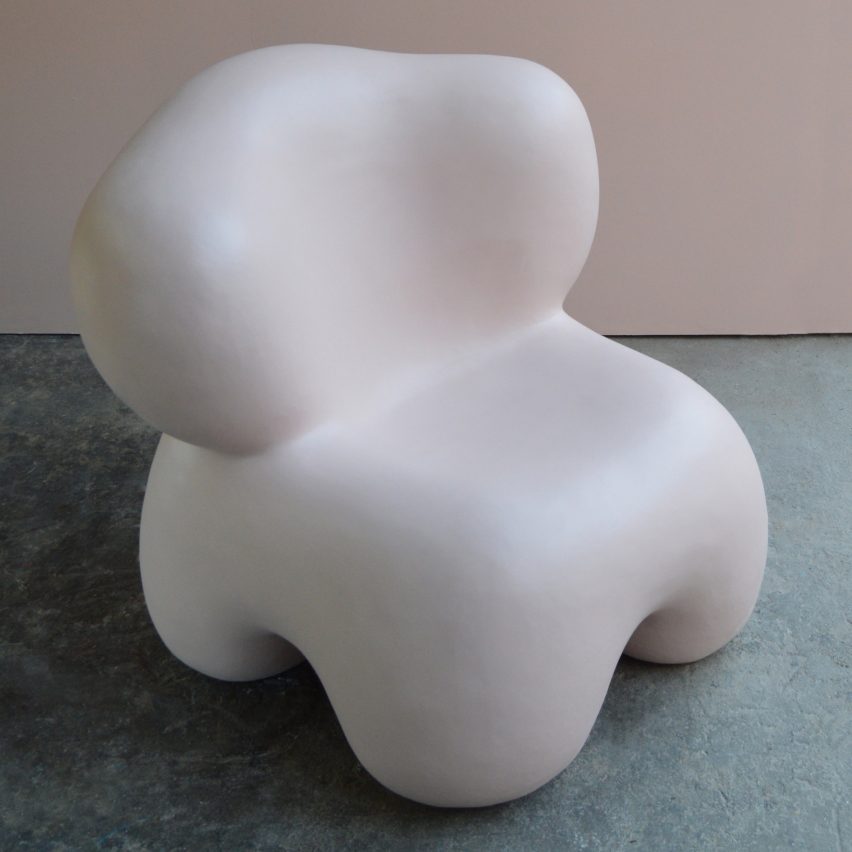 Completed in the Chelsea neighbourhood in 1929 by American architect Ralph Walker, the Walker Tower was restored and converted into apartments in 2013.

Named Galerie Philia at Walker Tower, the show is co-curated by architect and designer Pietro Franceschini and the anonymous founder of furniture gallery Galerie Philia.

The exhibition showcases over 70 works by 40 international designers.

Presented works include Infinity 12, an alabaster chandelier resembling a tunnel of smoke by Alain Ellouz, and a stool which is also a side table, handcrafted from subvolcanic rock by Georgian design duo Rooms as part of their Life on Earth collection.

“The common thread between the works can be expressed in a few key words: neutral colours, minimal but not reductive, and incredible craftsmanship,” Franceschini told Dezeen.

The exhibition space comprises a loft-style apartment spread across two floors of Walker Tower. This backdrop intends to straddle both a gallery and a real, liveable apartment.

The curators’ specific focus is how the works on display interact with each other, rather than the styling of the apartment itself.

“The idea was to establish a dialogue between the art deco architecture of the building, the omnipresent New York skyline and the collectible art and design pieces,” said Galerie Philia’s founder.

Set against white walls, the majority of the pieces share a colour palette of black, white and brass.

Einstein by Jérôme Pereira is an elegant floor lamp made of glass and wood resembling a cluster of matchsticks. Gold Arch Console, a brass table by Franceschini, is also exhibited.

These include a chubby chair and equally as plump stool named Elephante by Noon Studio, both made in light pink pigmented cement. Laurids Gallée’s Green Console, a translucent green resin table, also features in the pastel bedroom.

As co-curators, Franceschini and Galerie Philia’s founder are confident that minimalist design does not have to be reductive, despite acknowledging that this can often be the case. Their exhibition, they say, is different.

“Our minimalism is clear in its initial statement, but it also has a narrative that goes beyond a first impression,” explained Franceschini.

“Materiality and detail entice the viewer to look more closely,” he said of the works exhibited.

“What brings these works together as a coherent ensemble is their intrinsic quality, both aesthetic and conceptual,” continued Galerie Philia’s founder.

The Walker Tower is what Franceschini considers the ideal contrasting backdrop to the minimalist exhibition, with its “hybrid of brick volumes and metal ornamentation.”

In other gallery news, Jonathan Tuckey Design has converted a mews house into an art gallery in Paddington, London. David Chipperfield Architects has added a limestone-clad extension to the Kunsthaus Zurich museum in Switzerland.

Galerie Philia is a contemporary design and modern art gallery, representing both emerging and established designers and artists internationally. Pietro Franceschini is an architect and designer who runs his own furniture and interior design practice.

Photography is courtesy of Galerie Philia.

Galerie Philia at Walker Tower will run from 15 February – 20 May. See Dezeen Events Guide for an up-to-date list of architecture and design events taking place around the world.