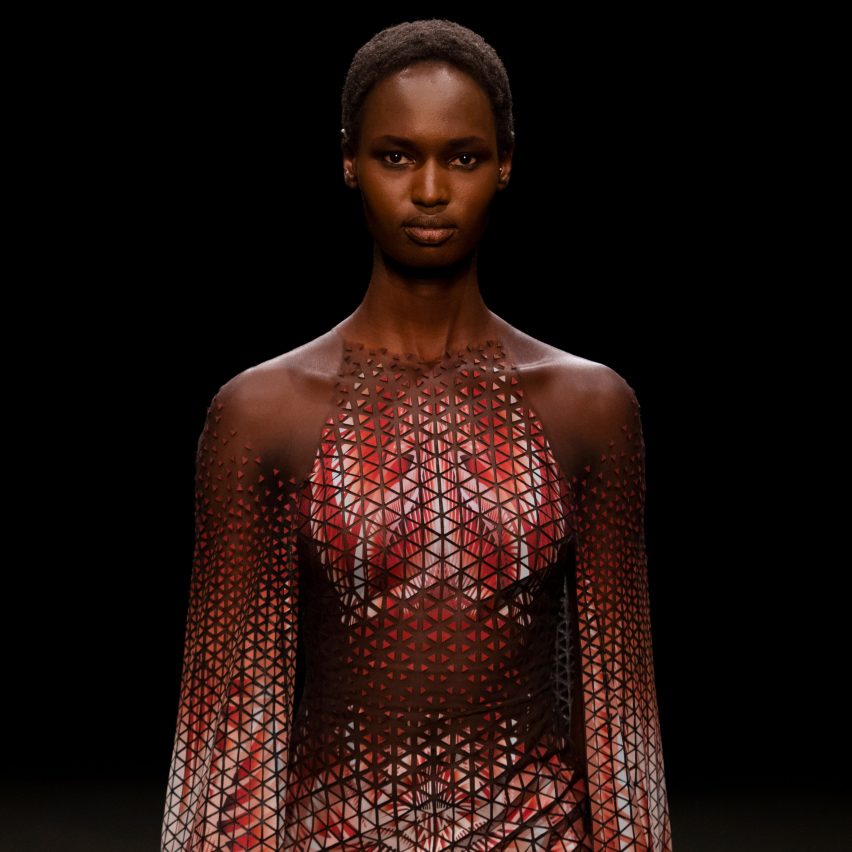 Fashion designer Iris van Herpen has unveiled a haute couture dress constructed from ocean plastic fabric produced by Parley for the Oceans, which was cut into trilateral pieces to form a tessellated, translucent garment.

The dress forms part of Van Herpen‘s Roots of Rebirth Spring/Summer 2021 collection, which referenced “the intricacy of funghi” and the interconnectedness of mushrooms and especially mycelium, the tubular filaments that funghi use to grow.

Van Herpen used a variety of different materials when designing the collection, which consisted entirely of dresses.

For the sixth look on the catwalk, the Holobiont dress, Van Herpen used Parley for the Oceans‘ trademarked Ocean Plastic fabric.

The material is made from upcycled marine waste, sourced from the estimated eight million tons of plastic waste that end up in our oceans every year. Parley for the Oceans collects plastic debris from shores and oceans, which is shredded and reworked into yarn.

Implementing these kinds of sustainable and recyclable materials into the collections is an ongoing development in her atelier, Van Herpen told Dezeen.

“We do a lot of material development in-house and we also collaborate with companies and institutes globally, like Parley for the Oceans,” she said.

“Parley for the Oceans has great expertise in recycling plastic from the ocean and transforming it beautifully into soft upcycled fabrics. The quality of their fabrics is really refined, and therefore perfectly suitable for haute couture also.”

For the Holobiont dress, the designer first printed the fabric before laser-cutting it parametrically into fine triangle tessellations, in order to create a “translucent and fragile interconnectedness” with the skin.

According to Van Herpen, the refinement of the weave is what makes the fabric so suitable for haute couture design.

“It’s mesmeric to see such fine fabrics that were made from 100 per cent recycled fabric from the oceans,” she said.

“When most people think of recycled fabrics, they think of stiffer, less appealing materials. But that is history now, partly thanks to Parley – the quality of the recycled fabrics is now so high that it is usable for even high-end couture looks.”

Other sculptural designs in the collection included a dress featuring “fine-edged liquescent gills” that had been 3D-printed onto expandable lace, and another with pleated glass-organza fabric that branched out from a bodice to form a kind of textile fractal network.

Van Herpen recently created a laser-cut dress for singer Lady Gaga to wear at the VMAs in 2020. Last year, the designer spoke to Dezeen as part of our Virtual Design Festival in three exclusive video interviews.

Photography is by Gio Staiano unless otherwise stated.