Designers make desktop computers and mice out of honey and ice 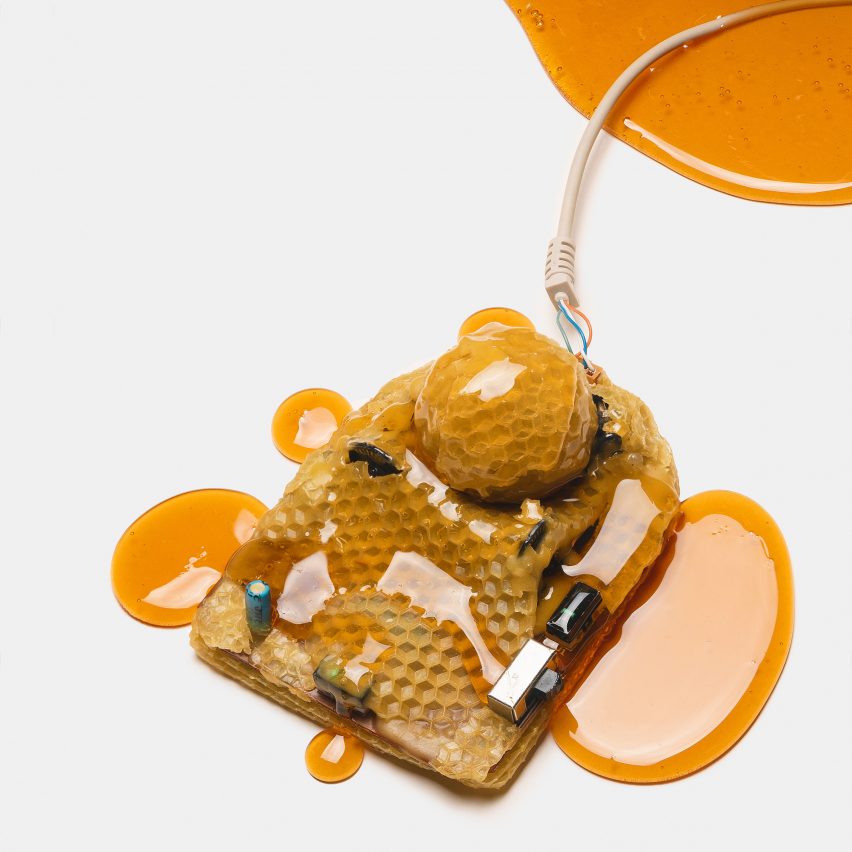 Industrial designers Hank Beyer and Alex Sizemore have made prototype computers from unconventional materials such as ice and honey to explore how people value emotional connection versus usability.

Called For the Rest of Us, Beyer and Sizemore made the retro desktops from the regional materials that can be commonly found in the US states of Ohio, Kentucky, Michigan and New York.

As well as ice and honey, the project comprises desktops and accessories such as mice made from coal, limestone, sandstone, lard, peat and clay.

The designers hope that their project will prompt a range of emotional responses, from the inquisitive to the humorous.

Beyer and Sizemore said they wanted to question the nature of everyday objects in a consumerist society by selecting materials picked solely for their emotional value, rather than their usability. Some of the computers are operational, whilst others are mockups.

“Our computers aren’t meant to be realistic proposals for the future of computing,” Beyer and Sizemore told Dezeen.

“They are symbols of how simply shifting an object’s material can change the relationship between people and the products they interact with,” the designers explained.

The designers used the familiar archetype of a desktop computer in order to make their project relatable. The computer, they decided, is “one of the most recognisable objects of the past three decades.”

For the Rest of Us is named after the tagline of an Apple advertisement campaign from the 1980s. The campaign’s tagline was “Introducing MacIntosh. For the rest of us.”

“Apple was claiming that existing computers were too complex and technical, while the MacIntosh was designed for everyone,” Beyer and Sizemore said.

“We wanted to further develop this idea by reconsidering not only how a piece of technology works but also how it relates to emotions.”

The project’s photography is also meant to visually reflect the Apple adverts.

Beyer and Sizemore said they picked regional materials because they were living in Ohio at the time and wanted to explore how local materials can invoke an emotional response or a connection with a particular community.

“For us, ‘regional materials’ means materials with sources that we can travel to and access to experience and better understand the material’s origin, related processes, and immediate community,” they said.

They spent time in their chosen regions in order to unpick each material’s history and associated process, as well as the people and politics attached to it.

The designers compiled their visual research into a book which accompanies the computer prototypes made from the materials that they investigated. In each section, there is a removable leaflet with information about each material.

Hank Beyer and Alex Sizemore are industrial designers who began collaborating on projects when they met at the University of Cincinnati. The pair work together as one studio in California.

Several other contemporary designers have explored how using unusual materials to make everyday objects can provoke an emotional response, such as Dewi van de Klomp’s floppy shelves made of foam and spiky aluminium chairs made by Orson Oxo Van Beek and Quinten Mestdagh.

Photography is by Hank Beyer and Alex Sizemore.

The post Designers make desktop computers and mice out of honey and ice appeared first on Dezeen.