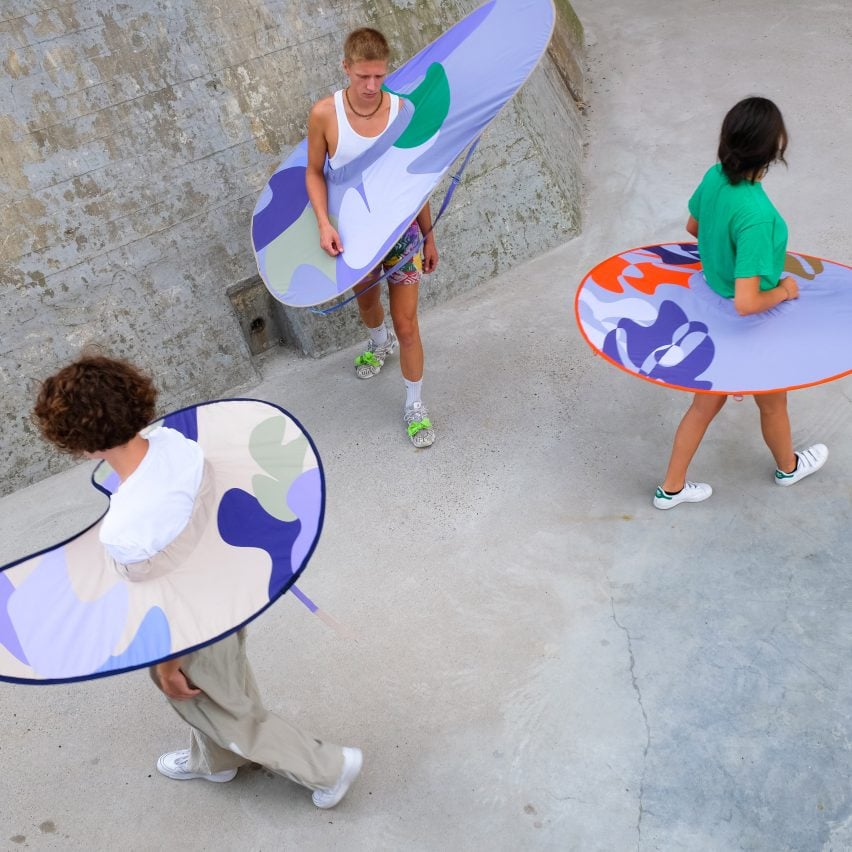 Design Academy Eindhoven graduate Anna-Sophie Dienemann has developed a line of accessories to encourage social distancing that can be unleashed by the wearer when others come too close.

Named the Bounding Spaces collection, Dienemann’s design is one of more than 500 projects that were submitted in response to an open-call from the London Design Biennale and international policy think tank Chatham House.

Under the theme Design in An Age of Crisis, it invited proposals from all over the world on how we can tackle some of the most pressing issues facing humanity today.

Dienemann’s contribution focuses on the ongoing coronavirus pandemic and is comprised of seven “distance keepers”. These are designed to be strapped to the body much like a holster and can be unfurled like a pop-up tent with one simple movement to create a barrier around the wearer.

Made of lightweight, water-resistant fabrics, the accessories are reinforced with the same spring steel wire that helps the tents to keep their form.

“Through adding piping to the fabric’s outline and leading spring steel through it, the distance keeper naturally gets pulled into its shape,” Dienemann told Dezeen.

“The much bigger challenge was to achieve a compressed version that acts as a beautiful accessory and transforms right on the body into its distance creating shape.”

With the final, extended shape as her starting point, the designer draped and folded the frames to create figure-hugging silhouettes.

When compressed, these resemble sculptural ornaments, cast in camouflage-esque, technicolour patterns, that dangle off the shoulders or envelop the torso.

“A little belt secures the twist, such that the accessory doesn’t open when moving,” the designer explained.

“Through releasing the belt and giving it a little pull, the accessory pops up. And when it is no longer needed, bending the spring steel towards the body makes it snaps back into its compressed shape.”

The piping is cast in saturated colours to help frame the wearer’s personal space and indicate that others should give them a wide berth.

As a fashion design student, Dienemann’s aim was to create pieces that would be as striking in their compressed shape as when they are spread out, so that they could happily be worn for a whole day.

“I wanted the project to be understood not as a technical solution for social distancing but as a fashion statement to remind people of the importance of keeping distanced in public,” she said.

“Therefore I wanted to create accessories people would like to wear not only to create distance but also to add something to their outfit.”

Bounding Spaces is currently on view in an online gallery that chronicles all of the projects submitted to the Design in An Age of Crisis open call. A selection of highlights will also be exhibited at Somerset House as part of the London Design Biennale in June.