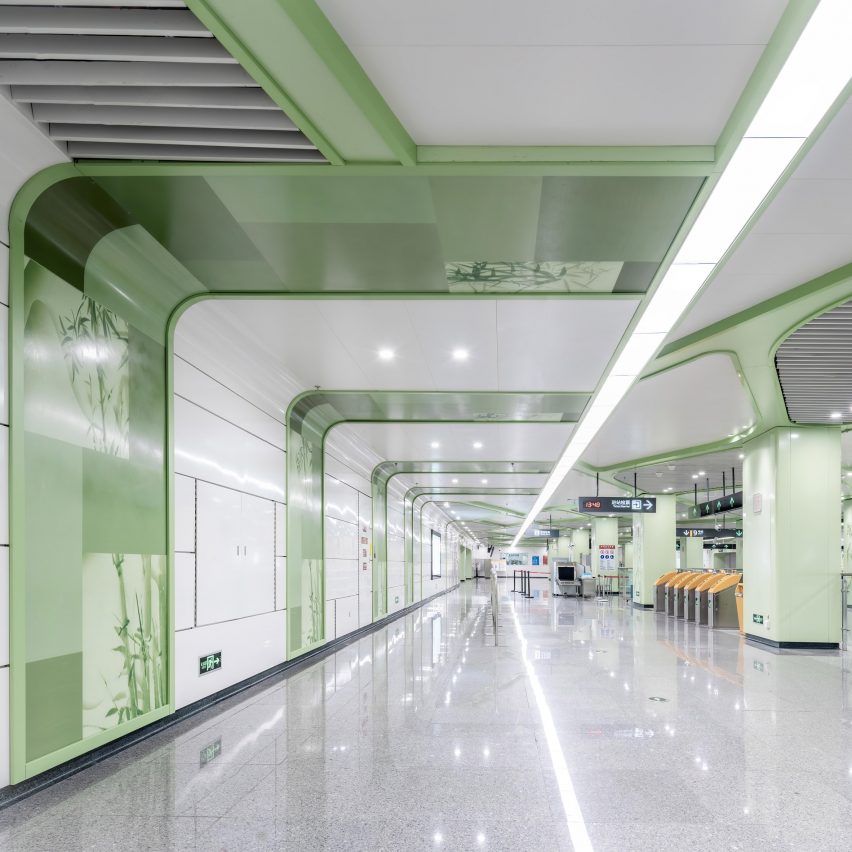 J&A and Sepanta Design have created a series of station interiors based on forms and patterns found in nature for the first unmanned metro line in Chengdu, China.

Designed to provoke emotion among their visitors, the 13 stations feature fluid forms and cellular patterns informed by the local tradition of silk weaving as well as the flora and fauna found in surrounding parks.

The fully‐automatic, 22-kilometre line has been under construction since 2016 and forms an extension to the existing Chengdu Metro system.

Called Line 9, it runs between the southeast and northwest of the Sichuan Province’s capital and is the first unmanned metro line in the west of China. Instead of drivers, Chengdu’s new trains communicate with each other using the 5G mobile network.

All of the line’s 13 stations are designed by Shenzhen firm Jiang & Associates Design (J&A) in collaboration with London-based studio Sepanta Design.

According to the designers, their ambition for the project was to create spaces that would “entirely change people’s expectations” of what metro stations could be like.

“Chengdu metro stations are not going to be merely points of transit,” said Reza Esmaeeli, founder of Sepanta Design and Design Director at Chetwoods Architects. “They are going to be memorable spaces that offer their passengers an artistic and futuristic expression of their own culture.”

The stations’ interiors were designed to reflect points of local, cultural interest, with the line passing through the birthplace of Sichuan silk and embroidery culture as well as a number of urban ecological parks.

The four feature stations — Incubation Park, Jincheng Avenue, Cuqiao and Jitouqiao — each have a unique concept, reflecting their local environment.

These themes are explored through distinct colours and materials, alongside bespoke furniture.

At Jincheng Avenue Station, for example, the ticket hall is illuminated by curved, lilac-coloured columns reminiscent of lotus flowers in a nearby lake, while lights that resemble silkworm cocoons are installed across walkway ceilings at Cuqiao Station.

The other nine “standard artistic stations” have a more uniform design, based on an abstract interpretation of embroidery techniques.

These techniques are translated into flowing, continuous lines and patterns made up of interconnecting, cell-like forms, which are repeated across ceilings, walls, floors, columns and furniture.

Chengdu’s Line 9 follows in the footsteps of other Chinese cities such as Shanghai and Guangzhou, which introduced driverless metro lines in 2010.

In Hong Kong, Ponti Design Studio has created a concept for an autonomous, double-decker tram with a radial interior design that encourages a safe return to public transport after the height of the coronavirus pandemic.

Photography is by CHAPA.

Friedman Benda showcases furniture pieces with a story to tell